Finals Day for the Billabong Pipe Masters presented by Hydro Flask is less than 24 hours away, and with all the World Champs, some grindy Championship Tour stalwarts and a potential Cinderella story in the making, the question is: what's the dream Final matchup?

Eleven-time World Champ Kelly Slater vs. rookie Jack Robinson is the first heat to hit the water when competition resumes. Jack has been living up to the hype, dropping the highest heat total thus far and looking tack-sharp. Meanwhile, Kelly, the most successful surfer in the history of Pipe with seven Masters trophies to his credit, has been making heats and is relishing the opportunity to halt Jack's impressive run.

"There are but a few heats left in my career that I would write down on a wish list that I haven't had the chance yet. This one with Jack Robinson at Pipe/Backdoor is right at the top of the list," wrote Kelly on Instagram. "

Whoever wins that battle will have to face Jordy Smith. Jordy has devoted time and energy to figuring Pipe out. He's bought a home on the famed stretch of beach and been putting in the work, which showed in his performances thus far. A Jordy/Kelly matchup in the Quarters plays in the GOAT's favor as Kelly has beaten Jordy in five of their last eight heats. 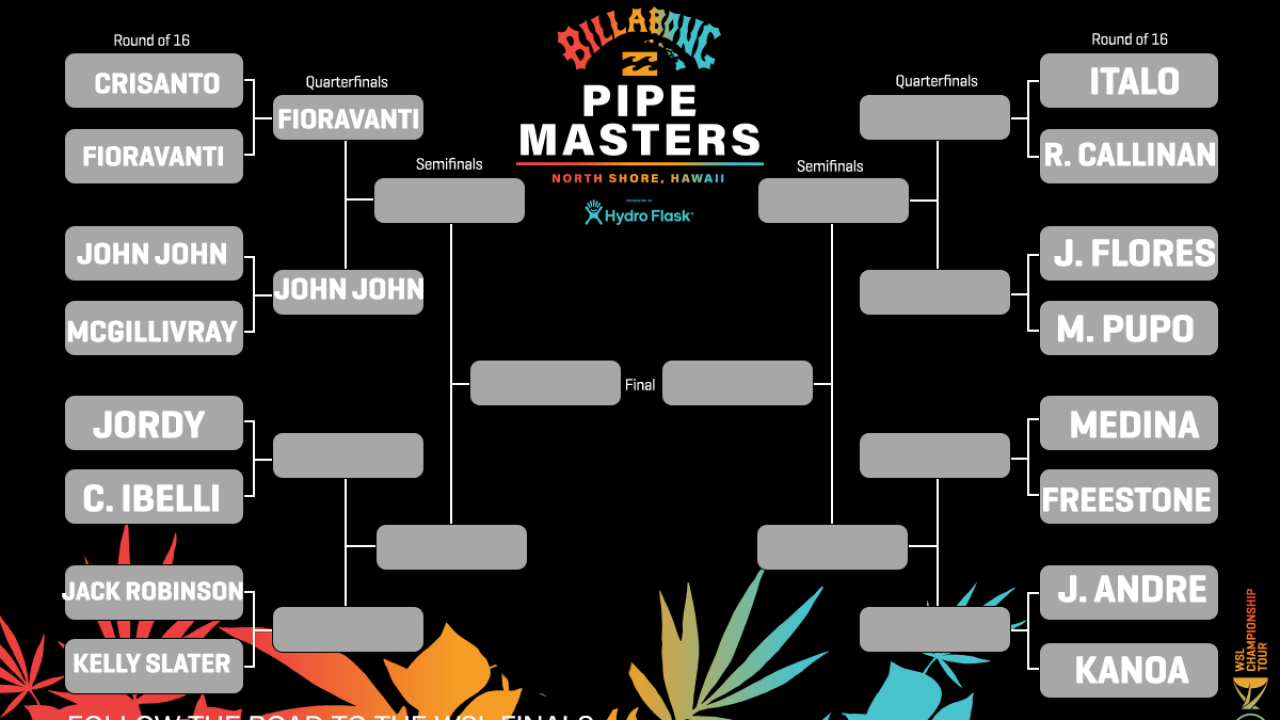 Bracket for Finals day of the Billabong Pipe Masters Presented By Hydroflask. - WSL

Hypothetically speaking, let's say that John John gets by Leonardo Fioravanti, which is no easy task given how on fire Leo been as of late. Leo seems to be the Cinderella story of this comp, but when that clock strikes midnight will his magic chariot turn to a pumpkin? John's local knowledge could be too much for Leo. In that case, we'd have ourselves a John vs. Kelly Semifinal -- which would be insane! Kelly has the advantage against John John with six wins to John's two in head-to-head competition.

On the other side of the bracket lies Brazilian World Champs Italo Ferreira and Medina, as well as Pipe Master Jeremy Flores. Italo's going up against Ryan Callinan, who has been surfing really well in recent showings, not only packing Backdoor bombs on his backhand but also threading Pipe tubes. But Italo's ingenuity and bag of tricks could be too much for Ryan to handle.

Medina matches up against Jack Freestone, who is looking greatly improved, even proclaiming his bid for a World Title campaign in 2021. Jack tallied three excellent scores in his first two heats, but this is Gabby we are talking about, he's a two-time World Champ, Pipe Master and holds the highest winning percentage at Pipe out of anyone on Tour. Point being, the guy knows how to win heats at Pipe.

If things shake out, we could have a rematch of last year's Pipe Masters Final featuring Italo and Gabriel. A little surprisingly, Italo has the best of Gabriel with a 6-2 advantage in head-to-head matchups. It's worth noting, two of these heats have been Finals with the boys splitting it with one win apiece.

As far as the Pipe Masters Final goes, John and Gabriel both have two World Titles and the race to get to three is definitely on both of their minds. John has yet to win a Pipe Masters, but he has won Pipe Pros. Gabriel leads the rivalry 6-4, including their last battle at the 2019 Pipe Masters Semifinals. Could this be the heat where John takes back his throne as the most feared surfer at Pipe?

Whatever these outcomes maybe, it's clear we have a massive Finals day on the horizon.

Gabriel Medina's Win-At-All-Costs Approach Make Him A Dangerous Man At Pipeline
1:47
The two-time World Champ and Former Pipe Master's iron will has forged him into one of the most successful Pipe surfers ever.