Darren Handley grew up on the Gold Coast was pushed into his first waves at Kirra aged 12. He became a local stand out and was sponsored by the legendary surfboard label Pipedream. He started sweeping the floors of the Pipedream factory, then learned the trade under head shaper Murray Bourton before leaving to start his DHD label almost 30 years ago. Mick Fanning and Stephanie Gilmore have won a combined 10 World Titles on his shapes and his current CT roster includes Ethan Ewing, Owen Wright, Malia Manuel, Caio Ibelli, Bronte Macaulay, and Isabella Nichols. The WSL caught up with Darren at his home after a day of waves on the Superbank.

WSL: How different are the surfboards for your different CT team riders, apart from the obvious weight and height changes?
DH: We use a lot of different models for the different surfers. However, I would say many are based on the DNA model that have I worked on with Mick for years. So as an example Ethan Ewing rides the DNA, just with a lot more rocker, a narrower nose, and different volumes.

Speaking of Ethan his surfing in Hawaii this season seemed to be on a whole new level. It seems like many of the surfers are sticking with their own shapers, even in Hawaii.
The Hawaiian shapers were always so far ahead for making boards for the waves there. However, in the last five to 10 years I think international shapers have been starting to catch up. Credit to those Hawaiian shapers, they have led the way and shared their knowledge. Now though the surfers are feeling much more comfortable with their own shapers on the North Shore. It's like high-end racing cars and the athletes want their own equipment dialed in and ready to go when they arrive. 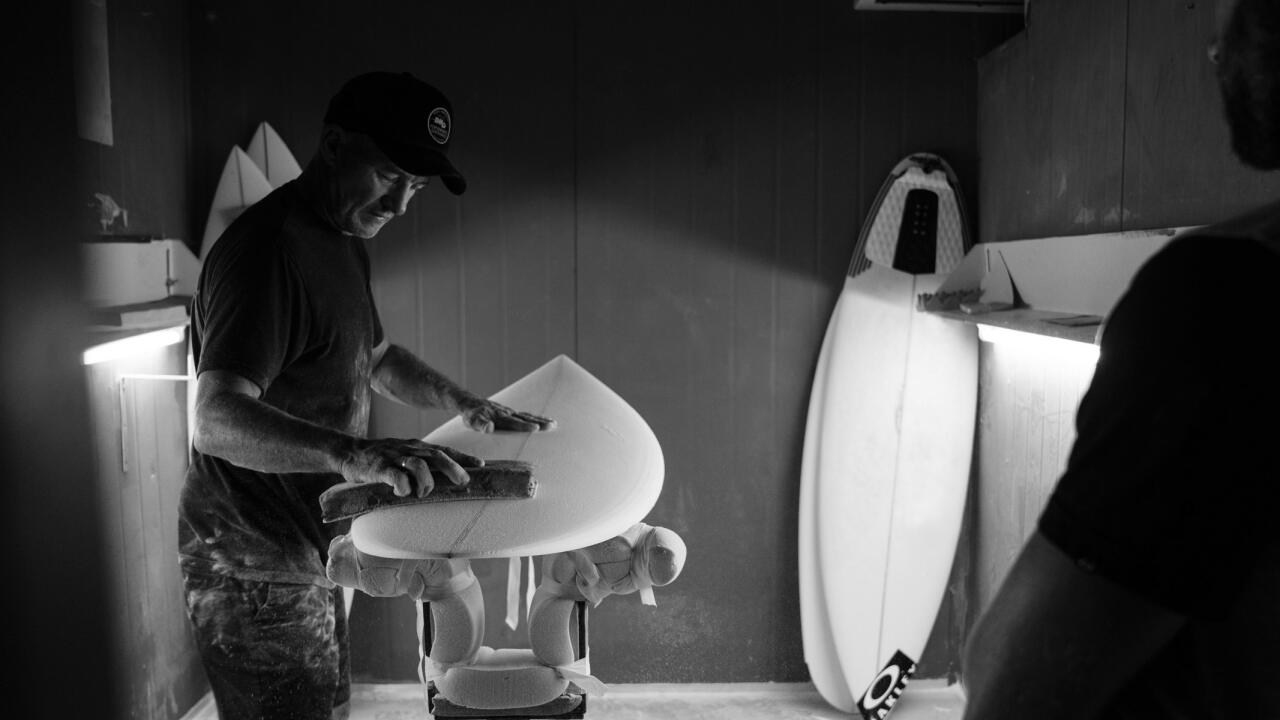 Darren Handley in the bay. - WSL

Do the designs for the CT riders change much over time, or are they pretty much set in their ways?
One of the most interesting surfers for me right now is Owen Wright. He's 6'3" and when he first came to me he was riding 6'3" as a shortboard. A few years ago we went to the Surf Ranch for an Olympic camp and on the last day he rode one of Wilko's model. It was a 5'11 and he felt he had so much more control over it. While he is a big guy, he is riding the same size waves as his competitors and he wanted to be on similar-sized boards.

What was the process to make that happen?
We used some of the rocker from Wilko's model, some from the DX1 and the DNA model he was using. With extra width in the nose and rounder tails, he is now on a 6'0" or 6'1". So it's not a model, but for him, it really is a model. He wants his name on it, so if he wins a few CT events, the big O model might come out. I surfed with him at Lennox the other day and I feel like he's surfing the best since he won in New York all those years ago and was No 2. in the world. It's so exciting to see him progress after all the work we've put in. Did last year without competition change the way you shaped for your team?
Last year was a time to take a breath. I wasn't just churning out the same boards. We had time to try different things and fresh approaches; more volume or less volume or changing the fin placement. There was no pressure or deadline so it was a relaxing year that was great for R&D. It was also great just to hang and surf with the team.

How important are those personal relationships?
My job is to look after the team, to listen to the surfers and get the best out of their surfing. With Ethan, his style, strength, and commitment mean he is just primed to go and we have spent a lot of time together. That's how your team riders become your mates. It also allows us to be honest with each other. He can tell me if a board is crap and I can tell him if he isn't surfing as good as he thinks he is. It's a two-way relationship and you gotta be there on the beach or in the water getting it first hand. I've had incredible friendships with Mick and Steph, and it's such a joy to form those new bonds with the next gen coming through.

How much do the pros boards designs feed into the boards you sell to average surfers?
Well, I'm finding that as I get older, I am that average surfer and so I'm really interested in what goes well for me. I've real skin in that game now and both sides converge. So going back to Owen and those wider nosed, shorter boards with flatter decks, less concave, round tails, they work for bigger guys, but also in smaller waves and for surfers of all abilities. It all feeds back in.

Finally, what's exciting you in your shaping right now?
The Olympics is a big focus, assuming they go ahead, and I have Owen and Steph surfing in Tokyo. So I'm striving to get boards that would work in those Japanese waves. Look, no one remembers who got silver or bronze, so a Gold medal is a real focus.