That two-time World Champion Gabriel Medina had decided to employ a new coach after a career on the road with his stepfather, Charlie Rodrigues, was one of the biggest pieces of news going into the Australian leg of the Championship Tour.

It seems to be working for him though, after a second-place result at the Rip Curl Newcastle Cup presented by Corona and no shortage of the explosive surfing he's famous for.

Andy King, who has also helped fellow Rip Curl athlete Mick Fanning to two of his three Titles provides a different suite of skills for the Brazilian than Charlie, who is now concentrating of shepherding Sophia Medina, Gabriel's sister, to a similar realm of success.

"So, I was just thinking about everyone, I want to let my dad do the job with my sister that she needs more than me and right now, I'm getting older and I feel like I can do it by myself and to have Andy in my corner really gives more confidence, because he's a great surfer, he understands about surfing a lot and yeah, it's been fun," Medina told the WSL.

Gabriel Medina Lofts A Ridiculous Punt Sending Him To The Final
0:34
With a score of 9.70 Gabriel Medina's massive air earns him the highest single wave score in the men's event so far.

Charlie has been right there for all the biggest moments of his son's career, but it seems that it is the technical specifics of his approach that Medina has turned to King for some assistance with.

While it's hard to imagine Medina needing any tweaks to his technique, he's searching for that extra half a percent that will help take him to more World Titles, especially from someone who understands what it's like to be a goofy-footer on a tour tacked with rights.

"I wanted to get out of my comfort zone, you know. I wanted to try something different, because I'm getting old, I know my sister is coming up, you know, my dad's going to take care of my sister ... I'm pretty sure she will be here one day and he's the right guy to do it," Medina said after his Round of 32 victory against Connor O'Leary at the Rip Curl Newcastle Cup presented by Corona. 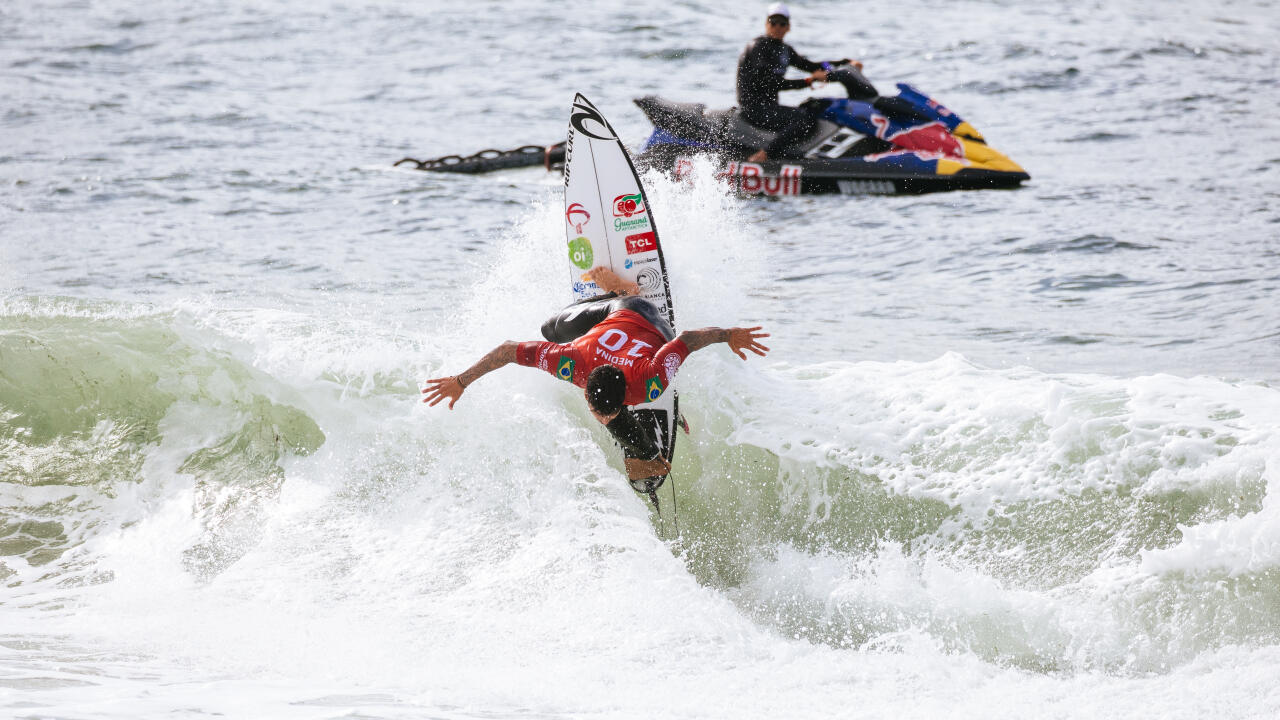 Gabriel Medina says King, a fellow goofy-footer, can help with the technical side of his surfing. - WSL / Cait Miers

The decision came around the same time as Medina's marriage to Yasmin Brunet, who has traveled with him to Australia, and seems part of a broader shift in Gabriel's life on Tour. He seemed relaxed in Newcastle. Laser-focused, sure. But there was a perceptible contentedness which has coincided with the change.

"There are a lot of things that he [Andy] tells me that he feels on the board as well, because he's a goofy, he surfs good, everything that he tells me, even the rail, speed or something ... I know what he's telling me, you know, because I feel the same [thing]."

"There's little things that I didn't pay attention [to] much, because it's natural, I go there, I surf but there's a few things I am paying attention [to] right now that can be the difference." What are you going to get when you marry this wave up with one of the best goofy-footers the world has ever seen? Anything's possible, and it's guaranteed it will be exciting. - WSL

"He's giving me the confidence to do it, so that's the guy I need on my corner and to have that knowledge of being a goofy and being a local here is a big advantage, so I feel good."

With the next stop of the Australian leg of the Tour set to go down at the high-performance left-hander of North Narrabeen, and Medina smarting from a runner-up finish to his countryman Italo Ferreira, expect some fireworks.