Tuesday July 27, 2021, concluded a momentous day in surfing history where the first two Olympic Gold medals for the sport of surfing were awarded. Brazil's Italo Ferreira and the U.S.A.'s Carissa Moore took home the highly coveted medals with their stand-out performances in a host of challenging conditions. From the team of photographers at the ISA, here are the defining moments that set the stage for surfing's debut in the Olympic Games:

Known as Shidashita Beach to locals, the venue offered challenging conditions for the world's top 40 surfers to compete in. Located in the eastern region of Japan, known for it's long stretch of coastline and surf, the waves and conditions were brought in by the Tropical Cyclone Nepartak, allowing for chest- to head-high waves during the finals day of competition. The Sands Of The World

Sands brought by teams from all over the world were poured into a glass case during the opening ceremonies, a tradition that has been know to the International Surfing Association for many years. The tireless efforts of ISA President Fernando Aguerre played a large role in surfings debut in the Olympics during the 2020 Tokyo Games. 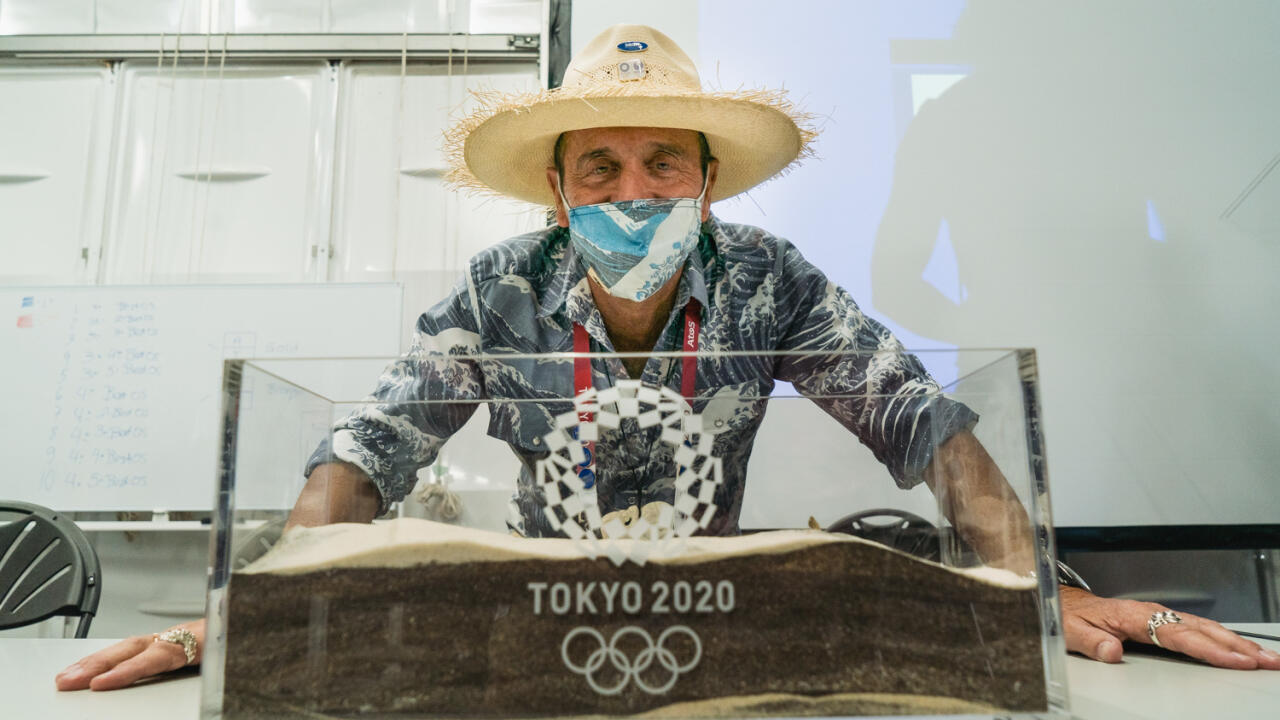 ISA President Fernando Aguerre poses with the sands of the world of each participating Olympic country. - ISA/ Pablo Jimenez

Japanese surfers Kanoa Igarashi and Amuro Tsuzuki made the podium on both the men's and women's side of competition. Japan was the only country to go home with two surfing medals, showcasing the home court advantage over the rest of competition. The waves and conditions made it difficult to know where to sit and the extra time that these surfers had to understand the waves showed on Finals Day. 20-year-old Amuro Tzusuki represented the host country of Japan in the Olympic Games and showed her mastery of the unruly waves of Tsurigasaki Beach. - ISA/ Ben Reed

The Upsets That Made Waves

In the early rounds of Olympic competition, some of the top gold medal favorites were knocked out in some stunning upsets. Australia's Stephanie Gilmore was defeated by South Africa's Bianca Buitendag, John John Florence was defeated by fellow American Kolohe Andino, and Gabriel Medina was taken down by Japan's Igarashi. The U.S.'s Kolohe Andino takes down John John Florence in Round 3, advancing onto the Quarterfinals. - ISA/ Pablo Jimenez

Italo Ferreira started surfing in a small fishing village in the northeastern region of Brazil. He worked his way through the Qualifying Series to compete on the World Championship Tour, winning the World Title in 2019 and competing in the Olympics as the top seed.

"All of my accomplishments have been important to me, but I think this Olympic Gold means the most because I was the first one," said Ferreira. "This has been quite a story for me. I started surfing on a cooler top when I was a kid before I got my first real board and won my first event. Because of [my upbringing] I have a lot of passion for the sport." Italo Ferreira of Brazil is carried up the beach after winning the Gold Medal for his country during the 2020 Olympic Games. - WSL / ISA/ Sean Evans

Four-time World Champion and native Hawaiian surfer Carissa Moore continued on the legacy of her culture for the world to see. Moore proudly carried the legacy of Hawaiians that came before her in the sport of surfing by clinching the first Olympic Gold Medal in surfings history.

"The scale of this event felt so much bigger," said Moore. "Getting to share the sport with so many people that maybe have never even watched surfing was super special. As a Hawaiian, just seeing Duke Kahanamoku's dream come true to have surfing in the Olympics is super special. It's a big time for surfing to be recognized on this level." Carissa Moore goes in for a huge carve on her front hand at Shidashita Beach on July 27, 2021. - ISA/ Ben Reed

The Women Who Made History

Standing proud on the Olympic podium: Amuro Tsuzuki (JPN) Bronze Medalist, Bianca Buitendag (ZAF) Silver Medalist, and Carissa Moore (USA) Gold Medalist. Starting off in a pool of 20 women from countries across the globe, these top three surfers were able to fight their way to top through challenging conditions and make history as the first three women to win Olympic medals in the sport of surfing. 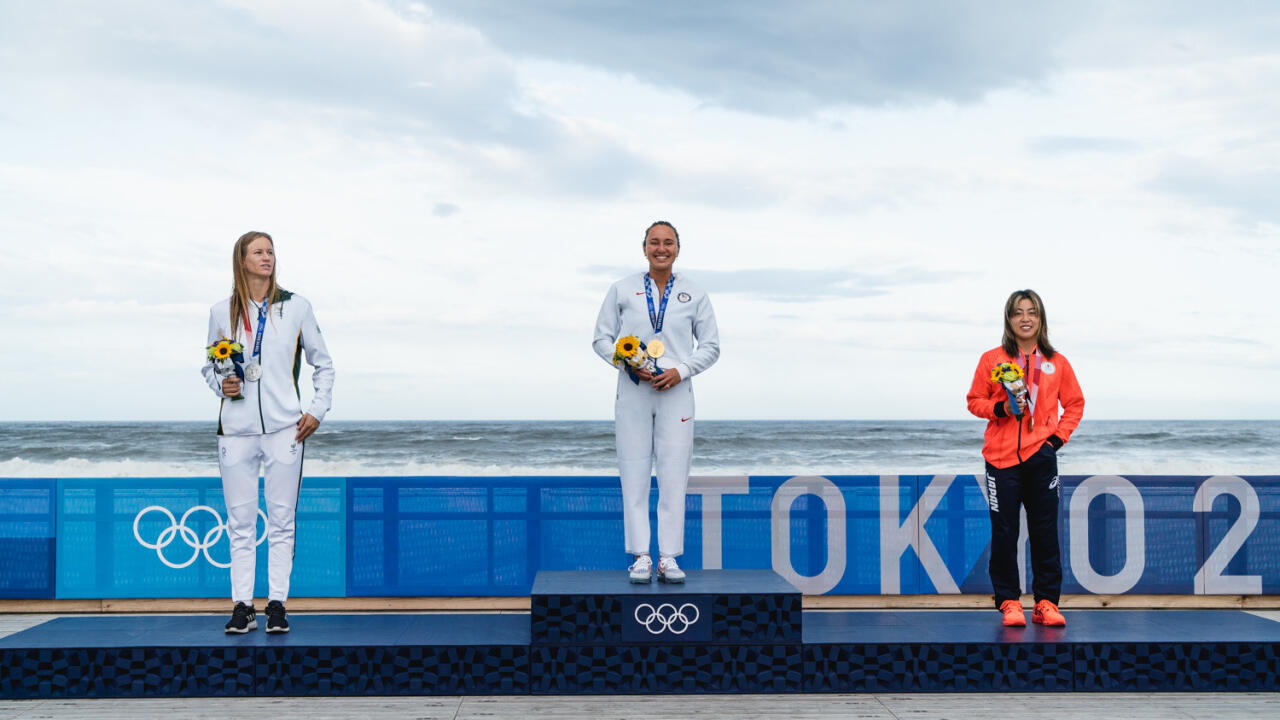 The Men Who Claimed Medals

Owen Wright (AUS) Bronze Medalist, Kanoa Igarashi (JPN) Silver Medalist, and Italo Ferreira (BRA) Gold Medalist. Each of these men represented their country through to finals day and will be remembered as the first men to claim medals for surfing at the Olympic Games. 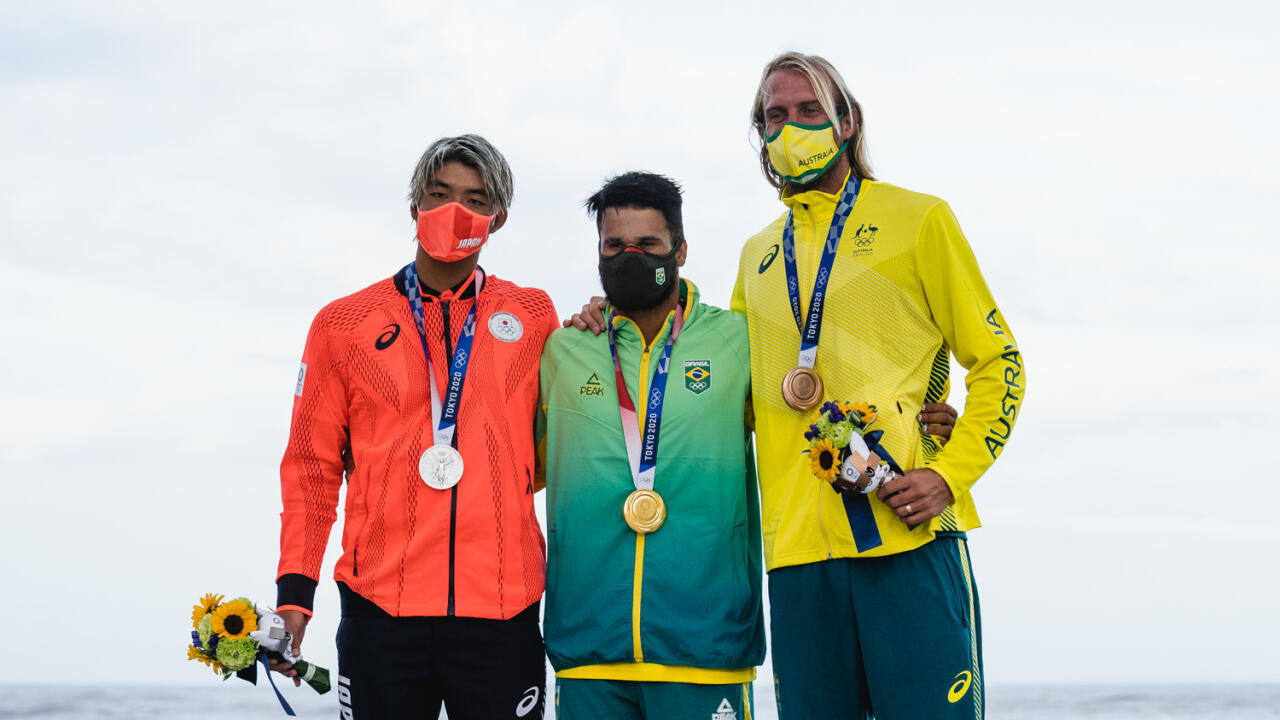