Johnny Cabianca, the shaper for Rip Curl WSL Finals No. 1 seed Gabriel Medina, has gone way above the call of duty to get the potential World Title-winning quiver dialed in.

"Gabriel wanted five extra boards of a new model we are testing for Trestles, but it's a holiday here and I had no glassers or sanders in the factory," Cabianca told the WSL. "So I cut the blanks, shaped the boards, sprayed them, glassed them, put the fins, and sanded them too. It's been hard work, but it's for Gabriel and was such a rare opportunity to do it all 100-percent by hand."

The Brazilian-born, Basque-based shaper had already shipped 10 boards out to Medina for the Finals. The World No. 1 had requested something a little different from their usual Medina and DFK models, with an emphasis on generating more speed between turns. "I came up with a new foil, and adjusted our DFK model," says Cabianca. "We've made the rails lower so it feels more alive under his feet. It also has less rocker, with a deeper double concave between the feet. It was so different we ended making it a new model; we called it ‘The Game.'"

For the board geeks, the dimensions for Gabriel's new Trestles quiver are 5'11" x 19" x 2 7/16 with a volume of 28.5 liters. Cabianca reports that Medina's feedback has been super positive, but such has been his rigorous testing, he's already damaged half of the original quiver. Hence Johnny burning the midnight oil this week to prep the new batch.

For both Cabianca and Medina, the move to the World Title being decided at Trestles is somewhat of a double-edged sword. 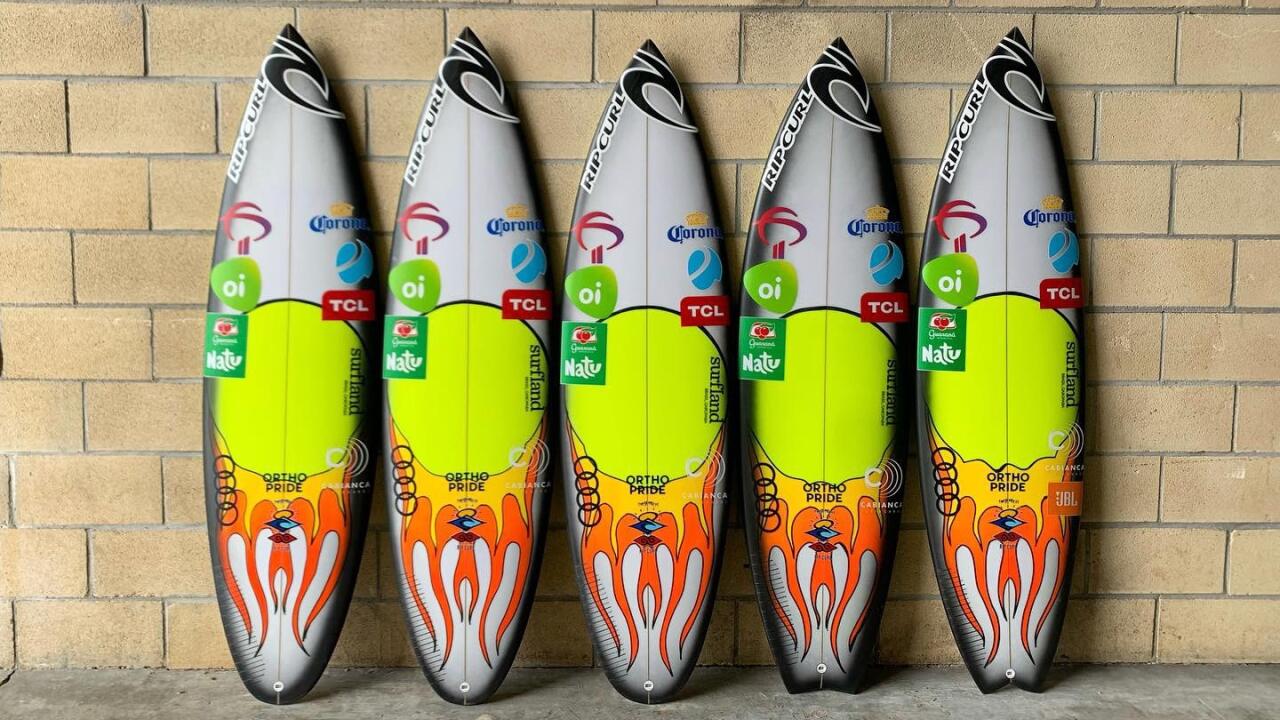 "I think it's a weird situation for Gabriel because he was so far ahead in the ratings, and as the saying goes, one hot day doesn't make a summer," says Cabianca. "However, he knows exactly what he has to do. He's training like a maniac and there's nothing else in his life but the Finals right now. It's absolute, total commitment."

On the flip side, unlike Medina's World Titles won at Pipe in 2014 and 2018, where he often rode Wade Tokoro's boards, this time it will be a Cabianca that Medina will be riding if he clinches the title.

"Taking an entirely selfish view, it was a little hard seeing another board in the all of Gabriel's World Title images when he had ridden my boards in 10 of the other 11 CT events," Cabianca said. "Obviously, it's not about me, but all about helping Gabe to achieve his dreams. Fingers crossed he does that on one of my boards at Trestles."