A marathon day at the WRV Outer Banks Pro pres. by Pacifico QS 1,000 witnessed men's top seeds make their debuts in phenomenal fashion along with more powerful performances from the women to determine their respective Quarterfinalists. Continued two-foot, choppy windswell helped provide scoring potential for some of the region's best ahead of a potential finals day.

The men's top seeds put on a spectacle in the mediocre conditions led by Ventura, California's, Eithan Osborne (pictured above) with an incredible display of both rail surfing and an aerial assault. The 21-year-old heads into Round 5 looking to clinch his first QS Quarterfinal appearance since winning the Seat Pro Netayna in 2019.

"It felt good to through that first slow heat then I pearled on my first wave and thought here we go," laughed Osborne. "But, I got that good reform left and then the right gave me an air section before bowling up on the inside for two good turns. It was nice to have a heat where I could relax a bit in the last eight minutes instead of scrambling. It'd be sick to make another Quarterfinals so hopefully we get some more push tomorrow." Taj Lindblad (USA) finishing off his last attempt to secure the score he needed for a big heat win. - WSL / Elizabeth Fowler

Barbados' threat Josh Burke posted a stunning 15.50 heat total in his Round 3 debut before a Round 4 superheat including rising San Clemente, California, stars Crosby Colapinto, Cole Houshmand, and Taj Lindblad. But, the youngest of the heat, Lindblad, stole the lead in the dying seconds for a massive heat win. The 18-year-old started 2020 at No. 1 on the North America QS rankings and is looking to get back there with a win to start this season.

"I wasn't really nervous I was just waiting for a wave to come to me," said Lindblad. "That one just kept giving and giving, and I almost didn't make the inside which made the difference. It was crazy having the boys from San Clemente in that heat and I know how hard they rip so it was going to take my best. I'm down here with my friend Jeremy (Carter), my dad and my sister so I'm stoked."

"I knew I was the lone ranger in that one with all those guys and I was happy to get that 8.25 at the start," said Burke. "My intentions are always to win, you don't spend the money to try and get here without getting a win, so that's the goal - get some points and also some money for travels later into the year. Can't thank SeaRanch Resort enough for all their support this week." Michael Dunphy (USA) has spent some time away from the Outer Banks and came back in a flurry. - WSL / Elizabeth Fowler

2014 WRV Outer Banks Pro pres. by Pacifico victor Michael Dunphy returns for the first time since 2018 and did so in terrific fashion with two heat wins. The 31-year-old got his first glimpse at the Championship Tour (CT) for the Jeep Surf Ranch Pro pres. by Adobe but this marks his first event back since 2020 after sustaining an injury before the Jack's Surfboards Pro in August.

"I'm just really happy to be surfing a heat again to be honest," expressed Dunphy. "I haven't surfed a meaningful event in the ocean since Manly over a year and a half ago. There was the WSL Surf Ranch event but that was more of an experience than anything and I felt super nervous out there today. I won this event and was on a good roll that year, but I'm not putting any pressure on myself to win this event and just enjoy it." 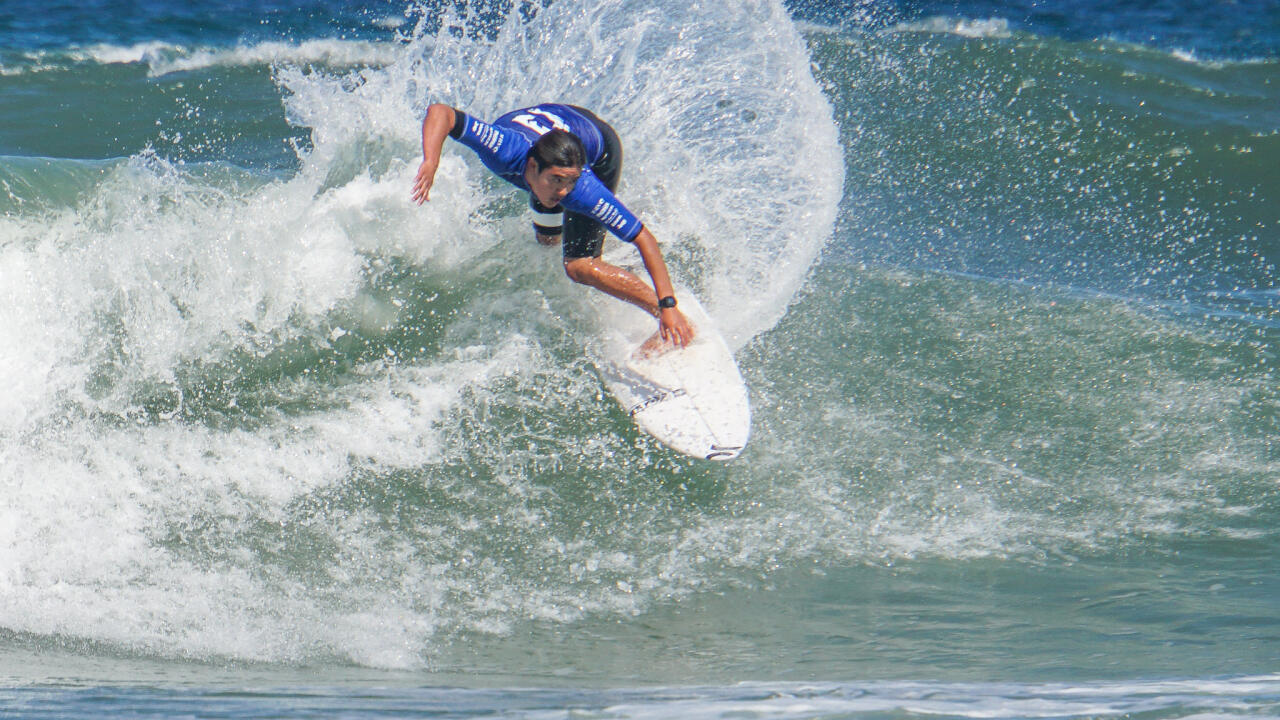 Taro Watanabe's 8.25 matched that of Burke and Osborne and a 14.35 heat total that fell just shy of Dunphy in Round 4. - WSL / Elizabeth Fowler

Big wins from the likes of Davi Toledo, Blayr Barton, Taro Watanabe, Kade Matson, and Nolan Rapoza raised the level of competition as they await crucial matchups on Saturday. Kirra Pinkerton (USA) all smiles after a dominant Round 3 performance. - WSL / Elizabeth Fowler

Kirra Pinkerton comes into the Outer Banks as one of surfing's most notable women on the rise and continues to show it in every new heat. The San Clemente, California, 2018 World Junior Champion left nothing to chance in her Round 3 bout to garner an incredible 15.75 heat total and now looks for her second QS victory heading into a seventh-career Quarterfinal appearance.

"It felt super good to get some good scores and gain some confidence going into the quarterfinals," exclaimed Pinkerton. "I'm loving this place and can't wait to see what the waves change into tomorrow. Getting back into the jersey was the highlight of this year. Getting my adrenaline running and getting back into a contest mindset is something I couldn't wait any longer for. Can't wait for the rest of the year." 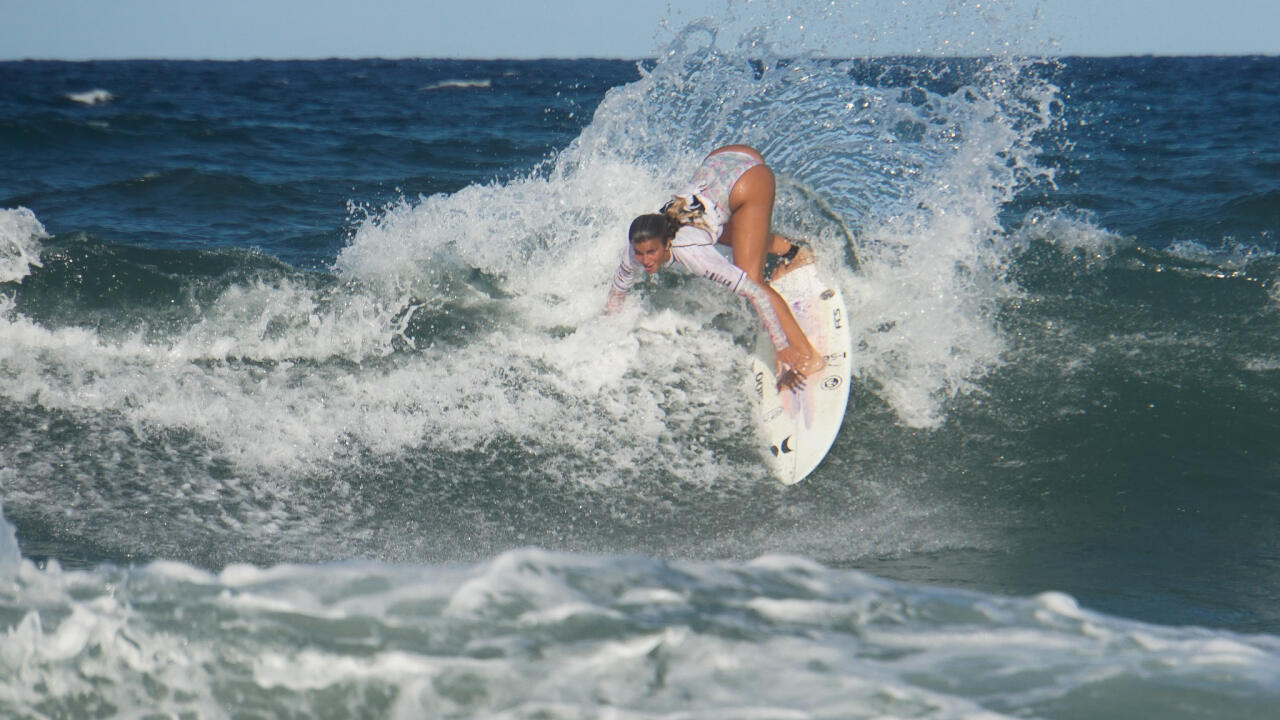 Round 2 standout and defending event victor Zoe Benedetto didn't wait until the final seconds today to secure her passage into the next heat after a buzzer-beater Thursday and had control of her heat for most of the battle. The Palm Beach, Florida, competitor continued to rely on her forehand attack to overcome North America standout Alyssa Spencer, also advancing, Kayla Coscino, and Faviola Alcala.

"When I'm in a heat I want to win it even though second is still advancing at this point and I never expect anything and today I did a lot better," said Benedetto. "I just want to keep my cool and focus on myself. Everyone here is so good so you can't focus on what they do and just learning from every new heat." A 7:30am EDT call will determine a possible 8:00am EDT start for either men's Round 5 or women's Quarterfinals.