With the Atlantic delivering a steady run of swell, after a challenging week of surf, Hawaii's Ezekiel Lau and Luana Silva have taken out the MEO Vissla Pro Ericeira. The second stop of the 2021 Challenger Series, the event wrapped up in clean three to-five foot surf at the iconic righthand point of Ribeira d'Ilhas. Luana Silva

For Lau, who's also coming off of a big win on ABC's "The Ultimate Surfer," the victory puts him atop the Challenger Series ratings and well within striking distance of qualifying for the 2022 Championship Tour.

And for Silva, as well as fellow finalist Gabriela Bryan, the result also offers a good opportunity to add a couple more surfers from Hawaii to the CT next year.

Here's how it all went down:

Lau came into Portugal extremely focused and barely blinked all week long as he hammered his way to the top of the podium at Ribeira. On Finals day he had to get through a very in-form Nat Young. The two have been competing against each other since their amateur days in the U.S., and after falling off the CT, both appear extremely intent on rejoining the big leagues.

Lau handled Young in a high-scoring affair to set up a Final with Aussie upstart Jackson Baker, who win or lose, just posted the best result of his young career. Lau got to work early, posted a pair of 8-point rides and never really looked back.

"Falling off Tour a couple of years ago I've been working so hard ever since to just get back and winning here feels amazing," Lau said. "I knew this was going to be a good event for me, so I focused in on it. I trained long and hard for it, so I'm just really stoked and just want to thank everyone that has helped me get to this point."

Coming off a decent start at the US Open with a 9th place finish, Lau clearly stepped up his game this week, consistently posting some of the biggest scores of the event. For the effort, Lau jumps from 34th to 1st on the Challenger Series rankings and is in a very strong position heading into the back half of the season.

Finals Day Post Show: Lau, Silva Win In Portugal As Hawaii Sweeps Second Challenger Series Stop
26:05
Lau on a mission to qualify for 2022 CT, while next generation of Hawaiian women have arrived.

Merewether's Baker was nowhere to be seen on the rankings after a poor first event in California, but the powerful regular-foot found his groove on the Portuguese waves and posted his career-best performance so far. Spirits lifted by the whole Aussie posse, Baker's exuberant turns and claims fired up the crowds all the way into the Final.

"When I first came in I was definitely a bit upset but overall I'm over the moon with this whole event," Baker said. "It'll slowly start sinking in and I'll look at all the positives!"

Baker jumped from 65th on the Challenger Series rankings all the way up to 7th and is now a legitimate bet in the qualifying conversation. Ezekiel Lau has put in the work to get himself back on the Championship Tour next season, and after a win in Portugal he's well positioned to do just that. - WSL / Damien Poullenot

The women's Final brought incredible fireworks right from the get-go with Gabriela Bryan and Luana Silva scoring great waves and tearing them apart with the power and progression they have been displaying all week.

Ten minutes in they were both sitting on incredible heat totals, 17.13 for Bryan, 16.13 for Silva. For the next 20 minutes, Silva, with a near-perfect 9.80 on the board, struggled to find any opportunity in the lineup.

But with time ticking away and only 15 seconds on the clock, a wave finally materialized and the young surfer went to town. Showing no sign of pressure whatsoever, Silva dug deep for an excellent 8.23 to seal the biggest victory of her young career. The result rockets her up to third on the CS rankings. 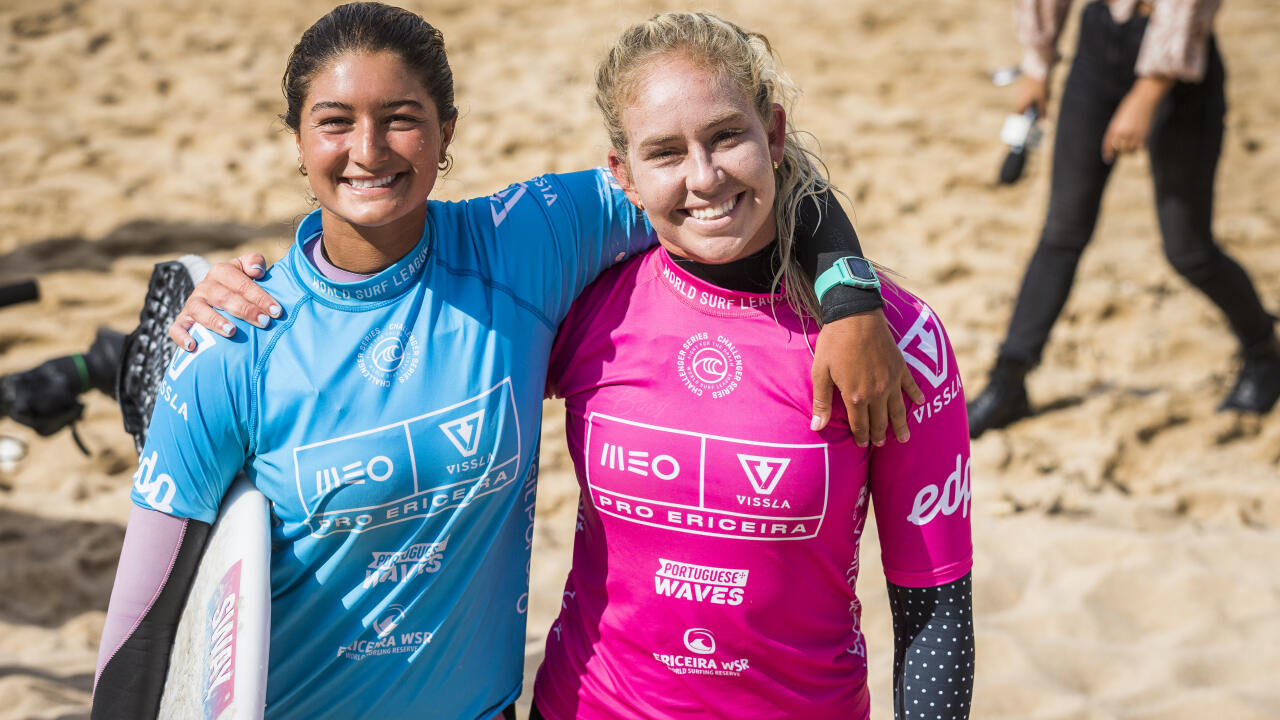 For the women of Hawaii, the future is now as Bryan and Silva have surprised the world this season on the Challenger Series. - WSL / Damien Poullenot

"I have no words right now I'm so happy," an ecstatic Silva said with tears in her eyes. "I knew it was going to be tough that Final against Gabriela, but I just waited and finally got my chance. I'm stoked I managed to showcase my surfing."

Gabriela Bryan cemented her massive lead on the Challenger Series with a second, back-to-back runner-up finish after the US Open. The powerful regular-footer was 15 seconds away from clinching that first major win and though the final result must be hurting right now, her incredible rampage through all the rounds this week will be a massive confidence boost, proving her surfing belongs at the very highest level in all types of conditions.

"I surfed the best I could and I'm really happy with this," Bryan said. "That last wave came to her and there's nothing I could have done unfortunately. I'm going to give myself a chance in France now and I'm really proud of myself for being consistent." Semifinals Results and Other Notable Competitors

In the opening men's Semifinal, a clash between overall standouts this week proved extra entertaining as Lau and Nat Young went blow for blow. Eventually though, the Californian came up short despite a solid 15.67 heat total, and placed equal 3rd. A big result for Young that will propel him 14 spots on the rankings into 4th position midway through the season.

An unfamiliar sight in Semifinal 2 of the men's was Imaikalani deVault's off rhythm. The Hawaiian who previously posted the event's biggest scores just did not catch the right waves and couldn't perform his usual progressive and aggressive maneuvers. However another big result for the Maui local will see him move into 3rd position on the rankings with a strong chance of backing it up in the remaining two events.

The women's Semis were a little more obvious in that two of the most dominant surfers all week just kept their composure and the two underdogs Pauline Ado and Ariane Ochoa struggled to find the same excellent rhythm that carried them all the way into a 3rd place finish.

Nonetheless, the two best Europeans in the event capitalized big time on surfing in familiar territory moving up to 4th and equal 5th respectively with one more stop on home soil coming up next week. The Challenger Series leaders after the US Open mostly didn't fare well in Portugal and that opened the door to many lower ranked athletes to swoop in and move into virtual qualifying zone. See the new rankings' Men's Top 12 and Women's Top 6:

The next event on the 2021 Challenger Series will be the Quiksilver and ROXY Pro France, held at ‘Les Culs Nus' beach from October 16-24, 2021, watch it LIVE at WorldSurfLeague.com.

American, Hawaiian surfers lead the charge as the Atlantic served up the MEO Vissla Pro Ericeira's best day of waves so far.