The women's Final unraveled between Hawaii's event standouts Culhane and Haley Otto with Otto holding a solid, 10.00 (out of a possible 20) heat total in the first ten minutes as Culhane looked to earn a 6.50 (out of a possible 10) to get back into the affair. Culhane's answer fell just shy, accruing a 6.35 before backing it up with a 6.50 to take the lead. Then, she continued that form to post an excellent 8.50 with impeccable footwork at the ten-minute mark and force Otto into requiring an 8.10 as time dwindled.

"It feels so good and I'm just stoked," said Culhane. "It's pretty special to surf with (Haley Otto) at home then surf with her in a heat here. There's always that rivalry, but when you get back on land we're all friends." This marks Culhane's first-ever WSL victory after a marathon Finals Day ended in glory for the Oahu, Hawaii competitor. Culhane had to overcome multiple event threats, starting with a Round of 16 win, including an in-form, former WSL Longboard Champion, Rachael Tilly (USA), in the Semifinals, after earning runner-up to her in their Round of 8 affair. Now Culhane sets her eyes on Malibu for a chance at her maiden World Title. Sallas put on a world-class showcase from his first heat until claiming a massive win ahead of his Malibu finale. - WSL / RunAmuck Russell

A quick start in the men's Final went to Sallas to earn an impressive 6.25 and backed it up with a 5.75 to take control and leave an in-form Richie Cravey needing a 7-point ride at the halfway mark. Sallas showed his experienced and utilized his priority brilliantly at the 7-minute mark to post a 7.50 with impressive footwork to closing the wave out, increasing Cravey's requirement to an excellent 8.95 for the win. When the horn sounded, it was Sallas who emerged victorious riding his own craft and now sits atop the Hawaii/Tahiti Nui rankings.

"The waves actually ended up being really fun," said Sallas. "If you don't compete for awhile you get those jitters so this was a good warm up heading into Malibu. I know Richie (Cravey) is a really good surfer and I've never competed against him, but I know he's one of those underground, really good guys. I feel like my boards are working better than ever and I hope I can surf well in Malibu."

WSL Longboard Tour veteran Sallas showcased his experience and style throughout the event, winning each heat he stepped into from his Round of 32 debut until claiming the victory. A clutch win in the Semifinals over Troy Mothershead nearly saw the Hawaiian pushed out of competition, but Mothershead last attempt didn't meet his requirement. Now, Sallas' focus turns to a big World Title showdown. 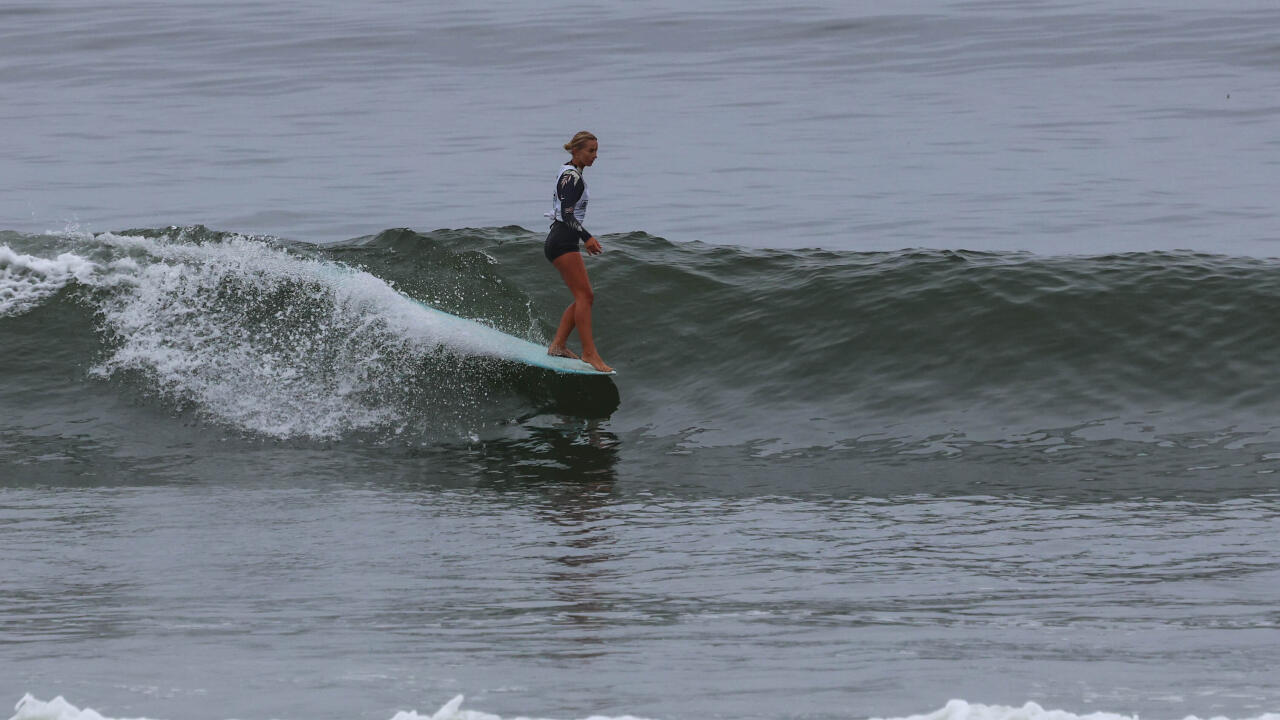 Otto's impressive showing guided her to a runner-up and within striking distance of the 2023 WSL Longboard Tour. - WSL / RunAmuck Russell

A brilliant run through Finals Day for Otto garnered a career-best WSL result and put herself into a great position toward qualifying for the 2023 WSL Longboard Tour. The Wakiki, Oahu surfer took control of each of her heats, earning wins in each of her Round of 16, Round of 8, and head-to-head Semifinal bout with Dominique Miller. Now, the former WSL Longboard Tour competitor awaits another opportunity to secure her place among the world's best once more.

"It feels really good to make a Final," said Otto. "I took a bit of a break from competitive surfing, but it's great to be back and I'm super stoked to surf well. I'm proud of myself and know I gave my best. Now I'll just keep practicing and hope I can get a better result at the next one." A dream WSL debut for Cravey finished with a runner-up and now leads the North America rankings. - WSL / RunAmuck Russell

Cravey's road to the Final was no easy task, having to take on current World No. 1 Kaniela Stewart in both his Round of 8, trading off excellent waves with one of the world's best, and Semifinal affairs after a convincing Round of 16 win. The 34-year-old's dream run may have ended with a runner-up, but now sits atop the North America rankings and is in contention to join the world's best in 2023.

"It's been years that I've wanted to surf these events and I have kids so that's been the focus," said Cravey. "But, my friend Kaitlin (Mikkelsen) mentioned this event to me and so I got fired up for it. I stepped away from competitive surfing for awhile and then the return to traditional longboarding came back around. I'm happy I came back." An incredible showing from 2015 WSL Longboard Champion Tilly ended in a back-and-forth battle with eventual winner Culhane. The two traded off on some of the day's best waves, Tilly posting a day's best of 8.75, and the heat came down to the final seconds with Culhane needing an 8.46 before earning an excellent 8.60 to steal a win. Tilly now sets her eyes on a second World Title run at the Cuervo Classic Malibu Longboard Championship pres. by O'Neil.

Stewart's impeccable debut still held firm as the event's best performance before being dismantled by eventual runner-up Cravey in their second Finals Day bout at Pismo Beach. But, the current World No. 1 will have everything to surf toward a maiden World Title for next week in Malibu.

A stout Semifinal clash between eventual runner-up Otto and Miller witnessed Otto stay poised despite Miller's impressive form. Miller bettered her career-best QS result with a Semifinal appearance after making her way through the Round of 16 and Round of 8 in clutch form to advance from both.

Rounding out Semifinalist standouts, long-time longboard and former WSL Longboard Tour competitor Mothershead showed why he was once a threat among the world's best. Turning in multiple 13-point, plus heat totals throughout the event as he is now poised for a chance at rejoining the WSL Longboard Tour.