Finals Day is locked in at the World Surf League (WSL) Sunset Pro presented by HIC, a regional Qualifying Series (QS) 1000 event, as top-seeded men and women took control in continued two-to-three foot swell. The men's Round of 64 finished in its entirety with brilliant showcases before the women debuted in dominant form to power through the Round of 20 and Quarterfinals with a few big upsets. 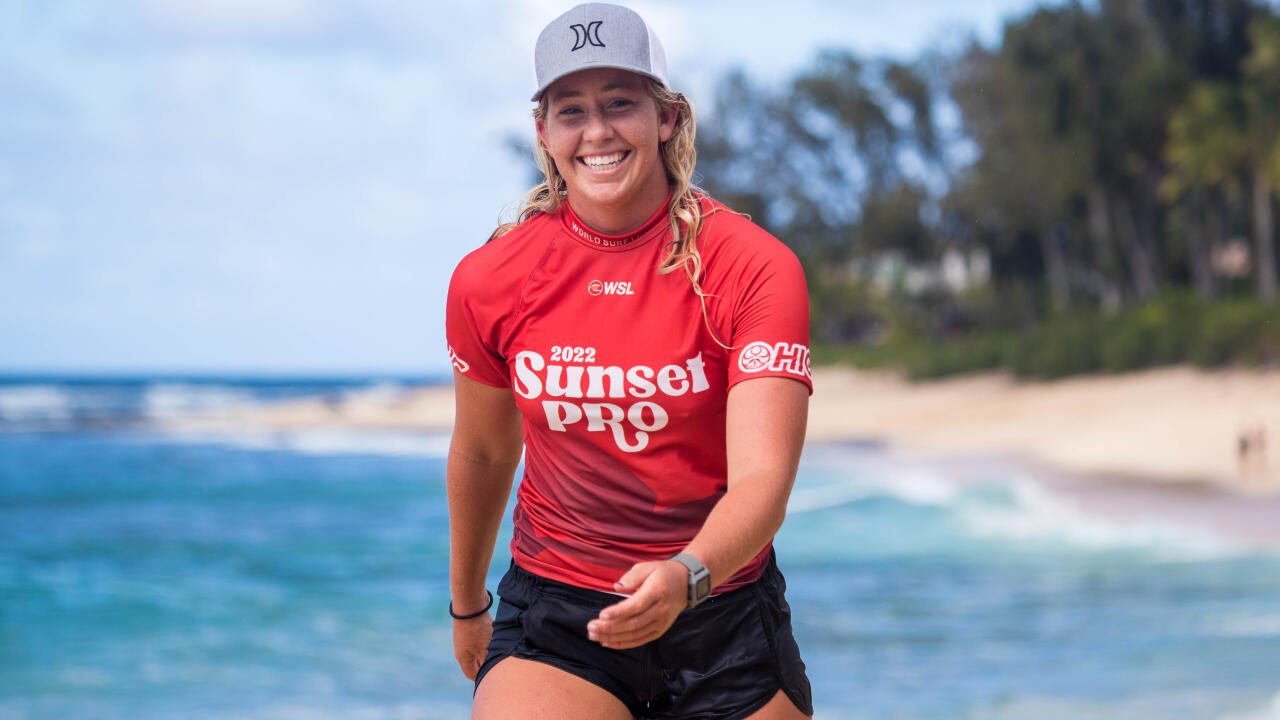 Bryan all smiles after a decimating debut in the water. - WSL / Tony Heff

Kauai, Hawaii's Gabriela Bryan made her dreams of qualifying for the elite Championship Tour (CT) a reality in 2021 and earned the 2022 Rookie of the Year. The former Sunset Pro Junior victor brought that confidence to the QS and debuted in phenomenal fashion with an excellent 16.50 (out of a possible 20) heat total and Maluhia Kinimaka advancing behind her. The 20-year-old is capitalizing on an early chance to get reps in Sunset Beach despite the small conditions, and knows the importance of time in a jersey.

"This last year on the CT did so much for confidence with the level being so high, and I think I've gotten some amazing experience," said Bryan. "It's super important doing this contest for jersey time. There's a pretty big break until the CT starts back up so it's good to stay in heats and it's tough competition. These young girls are really good." 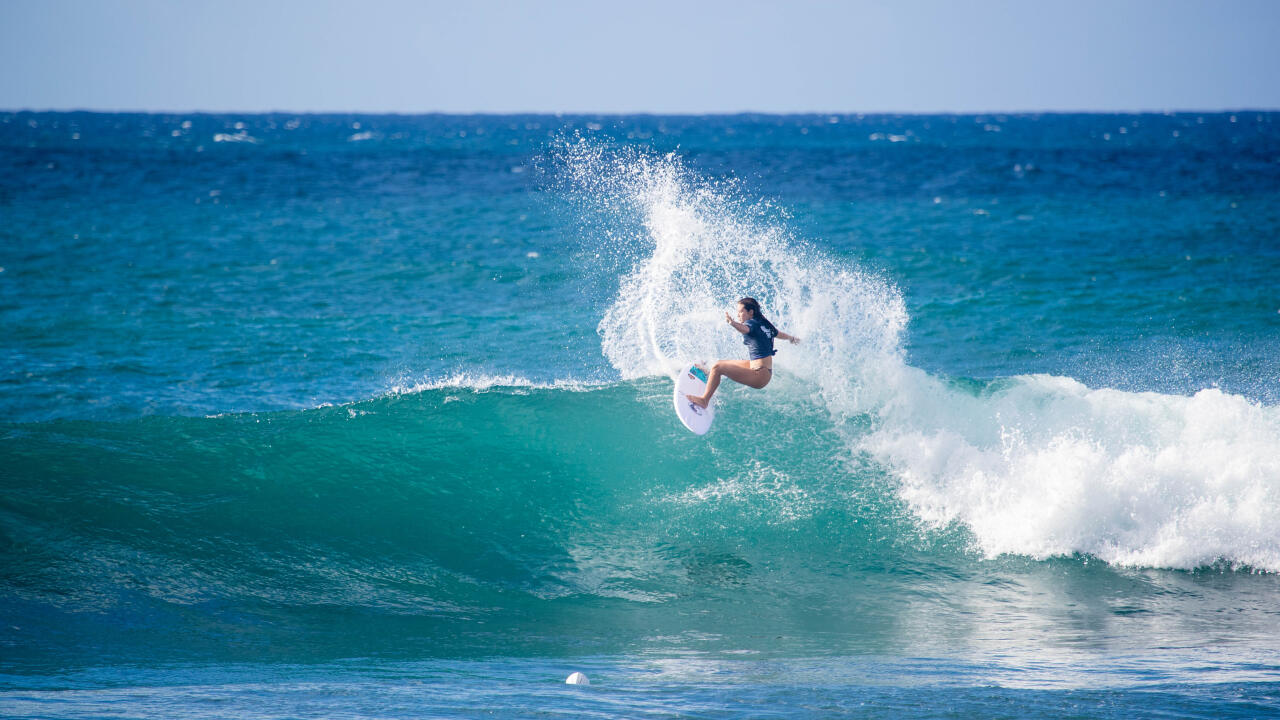 A powerful debut by Eweleiula Wong (HAW) led to the upset of the event so far. - WSL / Tony Heff

For the Hawaii/Tahiti Nui Pro Juniors, competitors 20-and-under, such as Wong and Kinimaka, this event is another crucial stepping stone in their season as it earns them points toward WSL World Junior Championships. Erin Brooks, Malia Lima, and Nora Liotta are all in the hunt with their Finals Day appearances.

"It would be awesome to get into the World Juniors and also the Challenger Series," said Wong. "I would love to make it to the World Tour eventually. I'm super excited to be back into Finals Day and hopefully get some fun waves." 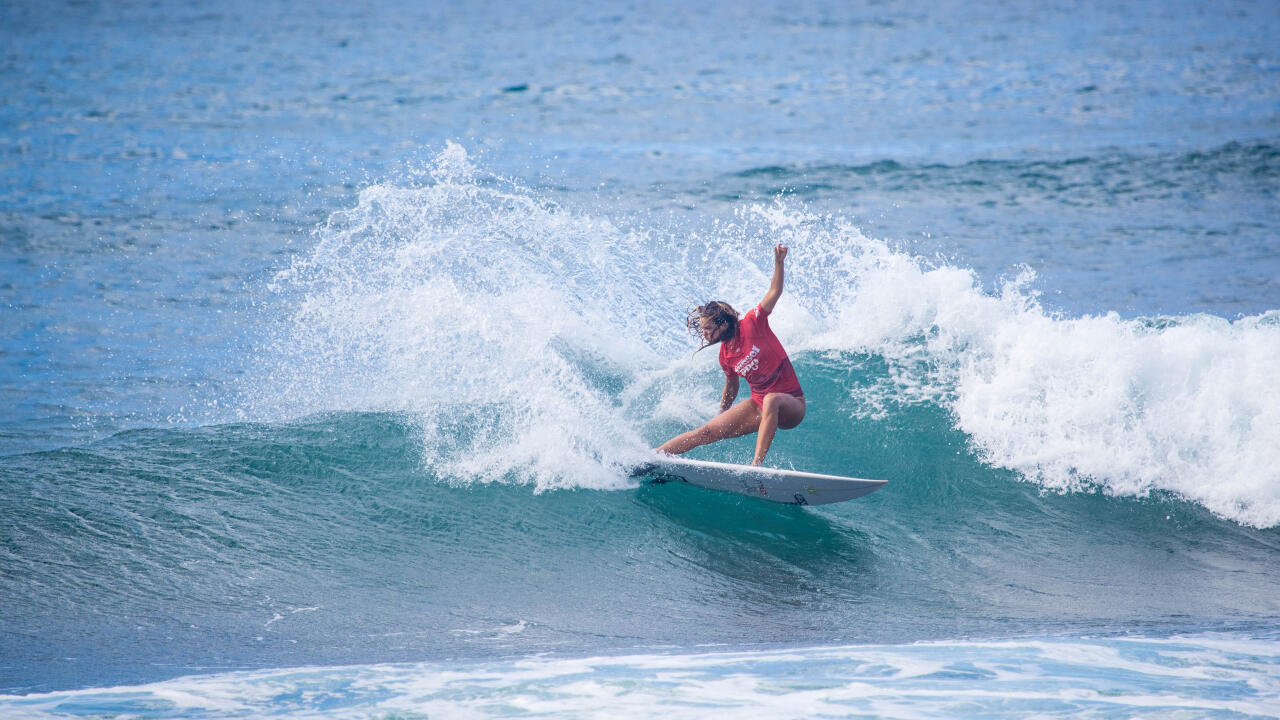 Also, a vital Quarterfinal win for Brianna Cope earned her way into the Semifinals with a brilliant 14.40 heat total after a crushing, Quarterfinal loss to start her QS season, and Lima handled her Quarterfinal Heat 3 battle in clutch fashion - also earning a big upset over current No. 2 Puamakamae Desoto. 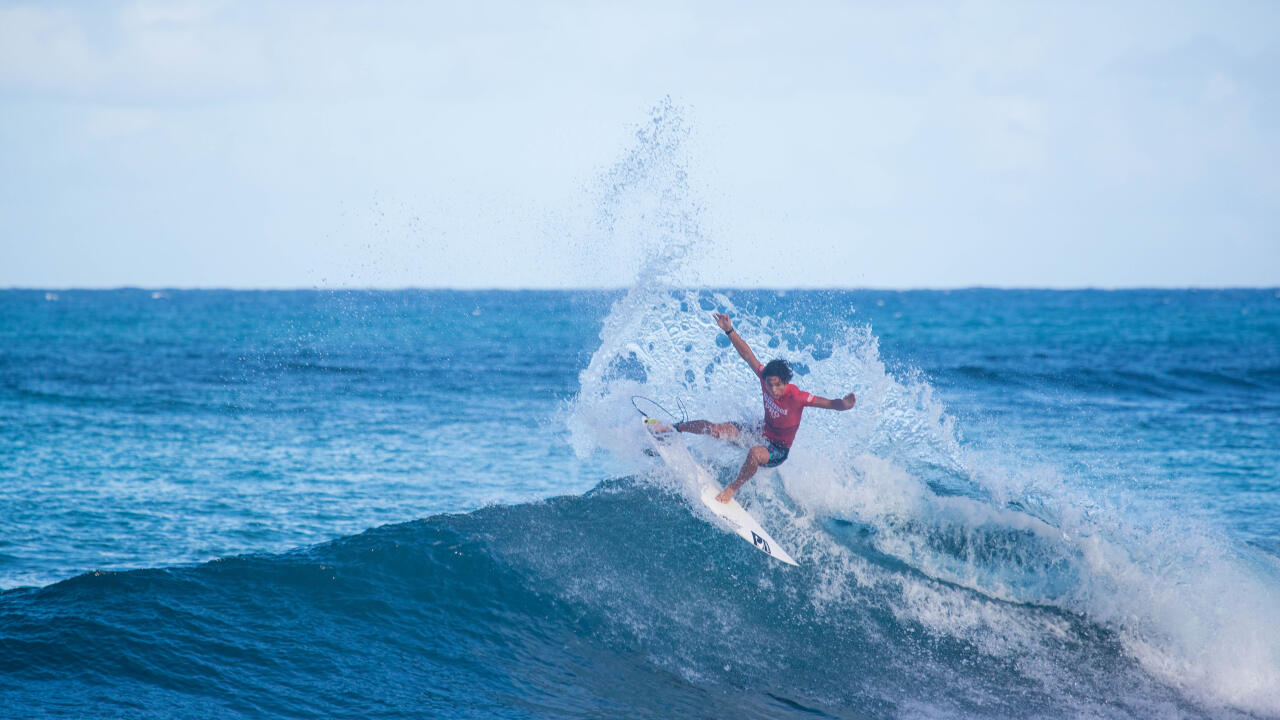 Haleiwa's Shion Crawford (HAW) came out firing on all cylinders once more in the jersey. - WSL / Tony Heff

Rising talent Shion Crawford brought out some of his best forehand attacks to earn a brilliant 14.50 heat total, including an excellent 8.00. The Haleiwa born-and-raised competitor made a statement at the Priority Destinations Pro presented by Mastercard to kickstart his 2022/23 season, but fell short of a major result and now looks to build on his early success.

"It feels good to compete at home, we only have two contests so far so you have to make use of them," said Crawford. "A good start is what you want, you start off strong and that builds some confidence. You just have to get a second score and you're stoked. I just try to surf with no pressure so that you just surf freely and have fun out there." 2022 Championship Tour (CT) standout, starting from a wildcard and earning a full-time place into the 2023 season, Barron Mamiya made his time in the jersey count with an impressive debut heat win.

"I'm stoked to be home and it's kind of the off-season for me, but I'm excited to do another competition," said Mamiya. "It's amazing to be back at Sunset. I haven't surfed out here since the last contest and I'm stoked to be having fun. It's sick to be on Tour finally and go to all the spots. I've been preparing for next year, training a lot, and I'm fired up to finish strong here tomorrow. Jackson Bunch (HAW) currently sits at No. 2 on the Hawaii/Tahiti Nui rankings and currently holds a place in to the WSL World Junior Championship. - WSL / Tony Heff

Current Hawaii/Tahiti No. 3 Joshua Moniz started the day off with a clutch victory, but his fellow rankings leaders, No. 1 Eli Hanneman, No. 2 Jackson Bunch, and No. 4 Kai Martin all earned respective wins of their own. An all-important Finals Day awaits to see who makes a charge closer to Challenger Series qualification, as well as the highest-ranked Pro Juniors, ages 20-and-under, to determine World Junior Championship qualifiers.

Bunch's impressive backhand attack earned the Maui competitor a 13.65 heat total to secure his place into Finals Day and moves one step closer to securing his place into the World Junior Championships.

"You just have to be on the best waves and right now it's not normal Sunset where there's a golden egg in every heat," said Bunch. "It's a lot of the same waves and the best surfer wins. It's always nice to win that first heat and I'm excited for Finals Day, hopefully the waves are fun, but I had a blast out there."

The event is also supported by the Hawaii Youth Surfing Development Organization (HYSDO), a local nonprofit working to support Hawaii's next generation through career and competitive development, in and out of the water.

The Sunset Pro presented by HIC will run on the best three days of the event window beginning October 28 - November 6.

The World Surf League (WSL) Sunset Pro presented by HIC, a regional Qualifying Series (QS) 1000, got competition underway as two-to-three foot swell began pulsing through Vals Reef of Sunset Beach. Despite small conditions, competitors rose to the occasion and overpowered the waves with commanding performances in their Round of 96 and Round of 64 debuts. With the Round of 96 and Round of 64, Heats 1 - 4, contested in their entirety, remaining top-seeded competitors await their debuts. Unfazed by the smaller conditions, Kylen Yamakawa unleashed a day's best performance on his backhand to earn a 14.90 (out of a possible 20) heat total and excellent 8.50 (out of a possible 10). The Honolulu, Oahu competitor was a standout at the first event of the 2022/23 season, the Priority Destinations Pro presented by Mastercard at Ala Moana Bowls, in his hometown and brought that confidence to the North Shore. The 30-year-old kept his approach light-hearted and it seemed to be a winning formula once again.

"The strategy was basically just like surfing a mock heat in the water at our local spot at Kewalos," said Yamakawa. "So that was the strategy, to just have fun. I told my wife since Ala Moana Bowls went so well and if I can somehow squeak out a result here and qualify for the Challenger Series, then we'll choose an event or two and make it a family vacation. For us it's just have fun and if we can get a little travel in, that's the goal." Levi Young (HAW) showcased his lethal forehand to earn excellence all his own. - WSL / Tony Heff

Maui, Hawaii's Levi Young also put on a clinic in his Round of 96 debut, accruing an remarkable 14.65 and 8.25 of his own with a dominant forehand attack. The now 18-year-old witnessed his older brother, Cody, win this event in 2019 and that helped spark ambitions of his own.

"I'm stoked to surf Sunset again, I love this wave," said Young. "It felt great to get going, I haven't started a heat like that in awhile and getting my points up early feels good. Seeing my brother (Cody) win this was so sick and I want to do it one day. I'm stoked to be in this event and give it a go." Young's fellow Maui, rising talent Kai Paula found his footing in a brilliant debut to earn an excellent 8.00 and move into the top-seeded Round of 64. Paula earned an equal 33rd at this event the last time it ran in 2020 and will be looking to better that after a tough start to his 2022/23 QS season at the Priority Destinations Pro presented by Mastercard.

"It felt really good to put a jersey on again and get right into a good rhythm," said Paula. "I love coming to the North Shore to compete and I'm excited to make it happen, and get a result. This year I've been working on some filming and I also want to get on the Challenger Series." The Hawaii/Tahiti Nui region is stacked with teenage talent and Jackson Dorian added his name to that list in his WSL debut. Noted as one to watch as he grew under the influence of his father, former Championship Tour (CT) competitor and surfing icon Shane Dorian, the 15-year-old utilized his dynamic forehand to win both his Round of 96 and 64 heats. Both Dorian and Isaiah Moniz eliminated top-seeded surfers Koa Smith and Eala Stewart to mark the first notable upset of competition.

"It was good (to win both those heats), I was super nervous after a scary start in the last heat but got two good ones in the end," said Dorian. "This kind of feels like Big Island right now, it's smaller and fun little rights which is my favorite. I have the size advantage and it feels like home so I'm comfortable." Also, putting on an impressive showcase with a big heat win, Philippe Chagas garnered a 13.15 heat total as Kala Willard, Alex Smith, Makai McNamara, Jae Wood, Gregg Nakamura, Kainaru Kato, and Liam Wilson all made their way into the Round of 64.

The 2022 Championship Tour Rookie of the Year brought her best to Sunset Beach and proved she's ready for what awaits in 2023.

All the best waves from Gabriela Bryan and Samuel Pupo and see how they took 2022 Rookie Of The Year honors.

The 17-year-old earned a No. 2 finish for the Hawaii/Tahiti season and now prepares for the 2023 Challenger Series.