Day 2 of the 4-Star Surf Open Acapulco was jam-packed with 24 heats of surfing, completing Round 3 and progressing halfway through Round 4. The welcoming beachbreak of Playa Revolcadero greeted competitors with a slight drop in size and light winds, offering clean three-to-five foot conditions with long, workable rides all the way to the shore.

The performance of the day went to Mitchell James of Australia in Heat 5 of Round 4 as he managed to rack up a 15.53 heat total, the highest two-wave score of the event so far. The regular-footer showed his true form on a few rights and connected a couple of solid hacks. His powerful yet stylish forehand attack earned him a heat win and a spot in Round 5.

â€œIt was a bit tricky,â€ James explained, â€œbut I just waited for the second wave of the set because it was cleaner, and I tried to go for the bigger ones. I'm looking to just make a few heats because I didn't do to well at the last event (the Los Cabos Open of Surf). This is my first time in Mexico so I'm loving it. The food is good and the water is warm.â€

James has already far surpassed his last result in Los Cabos where he lost in Round 1, and can expect to see a bump in the series ratings where he currently sits at No. 161. 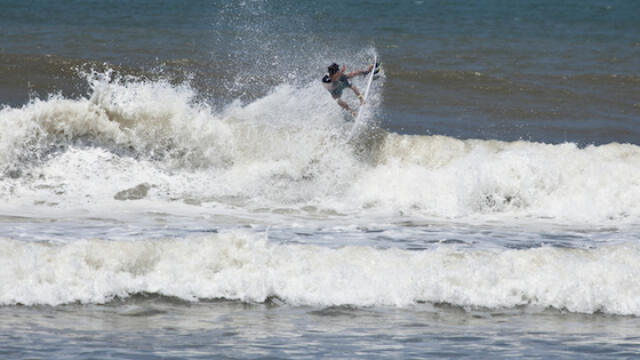 South Carolina's Cam Richards (USA) was a standout in Round 3 of competition. - WSL / Edwin Morales

In Heat 13 of Round 2, the young Noah Schweizer (USA) had a breakout performance placing first and dropping an 8.00 to tie with the highest single-wave score of the event. The Floridian is fairly new to the Qualifying Series (QS), only having done two other events prior to Acapulco. Schweizer is looking to build up some rating points at this event and his approach seems to be working so far.

â€œIt was actually really fun out there,â€ said Schweizer. â€œIt was a little mushy but you could fit in a bunch of turns, a lot of leg-burners. This is my first year at this event in Acapulco and only my third ever QS event. I'm having fun though and I guess the waves are supposed to get a little smaller tomorrow and I'm a smaller guy so hopefully I'll do well.â€

Another worthy showing came from Noe Mar McGonagle of Costa Rica when he clawed his way through his Round 4 heat dropping a 7.03 in the dying seconds to put himself in advancing position. The regular-footer utilized his strong and precise backhand and went to town on a long lefthander before laying the finishing crack just feet from the sand.

â€œTowards the end I knew I needed a score and I was debating where to sit out there,â€ McGonagle said. â€œLuckily I stuck to the right peak and I am just stoked to have gotten that one at the end and make it through so I can get a chance to better my result from last year (equal ninth).â€

The Surf Open Acapulco is scheduled to run from July 8-12 and webcast LIVE on http://www.surfopenacapulco.com/.

Quarterfinalists are decided as the swath of surfers competing in Playa Revolcadero's 4-Star Surf Open Acapulco is whittled down.

Action heats up on Day 3 of the ASP 4-Star Surf Open Acapulco.

The 4-Star competition drove through opening rounds as the QS returns to Mexico.