This week in Huntington Beach, CA, the world's best surfers are going head-to-head at the Vans US Open of Surfing. An annual rite of passage, the event allows the women on the World Championship Tour (WCT) to show off their skills in front of massive crowds. As stop No. 6 on the Samsung Galaxy ASP WCT takes a day off, Deputy Commissioner Jessi Miley-Dyer discusses some of the rivalries, the skill sets, and the hometown advantages among the Top 17. 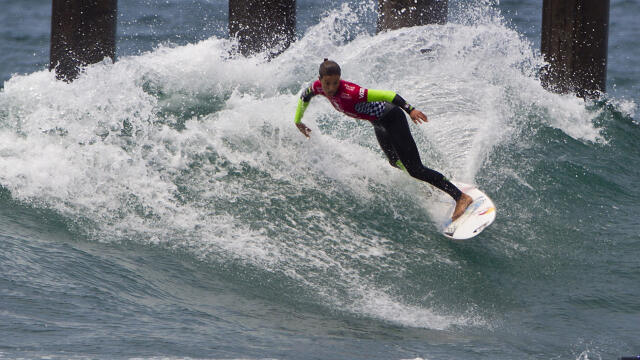 A light-footed Sally Fitzgibbons in the 2014 US Open Round 1. WSL / Rowland

The elite women's Tour has landed this week in Huntington Beach, CA. Who are the standouts in the lineup? Who's expert on these waves?
There are a couple of girls who have done really well in Huntington in the past. Sally Fitzgibbons (AUS) and defending Champ Carissa Moore (HAW) both know the wave really well. Someone like Lakey Peterson (USA) loves this place, and always does really well here, too. She gets excited to surf in front of her home crowd. Malia Manuel (HAW) has also done really well here in the past. When it was a Qualification Series (QS) 6-star, she won. It was probably one of the first QS events she'd done.

Stephanie [Gilmore] (AUS) has won the US Open before, as a QS. But she and Tyler [Wright] (AUS), this isn't their favorite spot on tour. They're real pointbreak surfers. But this is a really important stop for both of them, because they need to do well here to get back in the points race.

What is it about Sally and Carissa's surfing that allows them to succeed at Huntington?
They're both really light-footed which helps, because Huntington can be one of those places where you've got to turn direction on the drop of a dime. Someone like Carissa has grown up surfing a lot of events there, as well. And they both love the wave, which is important. By light-footed, do you mean that they're agile, and able to make the most out of smaller waves?
Not exactly. Sofia Mulanovich (PER) used to do this little pre-heat exercise where, whenever the surf was small she'd walk around on the tips of her feet, so you're not pounding. This is not technical, but sometimes when you're flat-footed on your board, and you're heavy on your feet, it can make the board a little bit sluggish.

The US Open is a popular event among fans. How do the pros see it, and what does it mean for them?
When we got to this event in the past we didn't have Trestles on the Tour schedule. This was the hometown event for a lot of the women, particularly when we didn't have Hawaii either. So you have a lot of the Hawaiian girls that spend a lot of time in California, and then you have people like Lakey and Courtney Conlogue, who's out with an injury, and for them, this is their big hometown event that they get to bring their family to, whereas the Australians have three events, and we've got months at the beginning of the year where they have that support.

They can bring their friends to the beach, they can be close to home, they can be eating their typical meals. Just being able to go to the supermarket and being able to buy the same brand that you're used to buying is a big thing as well. So for a lot of the women this is their chance to do well in front of their family, and to do well at a big event that they've grown up watching.

Are there rivalries that have developed this year on the women's Tour?
There's a rivalry amongst the whole top five women on the WCT. There are some good ones brewing between them, too. Sally and Carissa is a good one, and Carissa and Steph. Carissa Moore with one of her fans amid the frenzy. WSL / Margo

What does a rivalry mean on the ground, when the surfers are interacting and competing with each other?
The Tour's always had an attitude of 'whatever happens in the water stays in the water.' When we're looking at the rivalries, Sally and Carissa were battling for a World Title last year. Sally came so close but didn't quite get there. So you know that she just wants to beat everybody. And she works so hard.

What does the women's World Title race look like right now?
I think the Title race is still pretty open. Steph is definitely up there in the Title race. She has her throwaway from Brazil, now that we've got two throwaways--Steph's already got a 13th-place finish, which is one of her worst results in years. So she'll be looking to throw that away, so she's got points to make up.

Moving forward, where do you want to see the Tour go? What do you think the Tour still needs?
One event I'm really excited about is Trestles. I think, like the Fiji Pro, it will be another important moment for the tour, on the other side of the spectrum because it's such a high-performance wave, and we'll see the whole arsenal of tricks that the girls have. I'm excited to see what the girls will do there.

In terms of the Tour, we're halfway there in having great locations for the women. I think we're the first sport to have prize money parity. Which is cool because when you think about surfing, equality's never been something that would have come up. So now for us to have that now is incredible.

The Women's WCT Quarterfinals for the Vans US Open of Surfing will be webcast LIVE Saturday, August 2, 2014 at 11:30am PT on aspworldtour.com.

The 2020 WSL Championship Tour kicks off in one month, Julian Wilson gives back with Serious Fun, Andino and Marks centre court, and more.

Lakey Peterson will be chasing a World Title in 2020 with the support of a new partnership with the all-female brand, Sisstrevolution.

Tyler Wright took the winner's podium at the Vans US Open, and talks details about the board that helped her get there.

Hawaiian Malia Manuel faces off against Aussie Tyler Wright, in a battle for a spot in the Final.