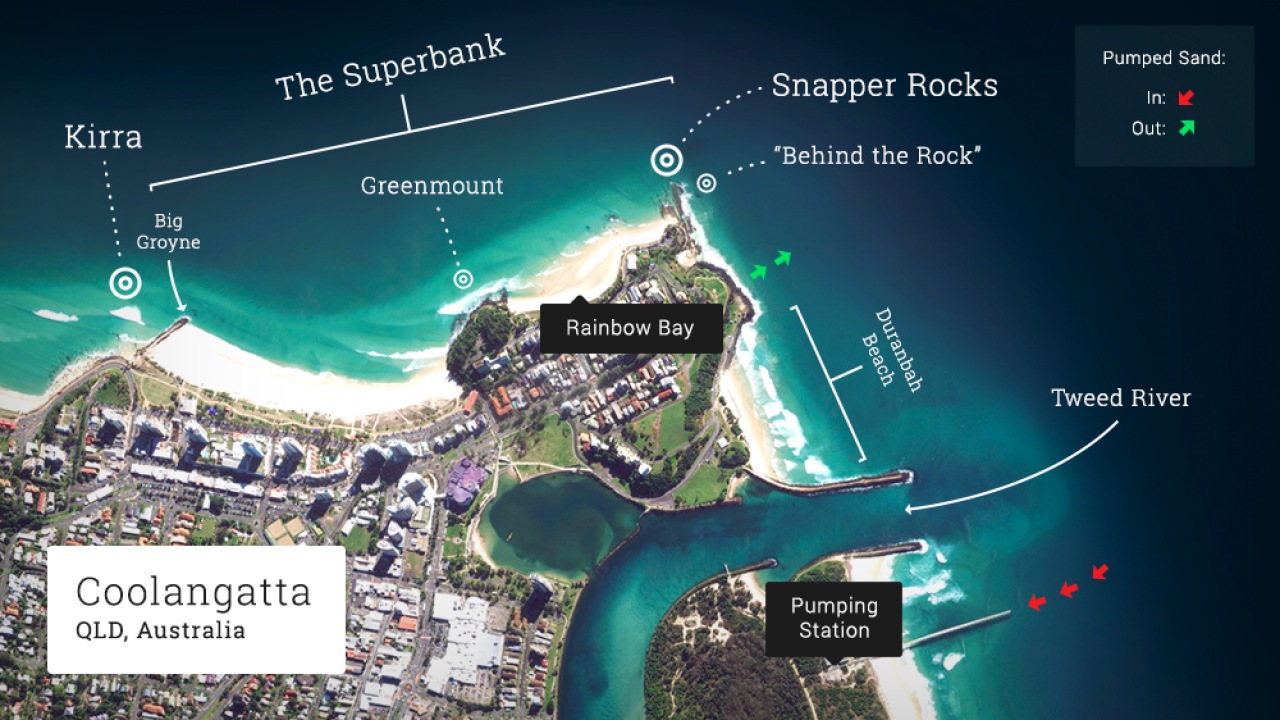 The formation of Coolangatta's Superbank changed what was possible in the sport, and moved the hub of the industry. - WSL

In 2002, Mick Fanning exploded onto the pro surfing scene. He was 20 years old and a rookie on the Championship Tour (CT).

In July of that year, he returned home to Coolangatta, Queensland, Australia, victorious after his breakthrough win at the Billabong Pro in Jeffreys Bay, a long pointbreak in South Africa. Accompanied by then-Association of Surfing Professionals (now the World Surf League) President Wayne "Rabbit" Bartholomew, the pair took in the ocean view from the top of Kirra Hill.

With the lineup at Jeffreys Bay fresh in their minds, Fanning and Bartholomew mused on which break was longer. If you could somehow link through to Kirra from Snapper Rocks just south, the ride might just eclipse the longest waves ridden at J-Bay. But it didn't quite seem possible. Not yet. There was a lot of sand filtering down from Snapper -- more than anyone had ever seen -- but not enough to fill a well at the northern end of Coolangatta Beach and adjoining Kirra.

Get Ready for Goldy
Trailer for the World Surf League's first elite event of 2015, the Quiksilver Pro Gold Coast.

Prior to the sand pumping, Snapper (as any of the local surfers will tell you) was generally pretty average: Mostly a right, sometimes a better left. Semi-reliable, but rarely anything like it is today. It was a big deal to connect a wave all the way west, to the rocks at Greenmount. Retirees and kids would swim in a tidal lagoon that occupied most of the beach at Rainbow Bay.

A Wave Is Born

But the pumping jetty being built around the corner, southeast near the Tweed River, changed it all. In 2001, the Gold Coast City Council hired a dredging company to to keep the mouth of the Tweed River free from sand and make if safe for boats. But no one anticipated what came next. Suddenly, 20-second tubes were real. It wasn't long before someone achieved the holy grail, riding a wave all the way from Snapper to Kirra. With the development of the Superbank, the Championship Tour changed the contest site from Burleigh to Snapper Rocks. - WSL / Kelly Cestari

With the new "Superbank" taking shape, the power base and performance hub of Gold Coast surfing shifted with it. Before the dredging ever began, Burleigh Heads (up the coast to the north) was the spot. It was more consistent, the unmistakable headland was (and still is) a beautiful attraction for locals and tourists, and it had a long history of contests that began in the 1970s with the first ever man-on-man pro event.

In 2002, when Joel Parkinson won the Quiksilver Pro Championship Tour event on the Gold Coast, it marked the beginning of a new era. Along with his fellow Cooly Kids (short for Coolangatta), Fanning and Dean Morrison, the three were spearheading a new generation of performance rippers. Six-time World Champion Stephanie Gilmore -- then a teen sensation -- was close behind. Bartholomew had established the global ASP headquarters at Coolangatta a few years earlier, with a direct view of the beach. He and his staff bore witness daily to the metamorphosis of the three neighboring points into something decidedly "Super" and, undeniably, more people than ever before started getting the waves of their lives. Not long after Fanning and Rabbit mused atop Kirra Hill, another Cooly Kid named Damon Harvey made everyone's dream his reality. The blonde goofyfooter launched himself into a wide set at Snapper and 4-plus minutes later stepped ashore beyond the Pizza Hut restaurant at North Kirra and into surfing's history books; a feat no one has replicated by way of a single ride since that day.

Of course, it hasn't stopped thousands of surfers from trying.

But the length of the wave and barrel depend on the amount of swell that hits the bank. At the 2015 Quiksilver Pro, small waves forced winner Filipe Toledo to use a more progressive approach to claim victory.