The WSL Samsung Galaxy CT celebrates the Top 34 male and Top 17 female surfers on the planet as they compete on an international, 20-event Tour and hunt for the undisputed world surfing crown. The Quiksilver and Roxy Pro Gold Coast events are essential to the yearlong Title race: They kick-start the season and 50 percent of the victors over the past decade have gone on to win that year's World Title. Gabriel Medina will compete at the Gold Coast as both the defending event champ and the reigning World Champ. - WSL / Kelly Cestari

Gabriel Medina (BRA), reigning WSL Champion and defending Quiksilver Pro Gold Coast winner, had a historic victory last season, edging out an international field of extraordinary talent to claim Brazil's first World Title. The young Brazilian has been honing his skills on home turf as well as engaging in strategic surf training in Santa Barbara, California and on the North Shore of Oahu en route to Australia.

Medina will face rookie and fellow Brazilian Wiggolly Dantas (BRA) and either the event wildcard or the winner of the trials in Round 1 of competition.

Mick Fanning (AUS) and Kelly Slater (USA), three-time and 11-time World Champions respectively, put on a spirited battle for the Crown in 2014, sending the Title race to the final event of the season, the Billabong Pipe Masters. Although Fanning narrowly missed out on a fourth Title, the lightning-fast Australian will enjoy the benefit of starting the 2015 season at home on the Gold Coast. Slater continues to redefine high performance with every heat, further cementing his legacy as one of the greatest athletes of all time. However, after three consecutive years of near-misses, will 2015 offer Slater an unprecedented 12th Title? Matt Banting, one of the 2015 rookies, competing at last year's event at the Gold Coast as a wildcard. - WSL / Kelly Cestari

Dane Reynolds (USA), a former CT surfer, has been announced as one of two wildcards for the Quiksilver Pro Gold Coast. The remaining wildcard spot will be determined through local trials, set to run February 27. 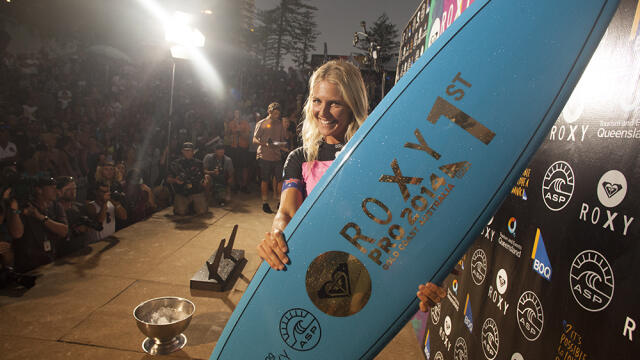 Stephanie Gilmore (AUS), reigning six-time World Champion, solidified her dynasty with a juggernaut performance in 2014, further approaching the all-time female Title record of seven, set by Layne Beachley (AUS) in 2006. The Gold Coast local started last year's run with a hometown win at Snapper Rocks and will look to do the same in 2015.

Gilmore faces a returned-to-form Silvana Lima (BRA) -- who spent 6 years in the women's elite Top 10 until falling off Tour due to injury in 2012 -- and the winner of the event trials in the opening round of competition. Tyler Wright (AUS), Carissa Moore (HAW) and Sally Fitzgibbons (AUS) turned the 2014 women's Title race into the most exciting and hard-fought in the sport's history and are poised once again to challenge Gilmore for the No. 1 spot.

Tatiana Weston-Webb (HAW) is the sole rookie for the 2015 class, but she'll be joined by returning CT surfers Lima and Sage Erickson (USA) who are both back after spending 2014 on the Qualifying Series (QS).

The Top 17 will be joined by the winner of the event trials for the 18-woman competitive field at the Roxy Pro Gold Coast.

The Quiksilver and Roxy Pro Gold Coast will stream LIVE at WorldSurfLeague.com. Make sure to set your Fantasy Surfing lineups at worldsurfleague.com/fantasy.