Robson Santos (BRA) celebrated his maiden Qualifying Series (QS) victory at the 2015 World Surf League (WSL) QS1500 Rip Curl Pro Argentina in Mar del Plata. Santos defeated Nic Hdez (USA) in the Final by a score of 15.17 to 10.67. With his win, Santos earned 1,500 points toward his QS rank and an extra 1,000 points valid towards the 2015 WSL South America Series rankings.

"Now it's time to head back home (Sao Paulo) and get back into training mode because there's another contest next week," claimed an ecstatic Santos, after thanking God and all his supporters. "Unfortunately, I don't have enough backing to dedicate myself to the QS. I'd like to have a sponsor that could support me in my dream of making it onto the Championship Tour. In the meantime, I'll focus on the contests on the Brazilian national circuit. I'm super stoked with my win here in Argentina and now I'm going to grab something to eat and celebrate because I'm starving." During the initial days of competition at the Rip Curl Pro Argentina, conditions never provided waves higher than 2 feet (0.5 meter) at the lefthand jetty at Playa Grande. This made wave selection crucial and kept the athletes on their toes in terms of strategy. On the final day of competition, wave height increased into the 3-foot (1-meter) range, however challenging conditions continued as strong winds degraded wave formation.

No one showed better judgment on which waves to paddle into than Santos. He started off the day by narrowly defeating local favorite Leandro Usuna (ARG) in Heat 1 of the Quarterfinals. In the Semifinals, Santos advanced again after taking down the experienced competitor Hizunome Bettero (BRA) with a score of 14.35 to 13.50. 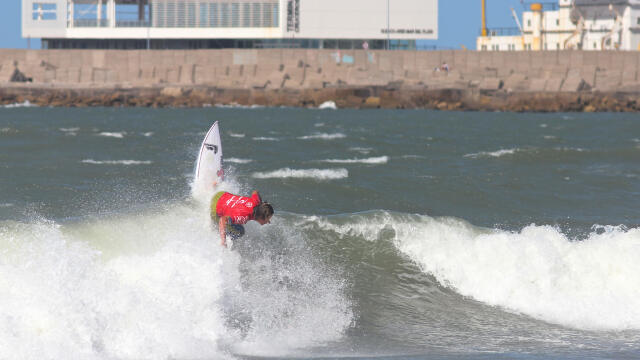 On the other side of the heat draw, Hdez showed great poise as he steadily advanced day after day, displaying polished surfing on his way to the Final. In Heat 3 of the Quarterfinals, Hdez overcame Luel Felipe (BRA), who looked lightening-quick throughout the week.

Afterwards, Hdez faced Lucas Silveira (BRA), who received recent acclaim after his efforts during the 2014 year-end Hawaiian leg. Hdez nudged past Silveira by a score of 13.60 to 12.10 to reach the Finals. For his runner-up finish, Hdez earned 1,125 QS ranking points.

The 2015 WSL QS1500 Rip Curl Pro Argentina in Mar del Plata was the first QS event of the year held in South America. The next QS event will be the QS10000 Quiksilver Saquarema Pro presented by Powerade at Praia de Itauna, in Saquarema, Brazil May 4-10. Following that will be the QS1500 Maui and Sons Arica Pro Tour at El Gringo in Arica, Chile August 4-9.

Round 2 of the Vans Pro Junior event was completed in one-to-three foot conditions and all but one of the top seeds advanced to Round 3.

The Fins Pro in Belmar, New Jersey, wrapped up round 1 and 2, with just eight surfers remaining.

The contest kicks off the 2015 WSL Qualifying Series in South America.

Over 100 surfers representing 13 countries are confirmed for the QS1500 Rip Curl Pro Argentina.