Heavy lineups at Lower Trestles and heavy wipeouts in Chile. Colorful boards and Red Carpet fashion. Everything was bright and blooming this week. The Oakley Lowers Pro kicked off this week and it lit up social for more than one reason: First, the event marks the return of the Qualifying Series (QS) to the much-adored surf playground that is Lower Trestles. Secondly, it's the first 10,000-point event of the season and a number of surfers from the elite Tour were in the mix. But mostly, after minimal surf for much of the week, the swell started to fill in toward Day 4 of competition: Waves were not too big, not too small, but just right. Even World Surf League (WSL) Deputy Commissioner Travis Logie was itching to get in the water. 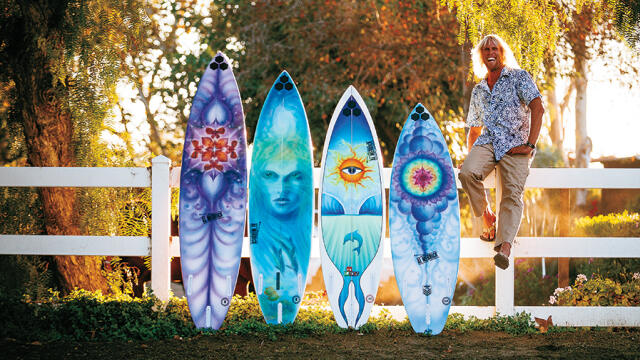 While brothers Patrick and Tanner compete at Lowers, Dane Gudauskas (USA) is making his own headlines. A recent Surfing Mag feature spotlighted the psychedelic artwork Gudauskas has commissioned for his boards. In the article he says, "Sure, people think of this style of artwork as being really retro, but when guys like Terry Fitzgerald were getting sprays like this, they were getting it on the most cutting-edge boards of the time. I think these boards are really representative of what I surf on a daily basis, and that's more interesting to me than getting a cool spray on a single-fin for nostalgia's sake. But it's funny to think about how these boards will look to people in 15 or 20 years. Maybe they'll look as dated then as a '70s single-fin looks to us now." (Read the full article.)

Rothman Accepts Trophy in Chile
4:01
Fresh off the podium from the Quiksilver Ceremonial, Makuakai Rothman accepts the 2014/2015 Championship Trophy.

The Big Wave Tour had a massive week, both literally and figuratively. A 40-foot swell ushered in the new BWT season just 24 hours ahead of the 15th annual Big Wave Awards. That meant two trophies for reigning World Champ Makuakai Rothman (HAW), who was too busy winning the Quiksilver Ceremonial to attend the award show. Instead, the trophy made the long journey from WSL Headquarters to Punta de Lobos, making it a pretty phenomenal day for Rothman.