Highlights: Big Manuevers at Saquarema
2:04
Best performances of the day as the field narrows at Itauna beach.

Competition continued Thursday until Heat 6 of the Round of 48 (Round 2) at the 2015 WSL Quiksilver Pro Saquarema presented by Powerade. Clean conditions with waves in the 3-4 foot range (1-1.5 meters) progressively deteriorated as onshore winds picked up. However, plenty of high-scoring opportunities were on hand as the international field of surfers battled for the 10,000 World Surf League (WSL) Qualifying Series (QS) ranking points available at Praia de Itauna, in Rio de Janeiro. Aussie Tom Whitaker scored the day's highest heat total during the Round of 96. - WSL

Veteran surfer Tom Whitaker (AUS) displayed his prowess and experience as he scored the day's highest heat score of a 17.50 (9.43 + 8.07) in Heat 18 of the Round of 96. Michael Dunphy (USA) advanced in 2nd place over Willian Cardoso (BRA) and Jose Ferreira (PRT) respectively.

"It was incredible!," said Whitaker. "I felt very comfortable in these types of conditions, there were plenty of good waves during the heat and I had a lot of fun. Priority was crucial for wave selection, and without a doubt that helped me out a lot and I was lucky enough to take advantage of that perfect wave."

The defending champion at the Quiksilver Pro Saquarema, Wiggolly Dantas (BRA), was in sync with the waves at Praia de Itauna and was able to advance into the Round of 48 alongside Maxime Huscenot (FRA). Deivid Silva (BRA) and Medi Veminardi (REU) were both eliminated from competition. 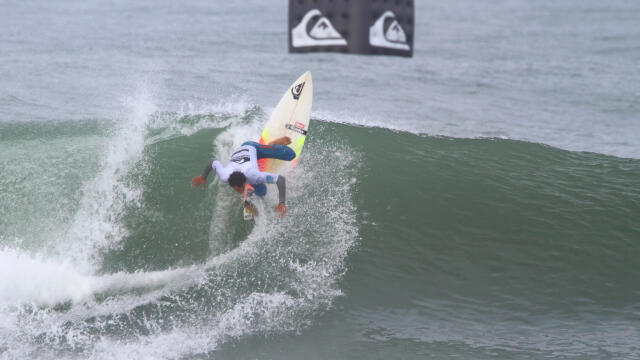 French surfer Maxime Huscenot made his way to the Round of 48 (Round 2). - WSL

"The waves have gotten smaller today, but they're breaking better over the sandbank. It's easier to surf and I found two waves that were good enough to get me into first place in the heat," said Dantas. "I'm feeling very focused and relaxed. I won here last year and it was an important result in qualifying for the CT. Saquarema's a special place. There are always good waves and it fits in well with my style of surfing. It feels great to be here again."

"Thank God I was able to find some good waves," said Ferreira. "My strategy worked out. I switched to a smaller board, which was the one I had been using every day before the competition. It felt perfect and I hope to maintain my rhythm and get as far as possible in this event. It took a long time for the sets to come, so I wanted to catch as many waves as possible in the beginning of the heat. I got some good scores and was able to put some pressure on my opponents."

Only 36 surfers from 11 different nations remain in contention for the U$40,000 in prize money and 10,000 WSL QS ranking points on offer for the event winner.

Action will continue Friday, May 8 in the Round of 48. In Heat 7, Michael Wright (AUS), Nic Von Rupp (PRT), Hiroto Ohhara (JPN) and Adam Melling (AUS) will face off to see who will advance in competition at the 2015 Quiksilver Pro Saquarema. Watch live at www.worldsurfleague.com.