Ballito Pro pres. by Billabong
2:27
High-stakes competition returns to the shores of South Africa for the QS 10,000.

The Ballito Pro presented by Billabong kicked off Monday, June 29 in South Africa, with 10,000 Qualifying Series (QS) points on the line. The contest is one of only a handful remaining QS 10,000-rated events of 2015 and has enough points-earning potential to determine which surfers will be eligible to compete in the high-stakes QS events from August onwards. Just as important, the points will impact surfers' QS rankings, from which the Top 10 qualify for the elite Championship Tour (CT) in 2016.

Four of those 10 spots are already filled by surfers who are currently on the 2015 elite Tour. Kolohe Andino (USA) and Dusty Payne (HAW) are two of them: They are No. 30 and No. 33 on the CT Jeep Leaderboard respectively, well below the requalifying line of No. 22. CT surfers ranked No. 23 or lower on the CT must requalify with their points from the QS, so they'll need good results at Ballito to either solidify their QS rankings as backup (Andino is No. 9 on the QS, while Payne is No. 10). 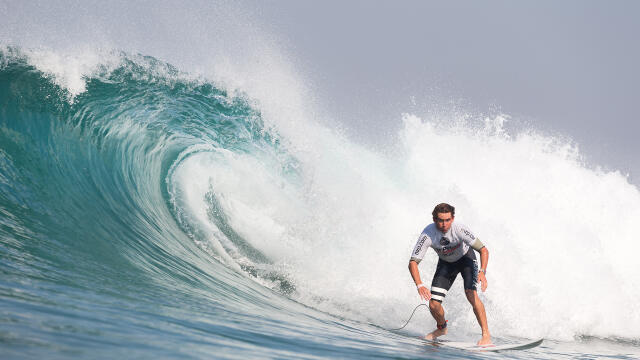 Michael Dunphy, who made it to Round 5 last year in Ballito, is just 20 points behind the current cutoff. - WSL / Kelly Cestari

It is looking unlikely, though, that Jeremy Flores (FRA) and Filipe Toledo (BRA) will need their QS results to requalify. They've been killing it on the CT and are ranked well above the top 22 cutoff (No. 10 and No. 2 respectively). That opens up two spots for QS surfers, making No. 11 Caio Ibelli (BRA) and No. 12 Noe Mar McGonagle (CRI) eligible for the elite Tour, if the season ended now.

But Ballito has the potential to cause a significant shift in rankings for even the elite CT surfers and the overall qualification situation. For example, on the QS rankings there are only 620 points between spot No. 11 (Ibelli) and No. 18 (Michael Rodrigues) -- a narrow gap that can easily be upturned in South Africa.

From there, the gaps in point totals per placing become wider and wider so low-ranked surfers need a great result at Ballito -- Quarters or Semis at least -- to climb toward or into the Top 10. One thing to note is that most of lower-ranked surfers haven't yet competed in five events -- the total number of contests that count toward an athlete's ranking. They are, in a sense, competing against themselves at this point as much as they're competing against each other. Kolohe Andino already has two QS event wins this season. Can he solidify his overall ranking at the Ballito Pro? - WSL / Matt Dunbar

At Ballito, the wide range of conditions possible makes it hard to predict which surfers are likely perform well. Last year's contest saw clean sets of 3-to-5 feet but the year before solid 10-foot survival surf, making it one of the more challenging waves for the competitors, who needed full quivers.

What will be the cutoff points this year? Again, with only a few big events completed, it's tough to say at this point. As of date of publish, around 18,000 points is the likely dividing line, but this may need revising later in the year.

The Ballito Pro presented by Billabong will stream LIVE here and on the WSL app through July 5.