Ballito Pro: Official Trailer
2:27
High-stakes competition returns to the shores of South Africa for the QS 10,000.

South Africa's surf stars are ready to take on the hungry field of Qualifying Series (QS) competitors for the 2015 Ballito Pro presented by Billabong, which kicks off June 29 and runs until July 5 at Surfer's Beach on the KwaDukuza Coast.

A QS 10,000-rated event, the Ballito Pro features a highly competitive 96-man field, vying for a total prize-purse of $250,000 (over R3 million) and invaluable ranking points. The high-level draw includes two South African surfers, Jordy Smith (Durban) and Beyrick de Vries (Umhlanga), who qualified for the event based on their 2014 year-end rankings. Two more, Michael February (Kommetjie) and Dale Staples (St. Francis Bay), have received wildcards as they are the highest-placed local surfers on the current QS rankings.

Another 17 locals will be aiming for two of the spots allocated to the Ballito Pro Trials top two finishers. The Trials consist of a 32-man draw and will run June 28. Smith, who injured his knee while freesurfing outside the contest arena, has been following a strenuous rehabilitation program and returned to his hometown earlier this week. He's currently ranked No. 18 on the elite Samsung Galaxy WSL Championship Tour (CT) won the Ballito event in 2010. the Ballito Pro will be his first event after recovering from injury.

"I tore the meniscus and capsule in my knee, but it's recovered now and it feels great to back in the water," Smith said. "It's a great time of year to be home and I'm just looking to gain some confidence surfing again. It's all about winning the first heat and it's going to be a blast for sure. I love coming home."

De Vries, meanwhile, is 63rd on the QS rankings and, having grown up on the KwaDukuza coast, will have massive hometown support in his bid to win at Ballito.

"The Ballito Pro is one event I really want to win," De Vries said. "Every year it comes around I think I'm going to be nervous, but I end up feeling good. I went to school with the guys from Ballito so there are familiar faces on the beach supporting me." 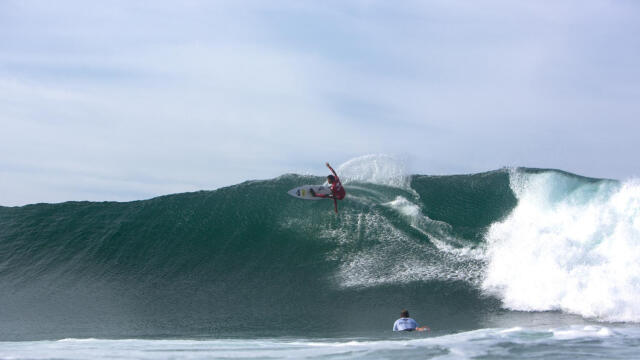 Michael February had his career-best finish in April when he placed runner-up at the Martinique Pro. - WSL

After a career-best finish in the QS 3,000 Martinique Pro in April, February is the country's highest-ranked QS surfer at No. 58 and is happy to earn a wildcard for the Ballito Pro. The lanky 22-year-old's distinctive yet versatile style that combines powerful rail turns with progressive aerial maneuvers. His approach is tailor-made for the wide range of surf conditions the competitors are likely to face during the seven-day event.

"It's super important to get a wildcard as the trials are pretty hectic this year with a combination of internationals and locals," February said. "I'm guaranteed points now and can focus on the main event and not the trials, so that's going to help a lot. I've also been to Ballito plenty of times so I'm comfortable in the waves and I've been spending plenty of time in the water."

Jeremy Flores (FRA), ranked No. 10 on the CT and the runaway leader on the QS rankings, has withdrawn from the event after suffering serious facial injuries during a surf trip to Indonesia.

Competition kicks off June 29 and will be broadcast LIVE on worldsurfleague.com and the WSL app.

With a stand-out performance from Marc Lacomare, the Azores Airlines Pro scored pristine Atlantic surfer to kick things off.