El Gringo, Arica, Ex Isla Alarcán / CHILE (Tuesday, 04, Aug, 2015) - On Tuesday, a new swell presented stormy conditions with waves in the 10-12 foot range (3-4 meters) at El Gringo for the first day of the waiting period at the Maui and Sons Arica Pro Tour in Chile. The World Surf League QS 1500 event will determine the winner of the 2015 WSL South America title. The top-ranked surfer from each of the seven WSL Regional Offices will automatically be eligible to participate in all of the WSL QS 6000 and QS 10000 events in 2016. 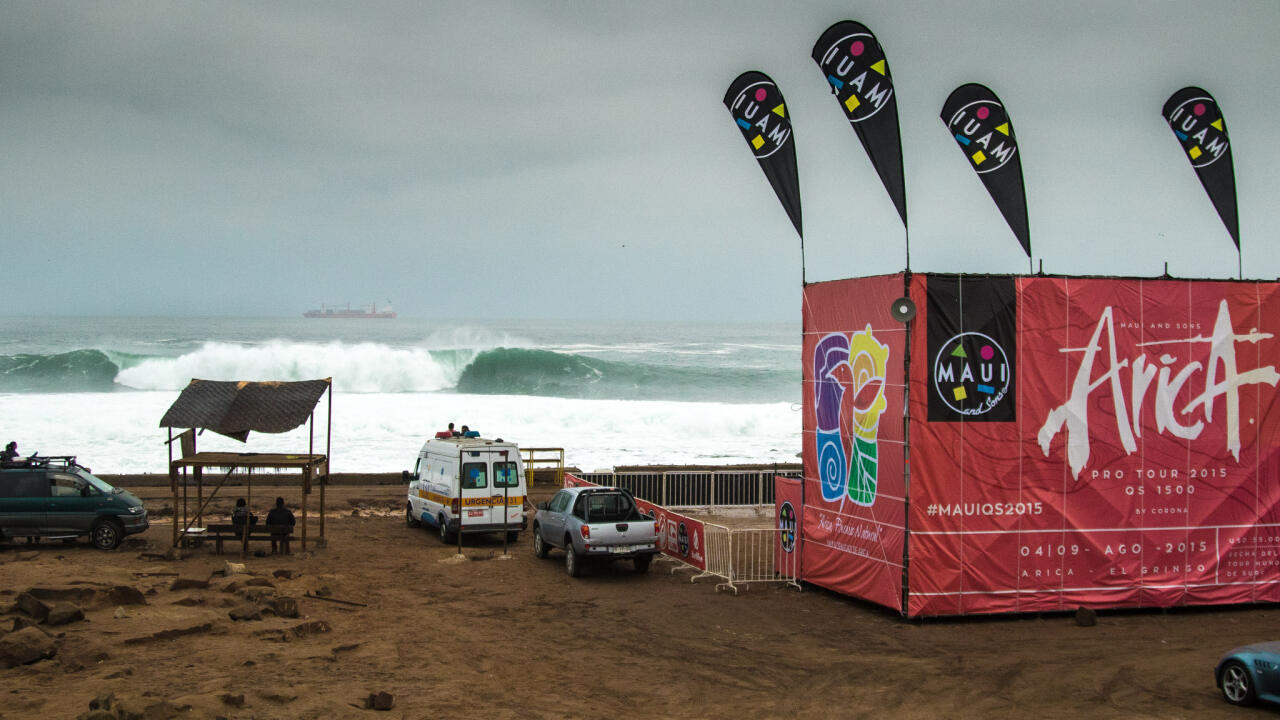 Robson Santos (BRA) currently sits atop the WSL South America rankings and is looking to seal the deal with a solid performance in Arica. The only other athlete that has mathematical chances of overtaking Santos is the big wave charger, Lucas Silveira (BRA). Both surfers excel in powerful barrels, and El Gringo's treacherous reef will be an even playing field for the title frontrunners.

The 62 athletes (from over 10 countries) were unanimous in their decision to call the day off.

"The event was called off for the day here in Arica," stated Klaus Kaiser, the WSL South America Tour Manager. "Conditions are complicated. There are some big sets in the 10-12 ft. range, but the swell direction isn't hitting the reef at a good angle so there are a lot of closeouts. It's too dangerous for the athletes, so the Event Organizers have decided to make another call at 8am (local time) on Wednesday. The surfers applauded the decision; no one wanted to go out. Plus, the forecast is looking great for the next few days." Despite stormy conditions at the main site at El Gringo, athletes at the event and other big-wave chargers headed to another famed peak in Arica, El Buey, where things were firing. Although competition didn't officially begin at the QS event, big barrels and cold-water action were definitely on display in Chile.

The 2015 WSL South America QS 1500 Maui and Sons Arica Pro Tour has a variety of global representatives. The largest group is headed by the Brazilians (15), followed by the host country of Chile (14), then Peru (10), the Hawaiian contingent is strong (10), followed by the USA (4), Australia (3), Argentina (3), France (2) and finally Venezuela and St. Bart's with one each.

The winner of the event will take home U$ 8,000 in prize money along with 1,500 WSL QS ranking points and 1,000 WSL South America regional ranking points. Only the Top 10 surfers on the QS Rankings at the end of the 2015 Surfing Season will qualify for the 2016 Championship Tour (CT). Watch all the action live at: www.worldsurfleague.com

About the World Surf League
The World Surf League (WSL) organizes the annual tour of professional surf competitions and broadcasts each event live at WorldSurfLeague.com where you can experience the athleticism, drama and adventure of competitive surfing -- anywhere and anytime it's on. The WSL sanctions and operates the following tours: the Junior Tour, Longboard Tour, the Qualifying Series (QS), the Big Wave Tour and the crown jewel of the sport, the WSL Championship Tour (CT) which determines the sport's undisputed world champions. The organization is headquartered in Santa Monica, California with Commercial Offices in New York. The offices are supported by regional centers in Africa, Asia, Australasia, Europe, Hawaii, North America and South America.