Pit Crew: The Surf Coach
5:14
From caddying in the lineup to reviewing tape after day's end, coaches are upping the game of up-and-comers and pros alike.

Surfers have always had thing for independence. Surfing, after all, is a very personal pursuit. That explains why there's traditionally been resistance to the idea of surfers needing coaches. But times are clearly changing. Today most surfers on the elite level have benefited from some form of training through a surf club, a high school surf team, or a national organization. While coaches on Tour are still the exception and not the rule, their ranks are growing. But what's also intriguing about this trend is that today's coaches are less about the X's and O's of surf technique, and more about the base layers of motivation and happiness. Here's what the surfers and coaches have to say about their pairings. Matt Wilkinson and Glenn Hall head out for some practice before the Vans Triple Crown. - WSL / Kelly Cestari

So how do you find these guys? For Matt Wilkinson, who started looking after he finished below the CT cutoff in 2014 (he requalified at No. 8 on the Qualifying Series), it was simply a matter of having an honest moment with a good mate. "At the end of last year I was so close to falling off Tour and it scared me a little bit," Wilko said in a WSL interview last October. "I spoke to Glenn over Christmas, we were having drinks together and he was like, 'You've been Tour for five years. It's time to put some effort in and see what you can do. You've had your fun." And I said, 'Yup. That's absolutely right.'"

Check out Hall's interview on being a surf coach. 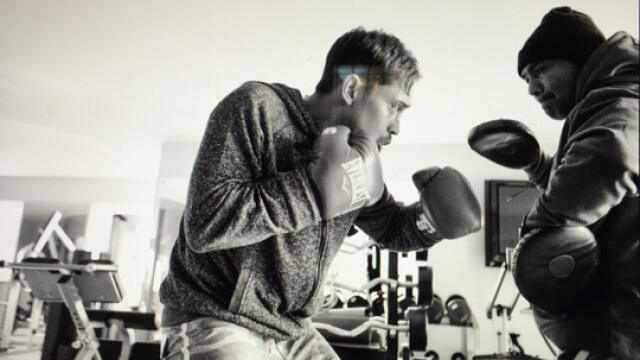 For some surfer-coach pairs, training is a science. Makuakai Rothman, this year's defending Big Wave Tour champion, grew up in Hawaii and, like many of his peers and predecessors, got good by simply putting in hours in the water. But to be great, trainer Robert Garcia, who saw Rothman grow up and coaches mainly MMA athletes and boxers, put together a plan of success that included a structured method of eating, sleeping and gym work, in addition to putting time in on the water. "Once an athlete's over-trained there's no second-wind. He gets in that chronic fatigue. So it's all about pacing. It has a lot to do with diet. We work closely with Laird Hamilton and research the recovery cycle. We can calculate energy and what's available. Then we have feedback from the athlete. If the surf looks good we might surf for the next few days and not do any training." (Read more about Training a Big Wave Champ.)

Chris Gallagher and the Hobgoods/the Marshalls Some athletes prefer to remain coachless. But Chris Gallagher, who started training the Hobgood brothers C.J. and Damien early in their respective careers, says the key to success isn't the coach, it's the coupling. "Some people thrive with no one around them and others may thrive with a full entourage," he said in his WSL Pit Crew interview. "Somewhere in the middle is probably the best call. But if the chemistry isn't there, you could have the best people in their field and it may not work." Johnny Gannon rushed to the water's edge in 2009 when his then-pupil Taj Burrow won the 2009 Pipe Masters. - WSL / Kirstin

Results from a successful pairing can lead to long-term, career-changing partnerships. 2015 was Taj Burrow's first year traveling without longtime coach and trainer Johnny Gannon. When Gannon stepped down in 2014, Stab magazine asked Burrow what his career would have been like without him. His response: "I would've probably got a major injury and fallen off Tour. Maybe not fallen off, but I'm sure of the fact that I'd be in nowhere near as good a shape. But I just know I would've been a lot more prone to injury if I didn't do what Johnny's taught me. I'd be much worse-off physically. Not as healthy and happy and positive, I guess."

And nobody wants to see that.