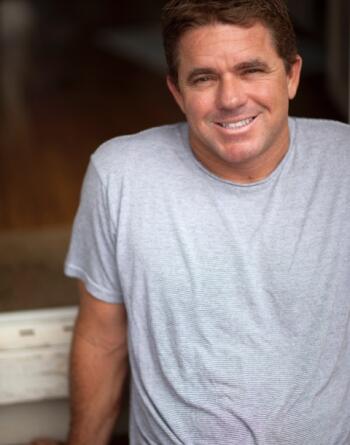 As a coach, Chris Gallagher is a family man. The former Championship Tour (CT) surfer hung up the competition towel in 2000 and, shortly after, teamed up with brothers C.J. (USA) and Damien Hobgood (USA), shaping for and coaching them as they climbed to the upper echelons of pro surfing. Gallagher is now working with a new pair of siblings -- rising Junior stars Jake and Nick Marshall (USA) -- and he continues to provide feedback and advice to C.J. and other pros on Tour. As the 2015 season was getting underway, Gallagher opened up about the view from the sidelines, what it takes to be a champ, and what it takes to be a coach.

World Surf League: Is there a piece of advice you give every athlete with whom you work?
Chris Gallagher: It's impossible to be over-prepared. Especially in a sport with as many variables as surfing. Control the things you can and hopefully be prepared to adjust to whatever the ocean throws at you.

Psychology of the Sticker
C.J. Hobgood was the subject of a 4-part series 2014. It would be his final season on the CT.

WSL: Do you have personal relationships with the athletes and/or their families as well as a professional one?
CG: Coaching is very personal. Taking wins and losses together, living and dying by the decisions you make. It can be very hard to find that special relationship where it doesn't get weird. Many athletes have a hard time letting go and trusting a coach completely and sharing in the successes and failures. Coaching is a lot more than all the technicalities of surfing and competing. Even on a casual basis a coach can become psychologist, life counselor, and more.

WSL: Do you offer advice on anything other than technique? For example, do you educate surfers on different equipment?
CG: Nothing is understated more in the media than the need and difficulties surfers have with their boards, fins, and gear. There is a major and an ongoing search for the Magic Board. Coupled with that is they fall apart pretty quick. Every World Title or qualifying run was usually the result of one Magic Board that did most of the work. Equipment is huge.

Even on a casual basis a coach can become psychologist and life counselor.

WSL: What's it like to watch from the sidelines? Are you nervous? Frustrated?
CG: When I first started working with the Hobgoods and was on Tour I would get pretty nervous and feel very connected with the performance. Now not so much. I realized over the years that I can't control a single thing after they paddle out. I am definitely not the jump around, whistling, towel-waving coach. It's up to them once they leave the beach. I may get frustrated if the surfer makes a stupid mistake or if the ocean doesn't cooperate, but in general I take the "whatever happens was meant to happen" approach. WSL: Who does a surfer need in his corner, so to speak? When you started out on Tour there were few surf coaches. How has that changed?
CG: It's changed big time. I was completely alone and had to be my own coach and sometimes to my friends as well. The only way I found I could get better was to study Occy (Mark Occhilupo) as well as Tom Curren in a mirror to make him look goofyfooted. Unfortunately, I figured out how to compete after I was done competing.

As far as who one might need in their corner differs from athlete to athlete. Some people thrive with no one around them and others may thrive with a full entourage. Somewhere in the middle is probably the best call. But like I said earlier, if the chemistry isn't there, you could have the best people in their field and it may not work.

I realized over the years that I can't control a single thing after they paddle out.

WSL: What is the regimen you prescribe in terms of diet, exercise and surfing? Should anything else be added to that list? Do your "pupils" adhere to that prescription strictly?
CG: Even if you eat well, train and surf a ton, an athlete will struggle to improve without technique training. There are only a few gifted athletes that have great technique without effort. The rest of us have to get to work. In the past there was this: "He is just better or more talented." But through the years of teaching technique I have seen people catch up to or pass the gifted through hard work and focus on technique. I will say that making lasting changes in one's surfing is very difficult and takes a lot of effort and can be frustrating. I can recognize faults and have ways to fix them, but it is up to the athlete to make those changes. It can be a long road.

WSL: Is coaching how you stay connected to surfing? What are your solo sessions like?
CG: Through coaching I have found even as I get older my technique has improved, which makes surfing more fun and engaging. Although with age I have also found my consistency has gone down and sometimes the body doesn't listen to what I tell it to do. In that way it's rewarding to be able to take that knowledge and transfer it to a younger body. Especially bigger, more dynamic moves like airs and big tail-slides.

Gallagher at Margaret River
Gallagher's freesurfs look a little different these days, but are just as epic.

WSL: What was your best moment as a coach? And what was the worst?
CG: Best moment was caddying for C.J. when he won Sunset. Goofyfoots don't win in big Sunset, he had never done well out there. It was a flawless performance through the event and being in the water makes a coach way more involved. At one point in the back end of the final he needed a big score. He paddled past and asked if he should look for the medium sets. I yelled at him to go out the back and catch a bomb! Which can be risky on a huge west swell. He paddled way outside and straight into the winning wave. A solid 12-15 footer. Full storybook ending.

Worst moments are always when I give crappy advice for a heat and the game plan sucked. Can't win 'em all but being responsible for a bad decision eats at me.

Episode 3 takes us back to 2001 when a young Mick Fanning took out the longest-running stop on the Championship Tour.

Red Bull's 'Made In' series joins Gonzalez and tow partner Adrian Fernandez for a harrowing session at their big wave obsession, The Slab.

Local authorities have closed the beaches in Coolangatta and Surfer's Paradise as a safety precaution amid the coronavirus pandemic.