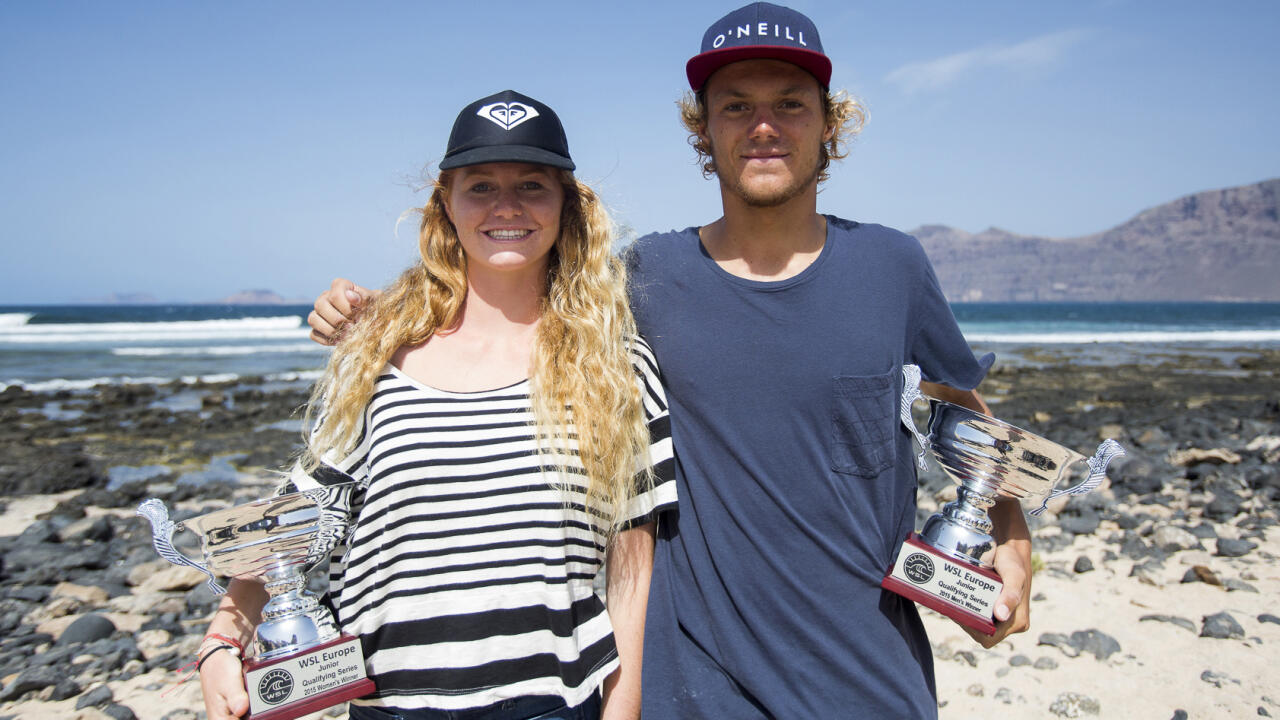 Get ready for six events to determine who will replace Nelson Cloarec and Juliette Brice as the regional Junior Champions in 2016. - WSL / Gines Diaz

A new Junior Qualifying Series format is debuting this year, in which athletes must be 18 and younger (the age cutoff was previously 20), and the World Surf League is happy to release the European schedule of events in that category.

Starting Wednesday, the Caparica Junior Pro will revive the intense battles that culminated last year with the crowning of France's Nelson Cloarec and Juliette Brice as the region's Junior Champions.

The Caparica event, now in its second year, will bring back the Junior crowd to Portugal for the season opener at Praia do Paraiso in Costa da Caparica. Part of a larger festival including music acts, skateboarding demos and more activities, the Caparica Junior Pro is the perfect way to launch an exciting 2016 Junior Qualifying Series in spring.

A new addition in Southwest France will follow, as the second stop in the series. The Junior Pro Biscarrosse from April 28 - May 1, will feature future stars of our sport in the quality beach breaks of Landes, about an hour north of Hossegor. "With its nine-kilometer stretch of beach, Biscarrosse is one of the most popular beach resorts on the coast," Alain Dudon, Mayor of Biscarrosse stated. "Tourists love the area, and so do water sports enthusiasts, that's why it has become so popular among surfers of all kinds. We are heavily invested in the support of the sport and are extremely happy to host the only French stop on the European Junior Qualifying Series. We wish these up-and-coming great surfers all the best in this competition."

Back in Portugal from June 23-26, surfers will take on peeling right-handers off the main jetty in Espinho for the third edition of the Junior Pro Espinho. Last year's event winner Ariane Ochoa (EUK) will have a chance to defend her title and take an early lead. "This event brings very good memories back to me, it was my first ever Junior win, and having the opportunity to participate in it again makes me very happy," Ochoa said. "I felt really comfortable with the people in Espinho and also the place was great. My main goal this season is to win the European Junior title and to participate in many QS events to get a good ranking."

In early July, the region's best up-and-comers will converge in A Coruña, the second-largest city of Galicia for a complete surf festival, host to no less than QS, Longboard QS and Junior QS, men's and women's divisions. Younger surfers will have the rare opportunity to showcase their abilities amongst a senior crowd of experienced competitors. With two potential sites, one in the heart of A Coruña and a back-up option in Caion, Galicia could provide excellent conditions for Stop No. 4 of 6 in the JQS series. Surfers will then move on to the most popular event on tour, the Sopela Pro Junior from July 14-17 in the Basque Country. A long-standing Junior event in Europe, Sopela attracts huge crowds on its pristine, white-sand beach just a few minutes away from nearby Bilbao. Punchy waves and delicious local foods make for an unforgettable experience in the area.

The months of August, September and October will then focus on the Qualifying Series in Europe, giving Juniors a well-deserved break before the final stop on tour.

From November 9-13, Europe's best will finally meet on the dreamy Canary Island of Lanzarote for the Franito Pro Junior Teguise, an epic final battle in pristine waters. The long reef-pointbreak setup of San Juan has witnessed some of the world's best surfers perform over the years and is the ideal proving ground for aspiring professional athletes. Lanzarote is a dreamy setup for the European Junior finals. - WSL / Adrian Rodd

"We are really looking forward to great Junior Qualifying Series in Europe this season," said Rob Gunning, European Tour Manager. "It is the start of a new era with the U18 competitors now poised to showcase their talents. Our goal is to build an even stronger JQS season to help prepare our young surfers in their quest to make it in the QS and CT ranks in the future years."

Out of the six events this year, surfers will drop their lowest two results and the European rankings will award the prestigious regional crown as well as tickets for the World Junior Championships.

5:02
Finals day unfolds in good waves at San Juan to crown the event champions and award the European Junior Titles.