As noted in the Men's Rio Insider, Brazil offers the first beach break location of the season. On the Women's side, the last few years have shown more stability in results - as the usual suspects have generally prevailed - but there are hints at the subtle shift in power towards a younger generation. Beach breaks are generally high-entropy with drastic sensitivity to weather and swell conditions, but the Rio crowd is just as lively on the beach. This is going to be a fun event. Note: Statistics are measured since 2013 only, as the most accurate representation of a surfer's relevant performances and current expectations. Carissa Moore (Projected 14.75 AHS / 110.18 FP) - Carissa Moore has made the SF every event this season, but hasn't yet broken through that ceiling. It will happen, though, as she'll be looking to end Courtney Conlogue's hot start to 2016 as soon as possible. Last year, the two were in the same situation with inverse roles; Moore finished 1-2-2 over the first three events compared Courtney's 5-3-1, and while they each had a Win heading into Rio, it was here that they would exchange first place overall. For the coup to repeat, Carissa needs to win Rio without Conlogue making the QF, but it's intriguingly possible. Moore has a strong 13.75 Average Heat Score (AHS) in beach breaks - 13.84 specifically in Rio - and though she hasn't won the event since 2011, she's made QF or better every year. Tier A ownership will more than likely be even for Brazil, but a shade of value may come from Courtney's beach break popularity.
Odds - 5:1 Courtney Conlogue (Projected 14 AHS / 89.82 FP) - Blowing out of the gates this year, Courtney Conlogue is off to a mammoth start. With 322.08 Fantasy Points (FP) already, she's averaging an insane 107.36 FP per event. There's a lot to like heading into Rio, where Conlogue won in 2015. At beach breaks she has a 13.63 AHS and trending upward thanks to a slightly higher 13.49 last season. Rounds per Event Average (REA) shows how many rounds a surfer generally attains for a certain location; for the Women's CT, 7 is the maximum, which would indicate they have reached the F (7th round) every time. Courtney's REA for Brazil is 6, so feel free to draft with confidence.
Odds - 9:1 Sally Fitzgibbons (Projected 15.11 AHS / 114.73 FP) - Sally is projected for success at Rio. Like, win-the-event success. So this is one of those cases where regardless how many teams will be drafting Fitzgibbons, you'll simply have to be on board. Forget ceiling, she's actually projected to win, so you can't afford to stay away. That's what the book says, anyway, so if you want to get wild and fade, there's potential as well - it's just much less probable. Sally has the best beach break AHS on tour at 14.18, and while she didn't make the QF here last year, she's finished 2-1-2-1-9 since 2011, which is solid if 2015 was a fluke. Best beach break single heat score? Sally, 19.77. Top ranked beach break REA? Sally, 6.08. Just remember to hedge with your second pick.
Odds - 4:1 Tatiana Weston-Webb (Projected 13.05 AHS / 70.35 FP) - Over the last two events, Tatiana has been the #1 Tier B pick. She's slowly chipping away at top three in the rankings and will look to capitalize if they falter in Rio. Weston-Webb has a bright future, and in her sophomore campaign she's already cracked the leaderboard top 5. Rio was not a highlight of her rookie season, though; she finished 9th with a 10.31 AHS for 46.53 FP. Beach breaks were generally unkind as a whole, where Weston-Webb posted a cumulative 12.29 AHS. Not bad, but not good - actually dead center of the bell curve. She'll likely be on a high percentage of teams, too, so this could be a strategic fade depending on your league size.
Odds - 20:1 Malia Manuel (Projected 13.16 AHS / 70.75 FP) - Projected nearly identical to Tatiana Weston-Webb, Malia Manuel looks like a much better value for Rio. She's highly recommended in larger leagues, where her event potential is close to Tati and she'll be far less owned; this is the gap you're looking for with contrarian options. That's not to say you can't win by using the most drafted surfers, but for larger leagues, this is a great example. Let's say Weston-Webb is drafted by 1,000 teams and Manuel by just you. If Malia outscores Tatiana by even 0.01 FP, you just gave yourself a unique edge over those 1,000. And this is a case where Malia is actually projected (slightly) better. We'll find out when they face-off in R1H2 alongside Keely Andrew.
Odds - 20:1 Bianca Buitendag dropped Sally, Lakey and Carissa en route to her Final appearance last year; with the same seed, can she do it again? - WSL / Kelly Cestari

Bianca Buitendag (Projected 13.17 AHS / 70.15 FP) - It's tough to say if fantasy players will be onto Buitendag or if she'll emerge as a Sleeper value; either way, she's been more successful than Carissa Moore over the last three contests in Brazil (breaking their tie by beating her in the 2015 SF). Bianca took Courtney Conlogue to the F and although she lost, it was still encouraging as the 8th seed. The risk here is Buitendag's 8th seed again; though it got her to the main stage a year ago, she needed to successfully beat Sally, Lakey and Carissa. She did it, but can she do it again? The odds are stacked against her, but this is the praia - anything can happen.
Odds - 22:1

Honorable mention to Stephanie Gilmore (Projected 13.79 AHS / 74.05 FP) and Johanne Defay (Projected 12.13 AHS / 65.25 FP). The two have great potential, but Gilmore's ownership will be high again and she has yet to finish in the top-two from Tier B. With three straight R2 exits in 2016, Coco Ho will look to Brazil for a rebound. - WSL / Kirstin Scholtz

Coco Ho (Projected 12.03 AHS / 26.12 FP) - This is the worst start Coco has had in her CT career, finishing even 13th for the first three contests, averaging 23.41 FP per event and not yet emerging as even second from Tier C. Although Ho made the QF at Rio last year, her 9.98 event AHS was the lowest among fellow 5th-placers Keely Andrew (10.81), Lakey Peterson (12.99) and Malia Manuel (12.63). With ownership percentage expected to split with Silvana Lima, risk simply won't outweigh reward potential.
Odds - 102:1 Silvana Lima (Projected 12.56 AHS / 67.3 FP) - Especially in bigger leagues, fading Silvana Lima will be a tough, but potentially game-changing call. She has, by a wide margin, the best projected line in Tier C, but she'll almost certainly be the most owned. Silvana only has a 3 Rounds per Event Average (REA) at beach breaks, with only a slight boost to 3.33 REA at home in Brazil. While it's an advantage on the men's side, home-court hasn't helped Lima; her Rio AHS is only 10.89 and she hasn't made it to the QF since a SF berth in 2011. It's an extremely tough call, and one that will ultimately depend the size of the league you most want to win.
Odds - 56:1 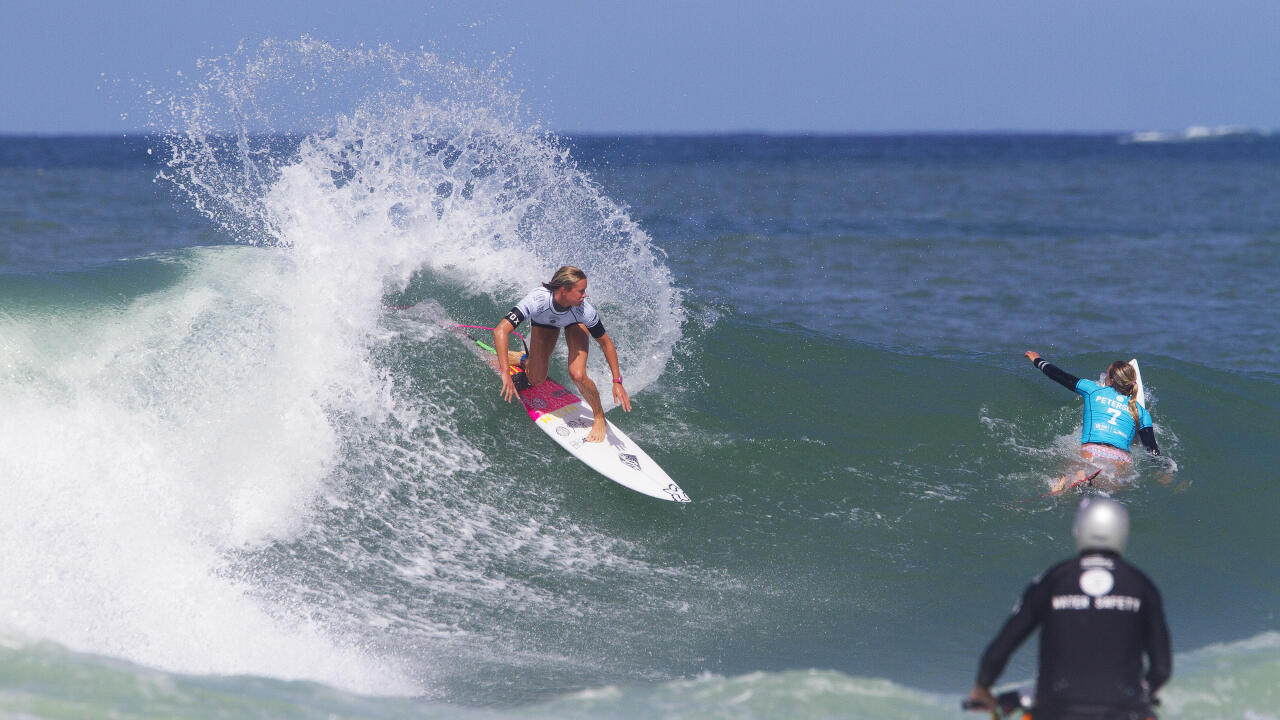 As an IR last year, Keely Andrew took out Coco Ho and Tyler Wright in R1 and made the QF. - WSL / Daniel Smorigo

Keely Andrew (Projected 11.53 AHS / 24.74 FP) - The best Sleeper option in Tier C is Keely Andrew, who made the QF last year as an IR. Her 10.81 event AHS was a small notch above average, but her success as 17th seed is a positive indication. Keely's 58.82 FP last year was more than Silvana Lima and Coco Ho, so depending on your Tier B picks (she's got some Round 1 potential conflict with Malia Manuel and Tatiana Weston-Webb), this may be the best place to take a chance. Very high risk, but all she needs to do is score more points than Lima and Ho. Tougher said than done, though.
Odds - 135:1

Hope that helps get your team ready for the Oi Rio Women's Pro, starting on 10 May. If you want to chat fantasy, come say hello on Twitter: @FantasyWSL and @RossWilliamsHI. Good luck and see you on the leaderboard!