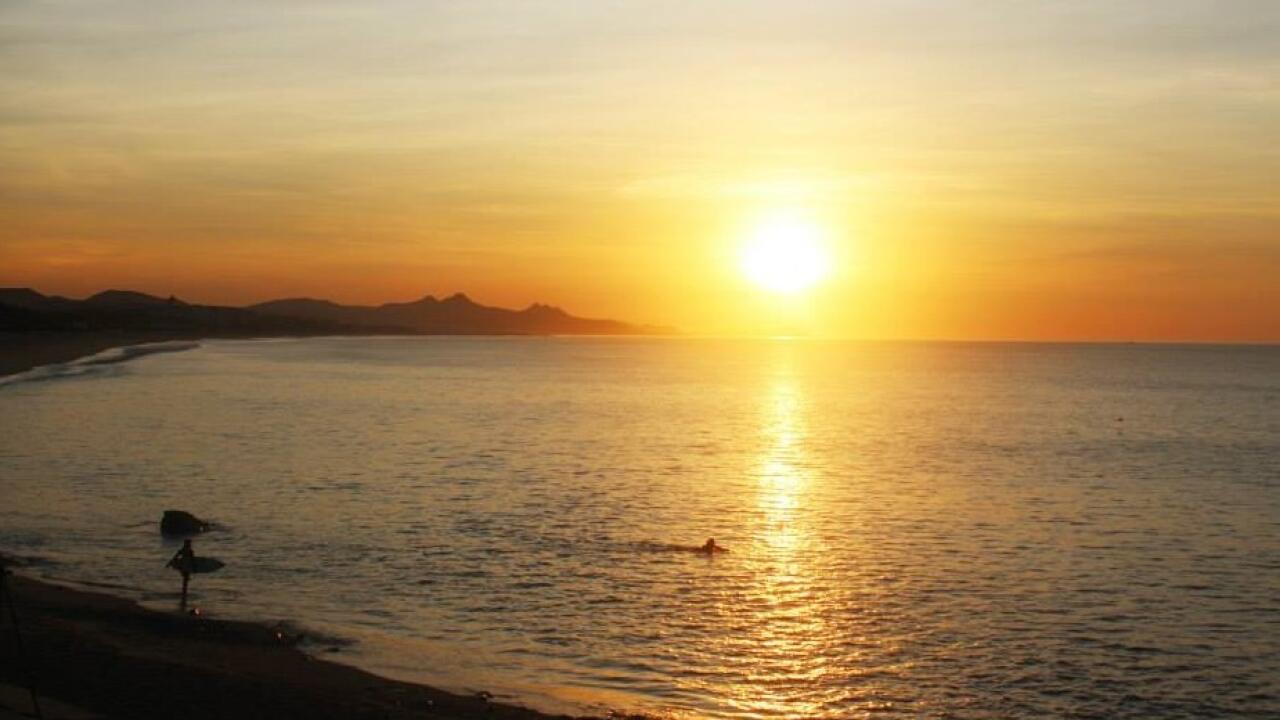 The Los Cabos Open of Surf offers incredible views of the beauty Costa Azul holds each morning. Competitors and spectators alike are treated to golden sunrises and sunsets each day on the pristine shores of Zippers. - WSL

The World Surf League (WSL) has arrived in San Jose Del Cabo, Mexico, once again for the Los Cabos Open of Surf featuring some of the world's best female surfers competing in the Women's Qualifying Series (QS) 6000. Also featuring the up-and-coming Men and Women Juniors vying for points in the North American region, this year's stage is set with promising talent on hand. Kanoa Igarashi and Isabella Nichols claimed last year's inaugural Pro Junior titles, but, with both of them aging out of the Junior Tour, a new champion will be crowned. The event window opens tomorrow, June 7 - 12 on the beautiful shores of Costa Azul at the pristine righthand pointbreak of Zippers.

Winning the second annual Women's QS6000 last year in decisive fashion, Nikki Van Dijk is back in Los Cabos looking to defend her title and stay atop the QS rankings. The 21-year-old didn't drop a single heat en route to her 2015 win - finding the recipe to success amidst an impressive field of competitors that included some of the Championship Tour's (CT) Top 10. One competitor looking to join that CT elite is last year's Women's Junior champion, Isabella Nichols. With the WSL's age requirement changing for Junior Tour competitors from 21-and-under to 18-and-under, Nichols is now a full-time QS campaigner and needs a good result here at the Los Cabos Open of Surf to get her season jump-started. However, the 18-year-old has her own outlook on the year and getting into Women's QS Top 6.

"Last year was my first time to Los Cabos and it was such an amazing place," Nichols told WSL in a recent interview. "I planned to target my focus on the QS event in Cabos and to focus on the QS tour in general for the year. Though it went the other way for me last year it was totally sweet both ways winning the Pro Junior here. I'm trying to take a different approach where I'm focusing on surfing my best and having fun." Nichols currently sits No.23 on the Women's QS and a win here in Los Cabos would earn her vital points toward a chance at qualifying for the CT. - WSL

Looking to add his name to the Los Cabos Open of Surf Junior Men's champions list, No.1 Seed Griffin Colapinto didn't get the result he was looking for last year. After a Round 3 elimination, the 17-year-old San Clemente native took that experience and now returns with confidence after his time grinding on the QS. This will be Colapinto's first Junior Tour event of the year in the North American region after missing the Ron Jon Vans Pro in March - and valuable points with it.

"I like coming in as the No. 1 seed because it gives me confidence," Colapinto said. "Last year I was still new to priority and learned that selecting the right two waves is critical. Even still, I need to improve my wave selection in heats under priority. But, I learn from each event, win or lose. I am bringing a carbon wrap and some short boards that feel pretty good right now." Colapinto has had plenty of experience at righthand pointbreaks in his career, both here at Zippers and most recently Martinique, that have prepped him for events like this one in Los Cabos. - WSL / Poullenot/Aquashot

Making her 2016 debut in the Women's Junior Tour, Caroline Marks will also be making her inaugural start at the Los Cabos Open of Surf when competition gets underway. Coming back from a serious injury where she broke her leg last winter, the 14-year-old picked up Roxy as a major sponsor and competed in the Snapper Rocks Trials event looking for a spot into the CT contest earlier this year. Despite falling short of that opportunity, Marks took that experience and, with the help of her support system and coach, will look to make an impact here at Zippers.

"I am really excited and I'm feeling super confident on my back hand - at the very least I expect to learn about a new place with great waves," Marks said. " I learned that when you compete at that level like the trials event, you cant afford to make any mistakes and having a coach like C.T. Taylor helps me focus on what is important. I feel 200 percent this year mainly because of my support system and amazing surfboards. It took a lot of work but my goal was to come back stronger and I'm fired up for this year." Marks showcased her powerful backhand at the Swatch Women's Pro Trestles CT event and will take that power to the lineup at Zippers this week. - WSL / Kirstin Scholtz

The call to begin the 2016 Los Cabos Open of Surf will be made at 8am tomorrow morning, starting with either the Women's QS6000, Men's, or Women's Pro Junior events. Go to worldsurfleague.com, or download the WSL App to see live scoring throughout the contest and for any additional information on the event check out loscabosopenofsurf.com.