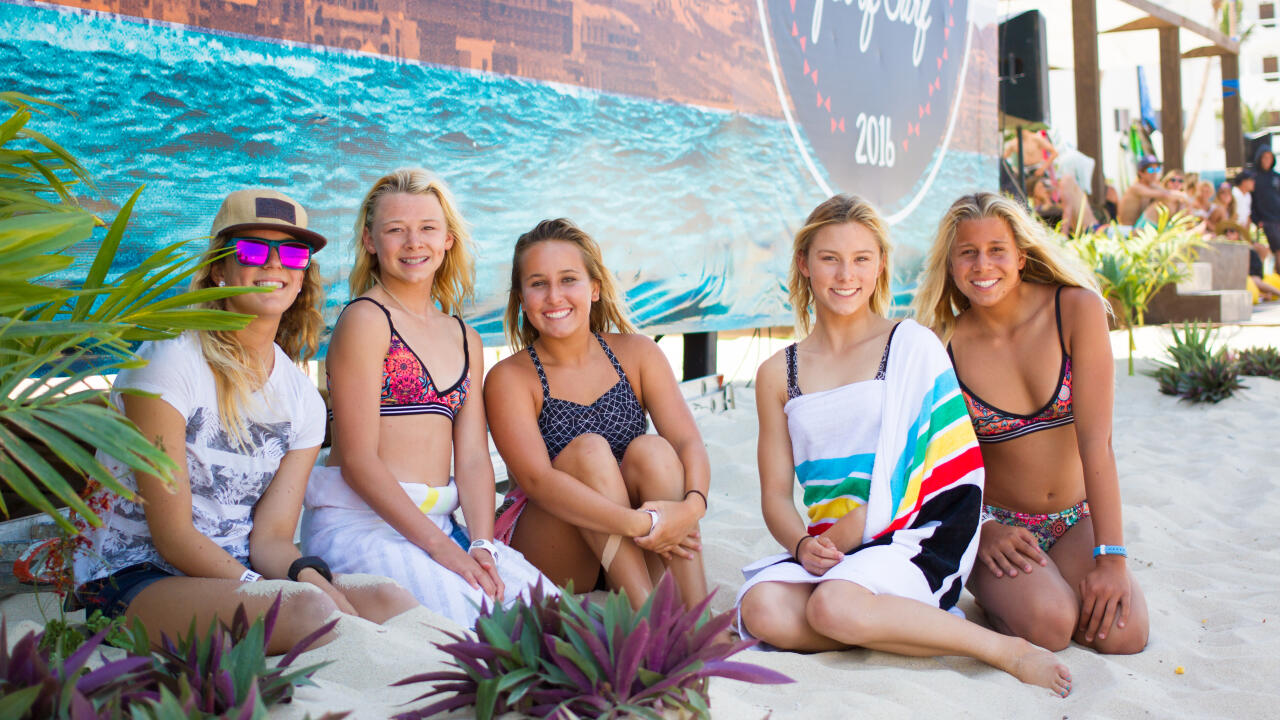 Some of the rising talent in the North America region have gathered on the shores of Costa Azul for the Los Cabos Open of Surf. (L to R: Tiare Thompson, Kirra Pinkerton, Hannah Blevins, Alyssa Spencer, and Rachel Presti). - WSL / Marenelmar

The World Surf League (WSL) continued into Day 2 action at the Los Cabos Open of Surf Junior Women's event and completed Round 2 - but not without some surprising early exits for Top Seeded surfers. The international field of competitors is proving great competition for the North America regional surfers who are vying for points toward a Junior Title. The conditions proved challenging once again as the Junior Women grinded through eight heats of competition to set up Round 3.

Sophie McCulloch (AUS) powered through yesterday's competition and earned another heat win with an excellent 8.33, the highest single-wave score of Round 2, as her last scoring ride. Holding onto a 6.40, McCulloch scored the highest heat total of Round 2 as well with a 14.73 and has her strategy set up with positioning being a key factor.

"I feel really good now that that heat is over - it was a super rough heat only catching three waves to get a first place finish," McCulloch said. "I just wanted to get another six to solidify the heat and win they called out an eight it was pure relief. I've found a good spot out there and where to be lined up with the beach but it's hard at the start when everyone's trying to get the inside and get pushed deep. We get caught wide and it closes down so I work to stay more where an open face will come through." Sophie McCulloch (AUS) earned a runner-up finish in Round 1, something she wasn't going to let happen in Round 2 as she found a Zippers gem for an 8.33. - WSL / MARENELMAR

Powering through a Zippers gem, Zoe McDougall (HAW) posted an 8.17 to start the trend of Top Seeds falling out of the contest - eliminating Caroline Marks (USA) and Valeria Peconi (MEX) in the process. Though she could only find a small 1.20 backup, the Hawaiian used her priority in the proper manner and kept Marks off a wave toward the end of the heat - experience she will need at the Women's QS6000 level when that contest gets underway.

"My plan was just to be patient with that wave and try not to be antsy so it paid off big time when that one came through," McDougall said. "I was trying to back it up the whole heat but kept scoring 1s on the inside just trying to get something since I was in fourth priority for most of that heat. When I got priority I just tried to keep Caroline off the wave since she only needed a four and I know she can get that on anything. I really hate sitting on people, it's my least favorite thing to do, but sometimes you just have to do it when it comes down to a heat like that." McDougall hails from the island of Oahu but takes advantage of North America Junior Tour events when she's competing in the Women's QS. - WSL / MARENELMAR

It was a tough day for the Top Seeds trying to earn points in their home region of North America as international surfers continued to take over the lineup. But, a handful remain intact hoping to come away with a win and get jump in the Junior Tour ratings. Kirra Pinkerton (USA) fell victim to the string of upsets, but still has a lot of knowledge to gain as a Junior at age 13. - WSL / Marenelmar

One of those surfers is Meah Collins (USA), who knows that these contests are nothing to be taken for granted.

"I'm just trying to make sure I'm on the right ones," Collins said. "It's so easy to go on the wrong ones but when you have priority and use it properly that's what wins you heats when the waves are like this. I've just been watching all the top seeds go down and it just shows you how challenging it is and anything can happen out here. I come into each competition never underestimating my competitors because the sport of surfing is so crazy. You can go through an entire heat without catching a wave, which I've done before so you just have to be ready for anything." Currently ranked tied for No.5 on the North America Junior Tour, Collins is guaranteed to gain an edge in the rankings as both Kirra Pinkerton (USA) and Malia Osterkamp (USA) have been eliminated. - WSL / MARENELMAR