Big Scores; Up and Comers Debut
2:57
All the action from opening day of the Vans Pro Men's QS3,000 and Vans Pro Junior

Coming into the 1st Street Jetty at Virginia Beach, Va., one of the most important things for the Men's Qualifying Series (QS) competitors to consider is their quiver. Dealing with challenging conditions throughout the event window is a norm at the Vans Pro and with vital points on the line, every detail must be taken into account. Two-foot windswell was on offer for opening day and the competitors rose to the occasion, managing to post near-excellent and excellent scores (where "excellent" is an 8.00 or above, 10.00 being a perfect score) throughout Round One.

Australian Harrison Martin lit up what the Jetty had to offer and posted an impressive 15.60 (out of a possible 20) for the day's highest heat total. Martin looked eager to get his first Vans Pro campaign underway and capitalize on anything that came his way. The Sydney native knows how important these events are and will look for a big result on seemingly proper equipment. Fellow Australian Reef Heazlewood joins Martin in Round 2 to try and capitalize on some key points. - WSL / John W. Ferguson

"I was just really fortunate to get two waves that doubled up properly and stood up the whole way to shore," Martin said. "To get from out the back to shore is everything. It's almost a better than what it looks, you're still getting some push but this Epoxy board definitely helps -- I don't know how I'd do on a normal shortboard out here.

"If you can't connect from A to B you won't get much over a five. You really need the points here now that we're starting to see what the cutoff has been set at. It's all about trying to get into that top 100 to earn a spot into the higher level events for next year. So this event is really important to start getting your ranking going."

Micha Cantor found the gem of the day and went to work on it, posting an 8.33 to earn the highest single-scoring wave of Round One. The South Carolinian is all too familiar to these types of conditions and put that experience to use in an international heat. Cantor's fate at the Vans Pro fell from his hands as Bo Raynor posted a win in final seconds of the Tautog's Pro which determined the final wildcard -- but found his way in as an alternate.

"I wasn't even supposed to be in this event so I'm stoked just to get a chance to surf here now," Cantor said. "My focus is just on winning at least one of these events since I'm also in the Junior event, but I really want to do well in both contests. If I walked up to the beach back home and saw this I'd think it was fun and would get out there anyway. I'm just soaking this all in and want to do my best here." 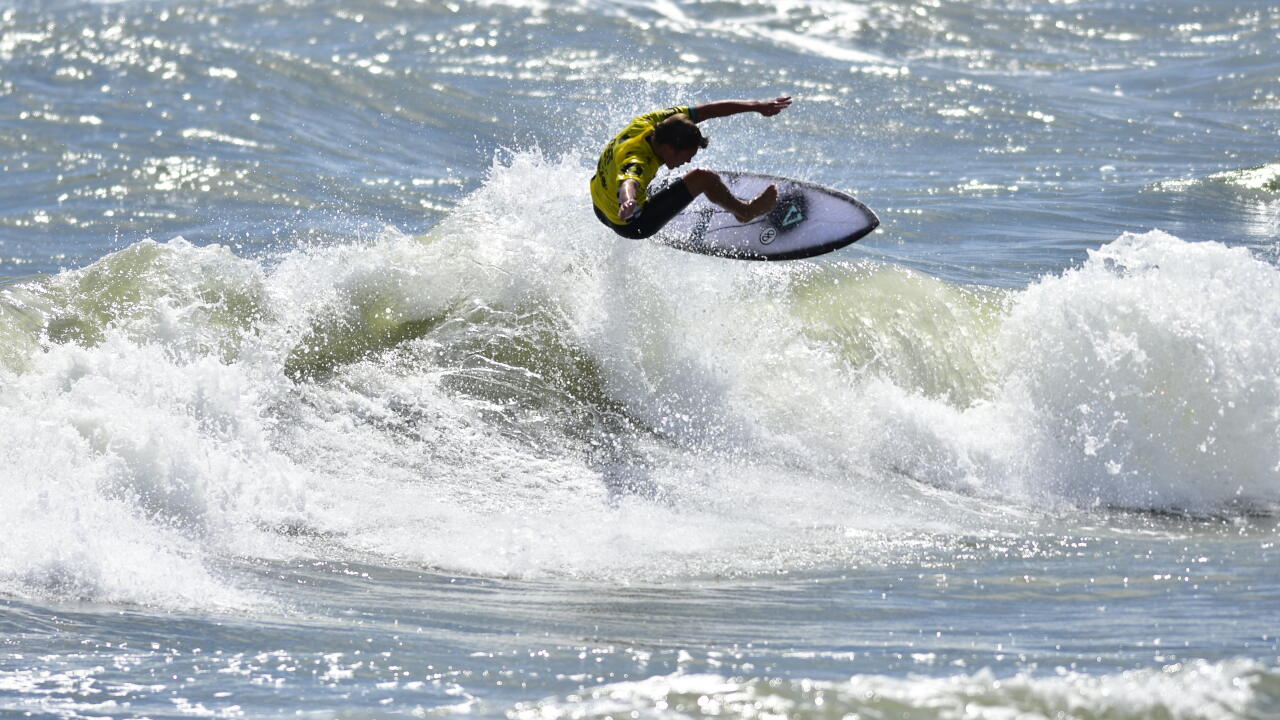 Cantor has his ambitions set high at this event and will have a lot of water to cover to do so -- something he seems to have down. - WSL / John W. Ferguson

"It ended up being pretty fun out there being on the right ones," Cantor added. "This is actually the first time I'm riding this board and absolutely loving it. It's so light and epoxy to make it through these sections. On another board I feel like I would be losing speed but with this, I can feel more momentum coming out of turns and go into that next section faster."

Hailing from Florianopolis, Brazil, Mateus Herdy felt at home as well surfing in Virginia Beach as it reminds him of a small day at his home break of Joaquina Beach. Herdy made his debut at his first-ever Vans Pro one to remember with a heat win and posting a 14.03. "I'm feeling good with what's out there," Herdy said. "It's a bit like back home so I'm always training on these types of waves. It's not typically this small when there's waves but when the wind is onshore it's very similar and I prepare for every type of condition. It's my first time on the East Coast and I'm so stoked to be here after doing a surf trip from San Francisco down to Los Angeles in preparation for this one."

Jacob Willcox, from Australia, finds himself on the shores of Virginia Beach for the first time, and came in terrific form. Competing in the Samsung Galaxy Men's Championship Tour (CT) earlier this year at his local Margaret River break, Willcox had a taste of the dream tour and is looking to make it there on his own right someday. But he must tackle breaks like the 1st Street Jetty in order to find himself on the destinations included on tour. "I've surfed some bigger events but never in waves like this so it's a whole new ball park," Willcox said. "You just have to surf as well as you can and everyone can put some scores up here knowing how to surf in these conditions. Coming from Western Australia we never get waves like this back home, which is good for me, but not when I come to surf this type of contest. It definitely gives you some confidence when you get the opportunity to surf against the CT guys, but now it's a whole new competition with a bunch of good surfers. All of these experiences are good and you just have to take it as it comes and just do your own thing."

Jake Kelley is back on the QS grind for a short stint after competing in Acapulco earlier last month and now winning heats in Virginia Beach. Posting a solid 13.83 heat total in tough, early morning conditions, Kelley had a magic board under his feet that propelled him through the flatter sections and provided amplified scoring opportunity.

"Surprisingly there's a couple little wedges when you get the right wave that stand up more than you expect," Kelley said. "The board I went with was really good. I wasn't even going to ride it to start with, but saw it was soft out there so I went with the groveler and it worked out great. I've been coming here for four or five years now so I always come prepared with the smaller wave boards." Blurring through difficult sections on his choice equipment, Kelley is through to Round Two with plenty of steam. - WSL / John W. Ferguson

"This is the first contest leading up to a string of them so I'll be on the road for a little back now," Kelley added. "I'll go to Europe after this, straight to Azores as an alternate and then go around Portugal for more filming. There's not that many contests in North America so this is a huge opportunity for everyone to get some points in the region. Aside from the US Open, this is the biggest one so it's a super important one and I'm excited to get things going here."