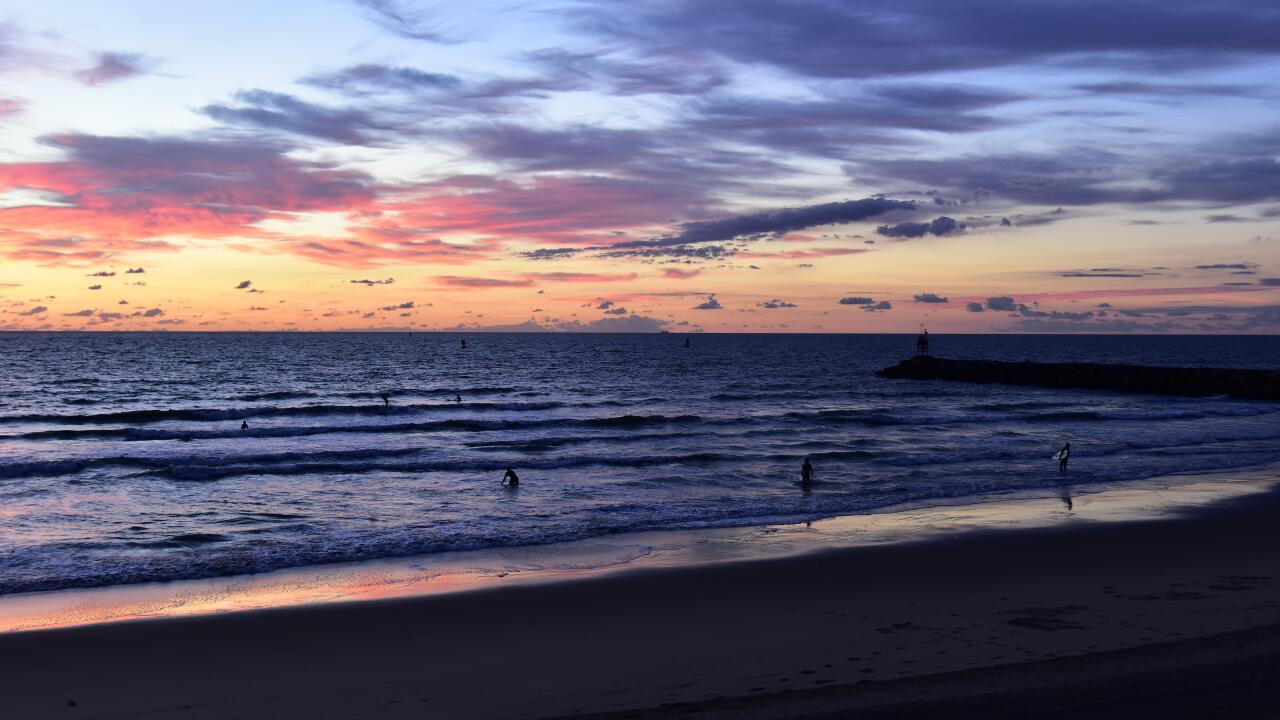 An early call had surfers ready to get their 2016 Vans Pro campaigns underway in tough conditions. - WSL / John W. Ferguson

After a full day of Vans Pro Men's QS3,000 action, the Vans Pro Junior got their competition underway and showed their prowess in the conditions on offer. Marking the start of their fourth stop on the North America Junior Tour series and only three remaining, each heat has its significance for these young talents. The top four spots secure their place in the World Junior Championships and that is the ultimate endgame for a handful of competitors.

Leading that charge atop the rankings and coming out with a strong opening performance, Kei Kobayashi (USA) with an 8.50 and highest Junior heat total, 14.67. Following his QS heat win, Kobayashi took that momentum into the Junior event and continued his rhythm with the ocean. The 17-year-old knows the importance of each passing heat to maintain his No. 1 ranking on the North America Junior Tour. Giving credit to Matt Biolos and Lost... on rushing his board, it seemed to work wonders for Kobayashi gliding through sections. - WSL / Andrew Nichols

"I thought my first wave was going to be a little higher but that motivated me to open up a lot more which I did on the next wave and got that 8.50," Kobayashi said. "It's a little soft still but it's the same exact copy of my board that I won Florida on and just feels really good. Waves are pretty small but stoked to find a couple. To get in the Top 4 is insanely hard and it'd be great to keep that No. 1 seed all the way through. But I'm just keeping my head in it and these conditions suit my surfing really well so I'm just excited to move forward and hopefully make some heats."

With both Jake Marshall (USA) and Griffin Colapinto (USA) through to Round 2, Kobayashi will have plenty to surf for in coming days. Though Colapinto is focused on the QS more than the Junior event, the time spent in the water will benefit the 18-year-old and provide an opportunity to compete at the World Junior Championships. Jake Marshall grinded through his opening heat and will look to build on that momentum in Round 2. - WSL / John W. Ferguson

Ryland Rubens (USA) may not be in a title hunt but he's putting in solid results in his time as a Junior. Clinching a Semifinal apperance at the Vans US Open of Surfing and fourth-place out of region at the Pipe Pro Junior, Rubens is on a quick learning curve with the competitors around him.

"Doing these Junior events are always fun and a really good challenge," Rubens said. "Hopefully the waves get a little better but I'll be stoked to make a few more heats. Coming here a few years ago for the first time I didn't realize how big of an event this was with a lot of people coming down to watch so it's pretty cool. To get the experience out here is great." Rubens will face off with the in-form Griffin and Crosby Colapinto (USA) in Round 2. - WSL / John W. Ferguson

Looking to gain experience of his own and, in the process, disrupt the North America ongoings, Victor Mendes (BRA) took his winning form from the QS to the Juniors to complete his day of competition. Posting a solid 7.00 in the tough conditions, Mendes looked comfortable in the turbulent afternoon lineup and will get as much time in the water as he can.

"It was tough out there but I felt really good after doing well earlier today in the QS heat," Mendes said. "My main focus is the QS since that's where I can earn points and start building a seed, but with the Juniors it's a great chance to surf against these guys. Competing against some of my friends and rippers like Nick and Jake [Marshall], and Kei, it's super fun to know I'll see them on the QS one day. I'm really looking forward to getting some heats under my belt here and make a run at both these events." Simon Hetrick (USA) will join Mendes and Wil Reid (USA) in Round 2 with a runner-up behind Yuji Mori (JPN). - WSL / John W. Ferguson

Though he lost in the QS main event earlier in the morning, Wil Reid (USA) found a 7.00 of his own and earned a spot into Round 2 of the Juniors behind [Kade Matson](/athletes/8905/kade-matson (USA). This is Reid's last year as a Junior and he's hoping to enjoy it before making his dream of becoming a top QS competitor a reality.

"I haven't really gotten a good result this year so to get one here would be great," Reid said. "It was a little unnerving coming into that Junior heat after losing my QS heat. The last thing I wanted was to be out of both the QS and Junior on the first day. I'm just enjoying evertyhing though, trying to get a few QS events in and start getting that together -- my ultimate goal would be to make it into the QS10,000s within the next few years so I'll get as much experience as I can at this level and just have fun."