The Vans Pro Junior has shaped up for another international final day of competition with Japanese and Brazilian contingent joining the North American region surfers vying for points within their home region.

Griffin Colapinto had to deal with two superheats today between his Men's QS3,000 bout and then moving into the Junior Semifinals with current No. 1 Kei Kobayashi and Vans US Open runner-up [Jake Marshall](/athletes/3122/jake-marshall -- along with Brazilian talent Victor Mendes. Blasting an 8.27 and leaving the battle for second a close one that Kobayashi was able to come away with in the dying seconds, Colapinto will look to cap off this event with another massive win.

"That first heat of the morning just eliminated all my nerves being pretty bummed so I just wanted to go out and surf -- I was pretty riled up and just needed to get out there," Colapinto said. "It ended up being a pretty fun heat and it was great to get a quick start to set myself up. It's been super good for my rhythm with all the heats, the more the better, and I like to make as many as I can. I'm just psyched to make it to another finals day of a Junior event so hopefully get some more big points." Turning his heat in the final seconds, Kei Kobayashi retained his spot at No.1 making into the Semifinals alongside No. 2 Nolan Ropoza and No. 3 Colapinto. - WSL / John W. Ferguson

Nolan Rapoza is on track to keeping his No. 2 spot in the Junior Tour rankings with a Semifinal appearance, but he knows the hard work is far from done.

"I'm stoked on that one after being pretty nervous watching the waves in the last few QS heats but we got some fun ones coming through for that Quarterfinal. Everyone's really good and it just comes down to who can find the best waves in these tricky conditions. That's been my whole goal is to be patient and wait for good waves, but not wait as long as I did in the QS heat because that ended up being why I lost." Rapoza is hungry for his first Junior Tour win which makes him a threat at every event. - WSL / John W. Ferguson

"Semifinal heats are the most stressful of the event. Once you're in the Final, you're there and you know you can do it whereas the Semis is a place where big contenders go down -- and I don't want that to happen so I'm going to do my best. It all depends on how the waves are going to be tomorrow as to what I make my strategy but I'll be prepared for whatever comes."

Part of the international contingent posting a threat to North American region competitors is Yuji Nishi. Currently sitting at No. 3 in his home region, Nishi is relishing the opportunity to compete abroad and gain as much experience as he can.

"I'm just so stoked to make it into a Semifinal here in the tough conditions. I just tried to find the good ones out there and when they came perform as well as I could -- getting that 7.50 felt great. Coming to this event and competing against these guys I just want to do really well and show that I can win against them. Back home I have a really barreling wave so it's difficult to prepare for this type of break but I try to be prepared for any wave that comes with practice around the competition." Nishi has been riding nearly every wave to the sand to capitalize on maximum points and it's been paying dividends. - WSL / John W. Ferguson

Samuel Pupo joins Nishi as an out of region competitor looking for experience in as many heats as he can -- and he's doing quite well. Winning both his Men's QS,3000 Round Four heat and Junior Quarterfinal battle over event standout Tommy Coleman and Che Allan.

"When I make those Junior heats it really builds my confidence into the QS and my boards feel like they're flying out there. Airs were the best thing I could do out there without priority and getting those waves to win heats. I'd really like to get my rail game stronger as I continue to grow as a surfer, especially heading into the QS at a young age. The experience I can get at the Junior level with these guys I'll be surfing against in the future is so helpful and I can only learn from it moving forward." 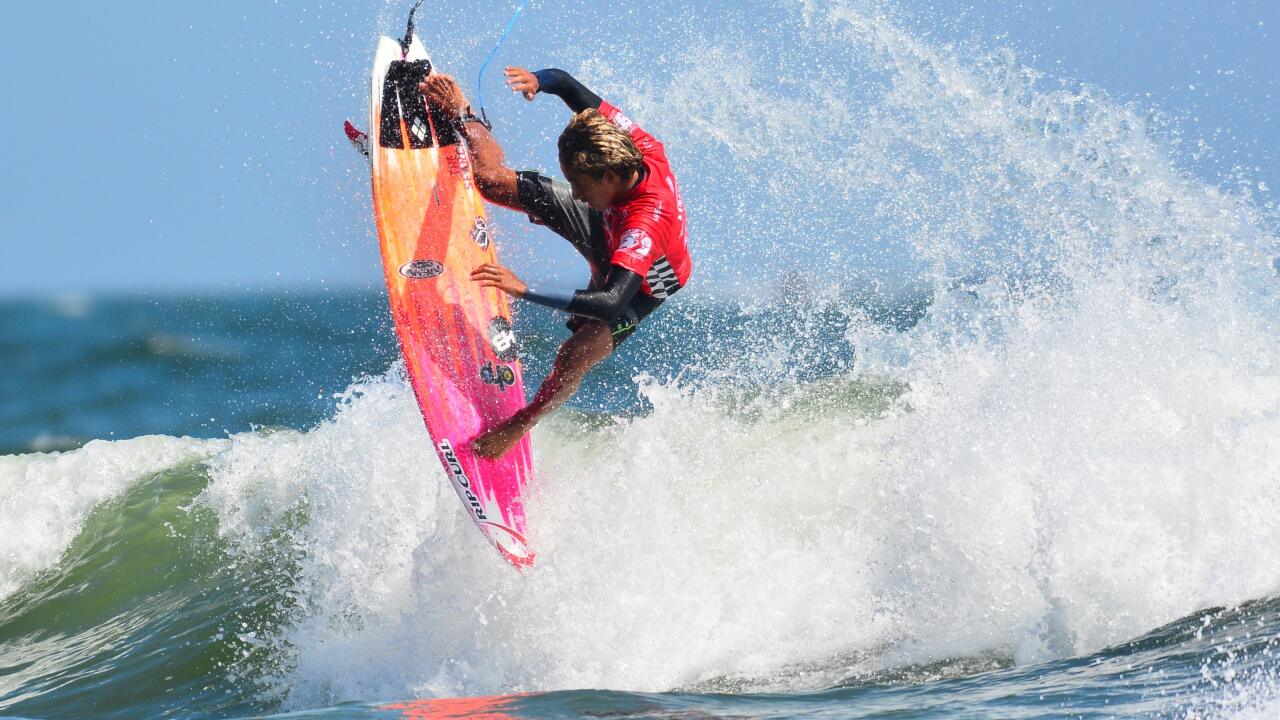 Pupo's boards have been flying with ease -- and riding out with him still attached on nearly every attempt. - WSL / John W. Ferguson