The second day of the event window came to a close with opening action of the Essential Costa Rica Open Pro Women's QS3,000. - WSL / Andrew Nichols

The women began their charge into Round 1 action at the Essential Costa Rica Open Pro QS3,000 with plenty of surprises in store. Esterillos Este still continued to provide plenty of scoring potential following a full day of men's competition -- something that a few of the female athletes took full advantage of.

Per-fec-tion: the action or process of improving something until it is faultless or as faultless as possible.

Perfect 10s are the sought after goal of every surfer in competition and it was 13-year-old Kirra Pinkerton who displayed this definition to its core. Finding one of the remaining gems on offer, Pinkerton went to her backhand attack for a critical opening turn that paved the way for a powerful finish -- utilizing every section of the wave that gave her multiple big maneuvers. Pinkerton has already claimed a win over Coco Ho in El Salvador earlier this year and there's plenty of talent on hand for her to match up against here in Costa Rica. - WSL / Johan Pacheco

"It was so fun, I actually didn't even see that wave since I was paddling inwards but as soon as I turned and went for it -- it was just a perfect wave," Pinkerton said. "I wanted to just surf it to its potential. I knew to make a heat you needed at least two sixes so that was amazing. Getting those first two scores felt great and I just wanted to keep building so that freed me up to go a bit bigger -- it was really exhilarating."

Pinkerton will now have a chance to lock in her bid for the North America QS title, taking on current No. 1 Meah Collins, alongside Dominic Barona and Bethany Zelasko.

Fellow California-native and 13-year-old Alyssa Spencer went to town on a left of her own, but the goofy-footer relished her forehand opportunity and posted a near-perfect 9.43 in the last heat of Round 1 -- notching a 16.20 heat total. In her first year as a Junior and QS competitor, Spencer has made a name for herself and is soaking up all the knowledge she can en route to solid results. All smiles and plenty of contest in front of her, she now looks at a big Round 2 match-up with former CT competitor Paige Hareb, Costa Rican threat Leilani McGonagle, and QS newcomer Kayla Durden. Spencer also leads the North America Junior Tour in her first year of competing and has carried that success over to QS heat wins. - WSL / Johan Pacheco

Rewinding back to the opening heat of Round 1, Bailey Nagy came out of the gates firing with a Round 1 Heat 1 win. Nagy posted a 7.67 and 6.33 to end trials winner Camila Summers and North America title hopeful Autumn Hay's runs in Esterillos Este.

"It's pretty fun here, I've been to Costa a few times but never this wave so I'm excited to learn it," Nagy said. "I haven't done very well in the beginning of the year and just looking for some points. It'd be great to win or at least Final to maximize. It's a typical beachbreak, but the tide changes are so different you have to be prepared for all of it and I'm really stoked to do well here." Nagy currently sits at No. 61 on the QS and is looking for a big result to boost herself up the QS ladder. - WSL / Johan Pacheco

But, Tessa Thyssen staked her claim for one of the standouts of Round 1 with an excellent 8.17 and earning a 14.67 heat total. Thyssen got busy early, posting a 6.50 on her first wave, and continued to try and find something of more substance. New to the lineup of Esterillos Este, the Saint Marks-native was also not on her own equipment -- adding some weight on her shoulders heading in.

"It was pretty difficult with so many peaks to choose from and wasn't ready what to expect since it was my first time surfing this wave today," Thyssen said. "I was trying to build my scores throughout that heat and find the right spot which ended up working out. Really just wanted to not fall on that wave and surf the way I know -- I'm really happy it went that way." 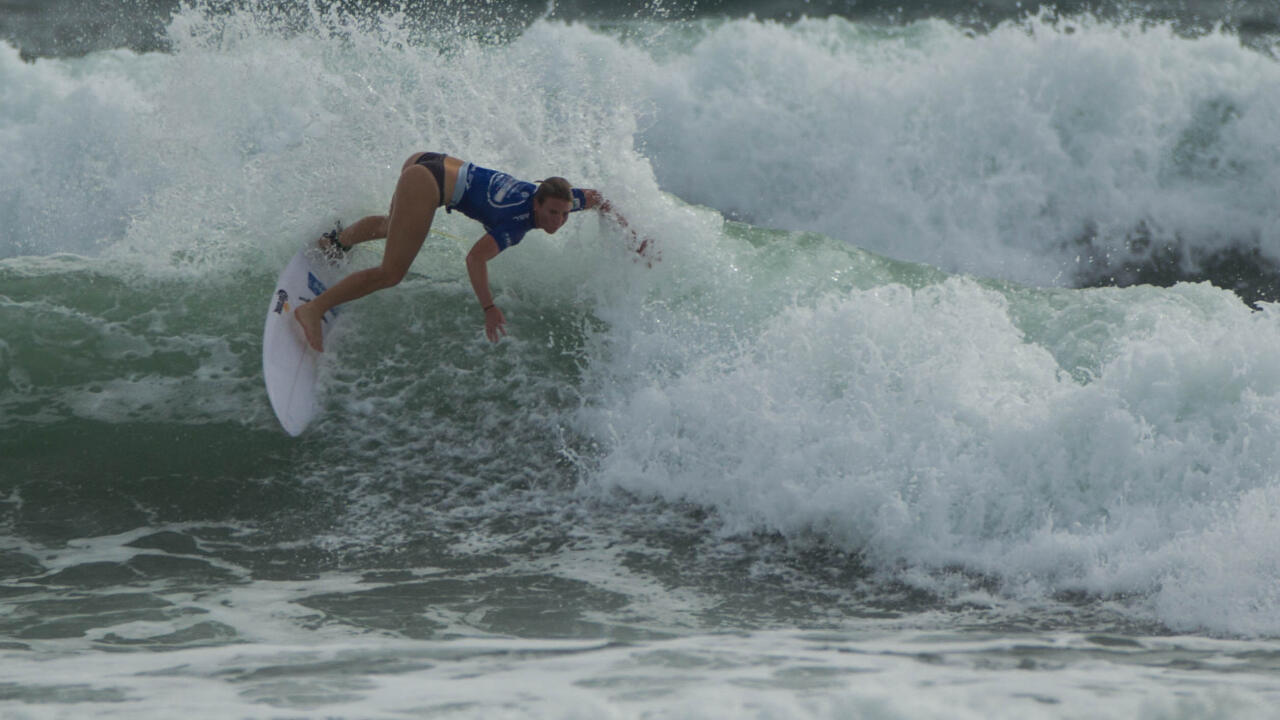 Thyssen was on the wrong end of board delivery upon arriving in Costa Rica and surfed a loaner for her Round 1 heat. - WSL / Johan Pacheco Copyright

Peruvian Melanie Giunta found some solid numbers of her own and posted a 7.33 en route to her Round 1 victory. It's Giunta's first time to Esterillos and knows there's much to learn about the wave despite being to Costa Rica in the past. But, with her compatriots around her, she feels right at home.

"It feels really good to get those two waves right away since I'm always really nervous before a first heat at any event," Giunta said. "I just wanted to keep improving my scores but couldn't find the right ones to do that after a quick start. Hopefully I can find those improvements in the next heat. It's really great having a big crew down here with all the Peruvians cheering each other on -- it makes me want to surf better." Giunta is looking for her first big result of 2016 here in Costa Rica -- earning a Quarterfinal appearance in Morocco before heading to Latin America. - WSL / Johan Pacheco

Tune in live at 8:00 a.m. local time for the webcast to see if women's Round 2 or men's Round 4 will begin the third day of the Essential Costa Rica Open Pro QS3,000 window.