Riyue Bay in Wanning on the Chinese Island of Hainan. - WSL

Tomorrow will see the first day of the waiting period for the 2016 WSL Jeep World Longboard Championships (WLC) presented by Wanning. The event is in its sixth straight year of running at the beautiful long lefthander of Riyue Bay on the East Coast of Hainan Island, China.

This contest is the single event to crown the WSL Men's and Women's World Longboard Champions for 2016.

One year on from taking out his second World Longboard Title, Peruvian Piccolo Clemente has returned to China to pick up where he left off. Having the long lefts that Peru is famous for in his backyard, Clemente feels he has had adequate training in the lead up to the 2016 event. 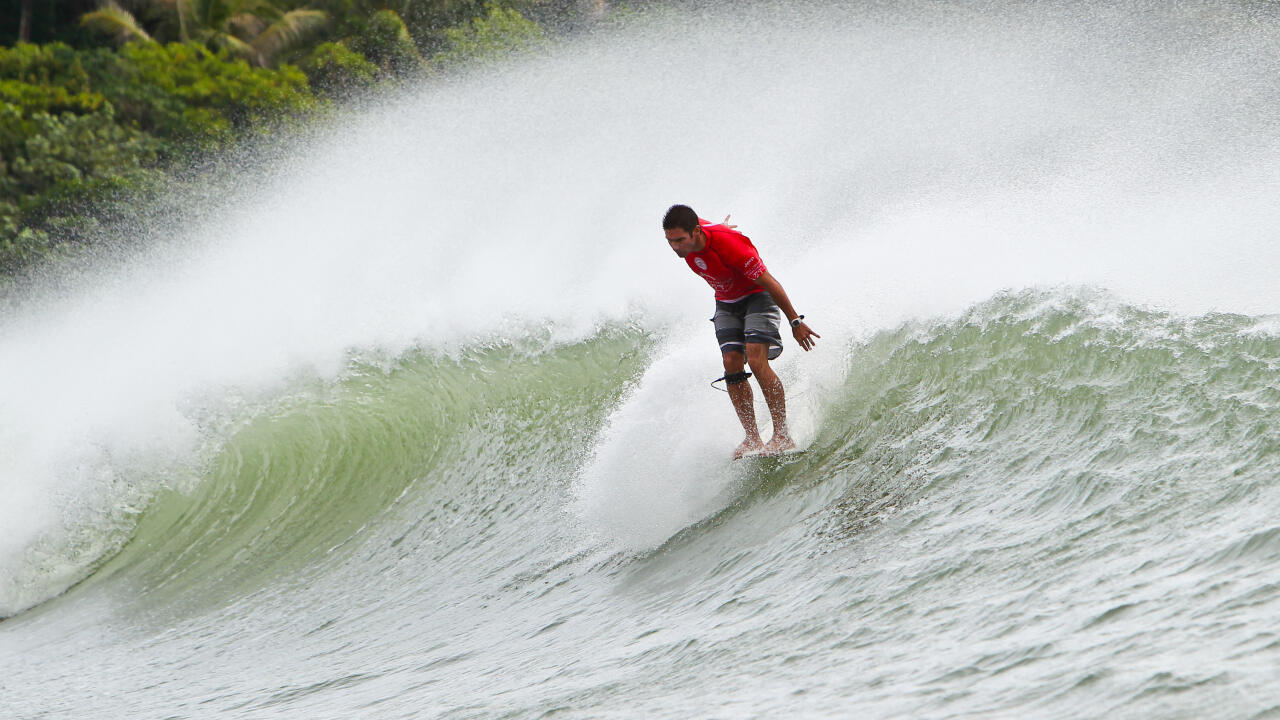 "I'm really happy to be back in China," Clemente said. "I have so many fond memories from here and it is the place of some of my greatest achievements in life. I have had a couple of days here to warm up but I have been surfing on long lefts at home and feel I am ready. The forecast for the event is looking really fun so I am really pumped up for the contest to start."

After injury forced two-time World Longboard Champion Kelia Moniz to withdraw form the 2015 event -- the Hawaiian is motivated as ever to get that cup back in her hands in 2016. "I'm so pumped, just so excited to be back in China," Moniz said. "It was a bummer missing last year as I've been apart of it for so long, but it was also really nice to be able to be home in Hawaii and just have family time. I usually travel to Hainan with my mum and some of my best friends so I'm looking forward to hanging surfing and just chilling with everyone."

Born of Hawaiian surfing royalty, it is no surprise that at the age of 22 Moniz already has Two World Longboard Titles to her name. However, to her surfing and longboarding in particular has a more meaningful connection to her life than just silverware and bragging-rights. "I love longboarding, it is beautiful and extremely relatable to people who don't know much about surfing," Moniz continued. "I believe there is huge potential for longboarding to be bigger than it is. There is so much talent in the longboarding world and I think Longboarders need to be rewarded more for what they do. The longboard events are so interesting because everyone has such a different approach to riding a longboard; unlike the shoartboard tour, it's more unique."

With locals saying that 2016 has had one of the best starts to the surfing season in years, the swell outlook is looking promising for the first few days of competition. Event director Stephen Robertson is more than happy about what the maps are suggesting. Lets hope Riyue Bay can turn some of this on for the coming waiting period. - WSL

"The waves at Riyue Bay have been pumping for the last week and there is no sign of them slowing down too much. The wave holds its shape across all tides and swell sizes and is a perfect wave for longboarding. We're expecting all competitors to get an opportunity to show their skills and entertain everyone on the beach and watching on the live webcast."

In the lead up to the main event, the WSL assists locals in running the Asia Cup event at Riyue Bay. The event is an initiative between the Chinese Government and the WSL to help foster relationships between surfers from China, Taiwan, Japan, Indonesia and the Philippines. It also helps to develop the competitive surfing skills of surfers from these countries. The longboard division of the Asia Cup will decide the wildcards who will surf in the World Longboard Championship.