The first time I saw 16-year-old Finn McGill surf was in Samoa. It was a couple of years ago and Finn was one of five groms on the trip, but out of a group of young surfers you can always tell which one is from Hawaii. Sure, they're more used to waves with push and juice, but it's the way they handle that power that sets them apart. Finn wasn't just "going for it" on the meatier set waves -- he was harnessing that juice. Indeed, I watched the tow-headed blonde sit deep, stalk sets and hook into slabby righthanders under the lip with a flare and confidence well beyond his years.

Finn Steps It Up
2:43
The North Shore local lucks into a last-minute tube at Backdoor to break through the Semifinals in the Pipe Trials.

Two and a half years later, surrounded by a few hundred bystanders on the beach at Pipeline, I'm watching that same kid pulling into Backdoor growers, getting spat out with a jersey on at the Men's Pipe Invitational. I also watched multiple folks not in the know turn to their friend and mumble, "Who is this kid again?"

That "kid" ended up winning the entire comp (a frighteningly stacked one, at that) and a slot in the Billabong Pipe Masters. But in case any of those folks are reading, I'll tell you who Finn is.

Finnegan Thunders McGill -- yes, his actual name -- was born in California but moved to the North Shore when he was three. Finn Thunders, back at it again mid-Pipe Invitational. - WSL / Poullenot/Aquashot

"My dad's favorite band was the New York Dolls and a guy named Johnny Thunders was a famous guitarist in the band," said Finn, of his brilliant middle name. "My dad loved it, so that's how my middle name came through. I think my dad was a little bit of a punk rocker back in the day."

These days, Finn's dad is a photographer and his mother produces photo shoots and commercials. His older sister, Dax, is also an amazing surfer who competes in Hawaii and around the world.

"My parents taught me to have fun with life and not take things too seriously. So that's what I try to do."

How Finn Defeated 32 Pipe Specialists
1:48
Finn McGill, one of the trials' youngest competitors, and Gavin Beschen, perhaps its oldest, swept the field.

As far as how Finn's gotten to the point of putting on a show in the Pipe trials in front of, well, the entire world, he blames his crew.

"Wyatt McHale, Barron Mamiya, Makana Pang, Kalani Rivero, Noah Beschen; all of us surf together a whole lot," McGill said. "We really push each other hard in the water, which I think is really important. Whether it's Pipe, Backdoor, Off The Wall, Rockies, we always meet together and our level is pretty similar.

"I definitely look up to John John the most though. Big waves, small waves, he surfs everything well. If anything, I want to be well-rounded like that." And as far as how this year's gone for Finn, he's well on his way. Earlier this year, he got second place in the Rangiroa Pro and a month ago, placed fourth in the HIC Sunset Pro, taking down a field of heavy hitters in his path.

These results got Finn into the 2016 Vans Triple Crown of Surfing, where he made a round at Haleiwa and two rounds at Sunset. It also built his seed for next year so that he can even enter some 10K and 6K events on the 2017 QS tour.

Finn Thunders at the Vans World Cup of Surfing.
1:39
Colapinto, McGill, and Muniz give a glimpse into the future, posting the heat of the day at Sunset.

And then, of course, here I am watching Finn win the entire Pipe Invitational, taking out 32 guys, most of whom could beat half the surfers on the CT at Pipe on any given day. Guys like Jamie O'Brien, Jack Robinson and Reef McIntosh. Indeed, Finn was hooking in under the lip -- a more mature version of what I saw him do in Samoa some years back -- advancing past them all.

When Round One of the Pipe Masters comes around it should be interesting to see how Finn fares with his shiny, new spot among the world's best. But with just two other surfers out in the water with him, I wouldn't be surprised to see something special. 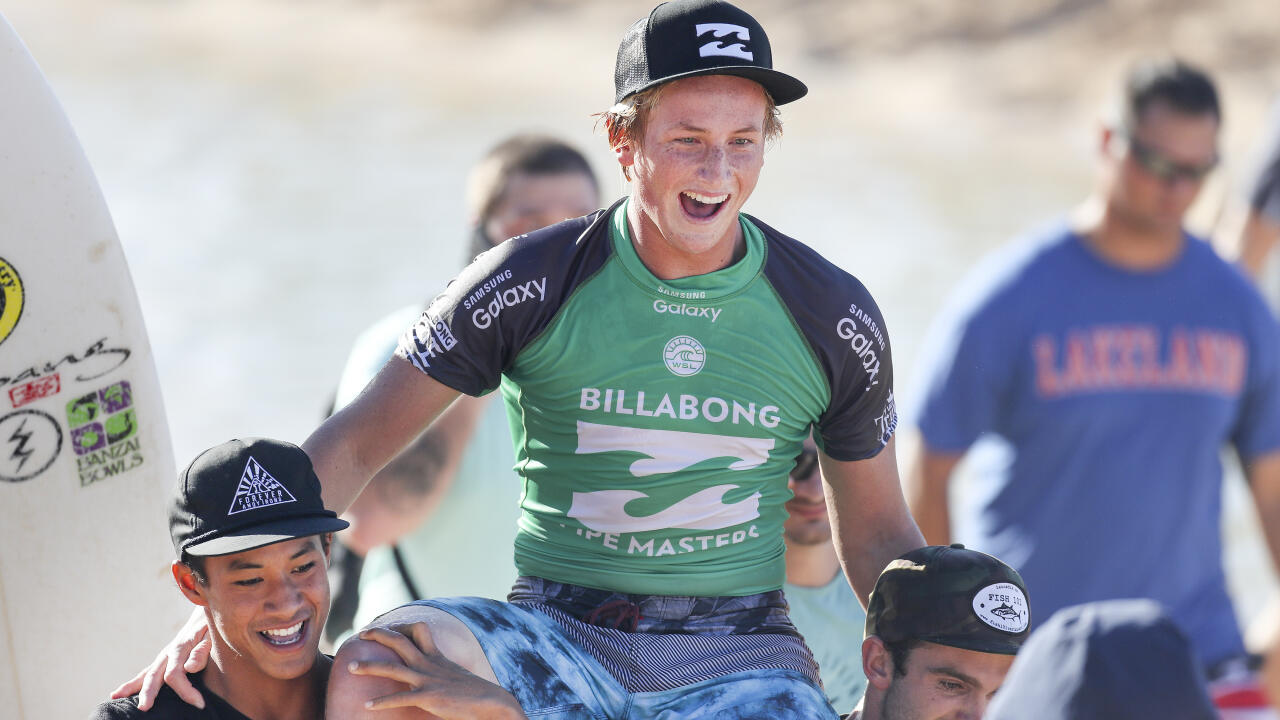 Finn McGill, on top of the world. - WSL / Damien Poullenot

Finn McGill, one of the trials' youngest competitors, and Gavin Beschen, perhaps its oldest, swept the field.

The young gun and the seasoned surfer win the Trials to earn spots in the Billabong Pipeline Masters.

The North Shore local lucks into a last-minute tube at Backdoor to break through the Semifinals in the Pipe Trials.