Tia Blanco has been quietly grinding away on the Qualifying Series (QS) for a few years, climbing the ranks and gunning to break into the top tier. She just finished the Shoe City Pro QS1,000 in Huntington Beach, Calif., putting her at No. 5 on the rankings to kick off the new season. But surfing is far from the 19-year-old's only pursuit: Her passion for yoga and veganism are close rivals, and she's built a solid social following for both her surf profile and her vegan kitchen guide, too. At November's Sydney Women's International Pro, the final QS contest of the season, Blanco finished in fifth place. She took down a handful of CT surfers along the way. - WSL / Bennett

Just after Blanco's season opener in Huntington, she shared some of her secrets to going vegan -- from why she did it to how she sticks with her program.

"I went vegan for the animals," said Blanco. "I love them all and I don't want to eat my friends. I know it sounds cheesy but it's true. I started promoting it on my social media and I wasn't expecting people from all different areas of the world reaching out to me, saying how much I inspire them, and I thought that was pretty awesome so I kept at it. I decided to make a whole separate account from my personal one just devoted to veganism and the feedback's been great."

"My whole family is vegan and it's really fun to get creative in the kitchen while staying healthy, and just have fun with it. Veganism can be really healthy, but it can also be really unhealthy if you don't do it right. And it's not like I don't have cheat days with vegan junk food or vegan sweets, but it's important to stay on the program. 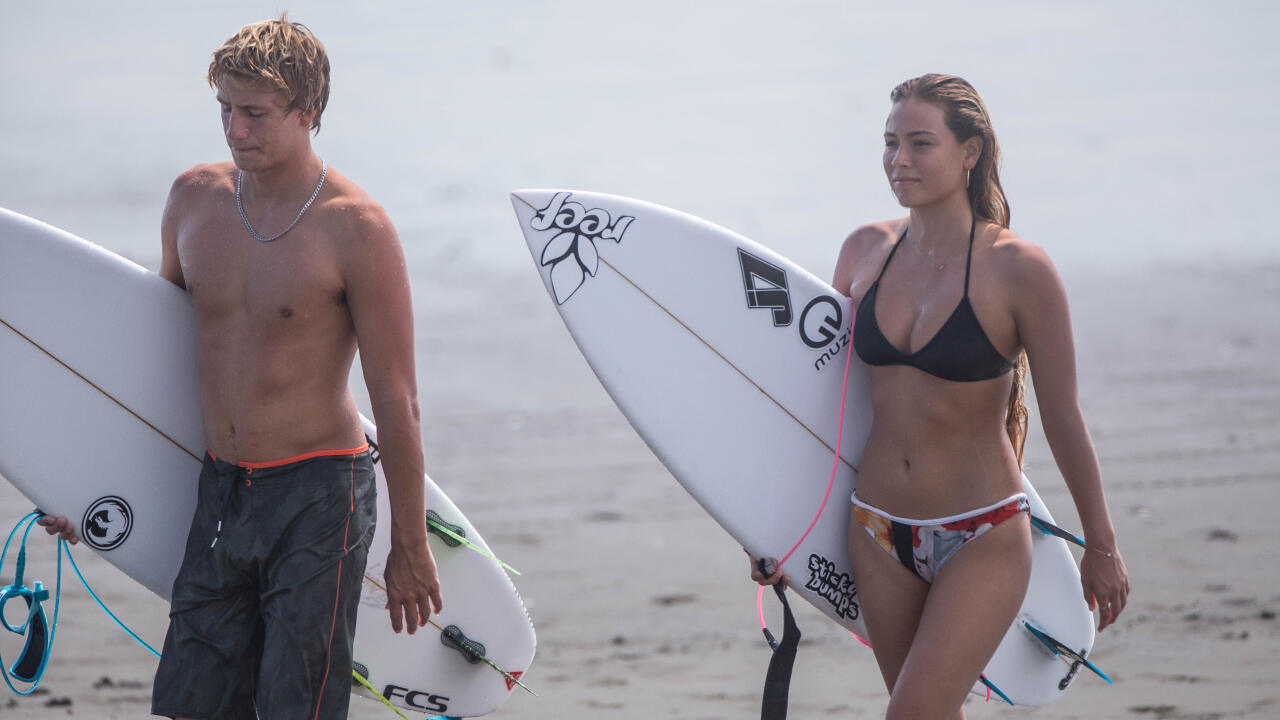 Blanco and her boyfriend, Colt Ward, sometimes travel together when they surf at the same QS contests. - WSL / Johan Pacheco

"I'm going through a transition with my sponsors at the moment and it's a bit nerve-racking. I have a really great manager so I'm putting everything in his hands and not overthinking things. He's right here supporting me on the beach and to have him help speak for me to the sponsors is huge."

"It was surprising how easy it is to be vegan. I was vegetarian my whole life prior so the transition was relatively easy for me to cut out dairy. When I cut out the dairy I noticed I had more energy. I also lost some fat and gained muscle! For anyone thinking about trying to go vegan, do it in steps. Slowly wean yourself off meats and dairy. Go at your own pace. There are a ton of great meat substitutes like Beyond Meat [Editor's note: Blanco is a company ambassador] which can replace red and white meats. Make sure you are replenishing vitamins and minerals you would get with meats and dairy. I like to make protein and fruit shakes.

Coasting through this fun flow

"...Once you have good momentum and you believe in yourself, there's not a lot that can stop you."

0:58
- WSL / Kurt Steinmetz
Tuesday, November 9, 2021
Essentials: What You Need to Know About the Jacksonville Super Girl