North Shore standouts Barron Mamiya (HAW) and Zoe McDougall (HAW) conquered a highly talented field of opponents in big surf today at the Sunset Pro Junior, a World Surf League (WSL) Junior Qualifying Series (JQS) 1,000 rated event. This is Mamiya's debut win in a pro competition and McDougall's first in Hawaiian waves (she won the Billabong Junior Series in South Africa in 2016). The two took home 1,000 points, prize money and the glory of winning in their own backyard. A standout at Pipeline, 16-year-old Mamiya tested his skills at big Sunset today and came out on top. He secured multiple excellent scoring rides in the event, including an 8.0 in the Quarterfinals, and an 8.50 and 8.35 in the Final. Mamiya bested a stacked Final that included Finn McGill, Kauli Vaast and Cody Young by staying committed on his above-the-lip maneuvers and dropping in on some of the biggest waves of the heat. "It was a super sketchy Final," said Mamiya after the awards presentation. "It was super scary because every single kid in that Final was good. But I'm stoked to win."

The 25-minute heat started off with Kauli Vaast, the highest placing Tahitian in the event, finding the first two waves for an immediate lead. But Mamiya quickly answered back with a beautiful ride that judges deemed excellent (8.5) to overtake Vaast and hold first. Sunset specialist McGill went on to drop a 5.8 for a huge slash off the top during his first ride, but with a continually shifting lineup, the surfers struggled to hold positioning. 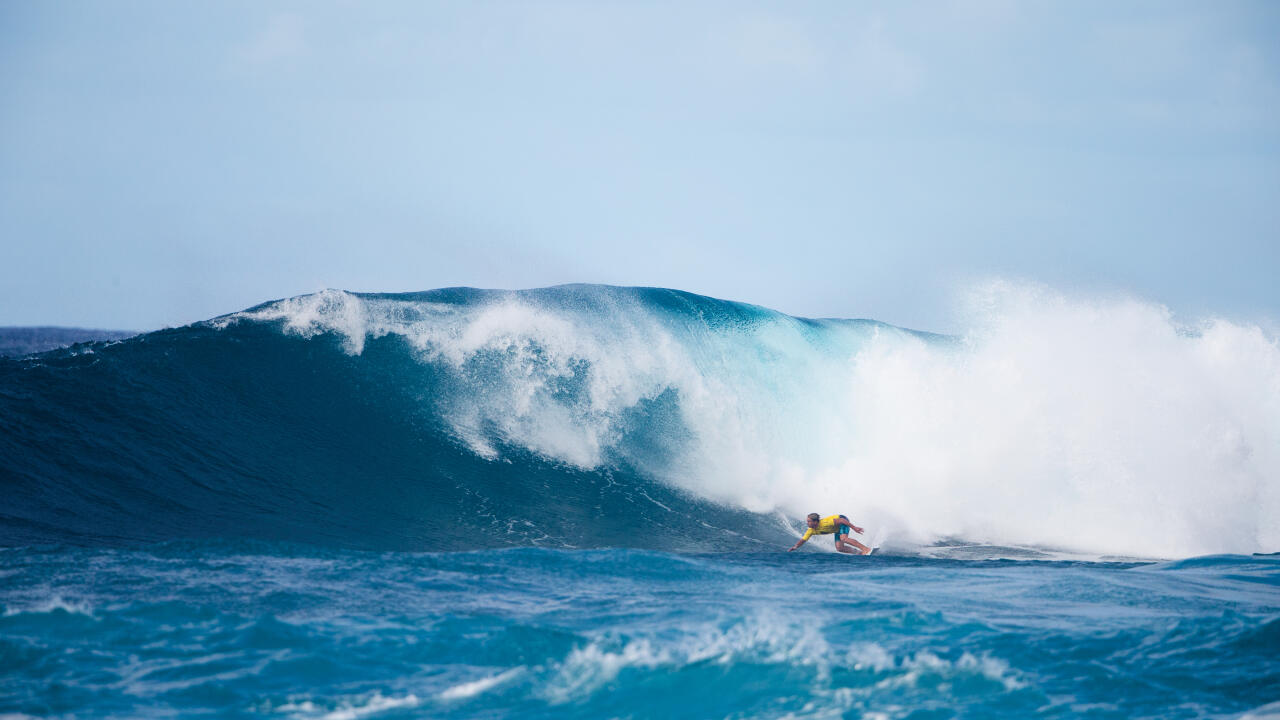 The highest score of the Final, and Junior Pro event for that matter, went to McGill for a massive drop and multiple power turns. His 9.10 shook up the rankings, but in the dying minutes of the heat, Mamiya found his backup ride behind McGill, an 8.35 to secure the win.

"Sunset is a real love/hate relationship," continued Mamiya. "I don't usually ever do good out here, but last year I was working a lot on my technique and a lot of other things that I lacked. I kept working and working and then finally, Sunset just started… I started getting it and understanding it more. And my surfing felt a lot better on the wave and I felt way better than the years previous." McDougall surfs with confidence at her home break. - WSL / Freesurf/Heff

McDougall, on the other hand, has spent years honing her skills at Sunset and today's performance was an indicator of time well spent. She dominated the Final early by taking off on the first couple waves and secured the lead with a 5.75 and 4.90. McDougall looked extremely comfortable despite the powerful conditions and carved her way into some of the heaviest waves of the day. Kade Matson was one of many early round standouts. - WSL / Keoki Saguibo

"I'm so happy to win at my home break in good, sizable conditions, I couldn't imagine a better day," McDougall said post heat. "It was pumping all day. For Sunset, it was pretty consistent, pretty constant waves. I feel like everyone was getting good opportunities." Zoe started the year off with her ‘golden birthday' - she turned 17 on the 17th of 2017, and felt as though the good luck helped propel her toward today's win. "I just want to carry this momentum," McDougall continued. "I started the year at Junior Worlds and got a Quarterfinal finish, and then to come home to this was great. I head off to Australia for the 6,000's next so I'm going to do everything this year."

Runner-up finishers McGill and Brisa Hennessy (HAW) also joined McDougall at the World Junior Championship in Australia earlier this month, both finishing third in the world. Sunset served up some great conditions for the competition. - WSL / Tony Heff

"I had the World Juniors in Kiama and that was my first competition [of the year], so having a second good competition means a lot and definitely gives me confidence throughout the year," said Hennessy after advancing from the Semifinals. "For 2017 I'm going to start doing the whole QS tour just to see how I go and have no expectations. I'm really looking forward to it, it should be interesting."

The Women's Final was rounded out by third place winner Summer Ivy (HAW) and Kauai's Gabriela Bryan, who placed fourth.

The Sunset Open and Pro Junior initiate the WSL Hawaii season with names like Kemper, Irons and Olson.