With such high-caliber talent taking over the Championship Tour in recent years, every surfer is looking for that extra edge -- strict diet, coaches, and training regimens have all become the norm. Joel Parkinson, however, is taking a different approach to the one that led him to his 2012 World Title. Indeed, the Australian CT veteran has been keeping a close eye on his motivation, and has discovered that his Title-year pace is no longer the one that works best for his cause. Despite plenty of distractions, Parko's surfing is looking sharper than ever. - WSL / Kelly Cestari

With three kids settling into primary school and a budding business venture taking off at home, Joel's life outside of surfing is taking up a decent chunk of mental energy. Not surprisingly, after an illustrious professional track record -- which, along with his 2012 Title has included 12 CT wins -- the 35-year-old has considered calling it quits. But as the balance between home life and tour life has finally hit a lovely balance, Joel decided that he's having just too much fun to stop now. "I think I'm at the point in my career where I'm just enjoying it," Joel told the WSL in an interview during October's MEO Rip Curl Pro Portugal. "I'm just surfing the way that I want to surf and taking advantage of the benefits we have while being on tour. There's a lot of stresses and a lot of crap that you can take in when you are really focused on it." The prospect of surfing a wave like J-Bay with one other person is one of the many CT perks that Parko isn't quite ready to give up. - WSL / AVG

The carefree approach seems to be working. In 2016, despite a knee injury and a busy home life, Joel's iconic brand of power-surfing saw him casually climb the ranks to finish the year No. 9 in the world. Last season, he was just two surfers older than 30 to finish in the Top 10 (besides that bald guy), proving that when it comes to competing in the world's best waves, Joel's silky-smooth style has serious longevity. The foundation of great power-surfing is the bottom turn, and Joel's is second to none. - WSL / Ed Sloane

Sure, he may not be clicking giant full-rotations on command, but Joel knows how to play to his strengths: rail always engaged, effortlessly keeping tempo with each section. It's the kind of surfing that makes even the most air-happy grom want to throw in some bigger fins and take a break from flying. He may not be the Tour's highest flyer these days but Parko can still punt. - WSL / Kelly Cestari

And although Joel is still favored against the young guns at many stops on tour (righthand points in particular), his odds of winning are often attached to the phrase "…if the waves are pumping." And there is some truth to that sentiment. The 185-pound lead foot does seem to shine when the waves have some juice. In 2016, however, Joel managed to find results at a variety of venues.

Margaret River Magic
3:24
Parko advanced to his first semifinal since 2014 thanks to a few stunning rides in his QF heat at the Drug Aware Margaret River Pro.

To no one's surprise, Parko started the year off strong with a solid Quarterfinal finish at home in the Quiksilver Pro Gold Coast. Then, following lackluster conditions and an early exit at Bells, he stepped up his game in thumping surf at the Margaret River Pro. The thick Western Australia walls finally allowed Parko to sink his back foot into some power, sending spray to the horizon before going down to Julian Wilson in the Semis.

Parko Lights Up Lowers
1:10
Joel Parkinson's blend of power and poetry at Trestles earned him a spot in the Semifinals of the Hurley Pro.

However, Joel's reliance on powerful surf took a back seat at September's Hurley Pro Trestles. Heading into the event, everyone was expecting a high-flying upstart like Filipe Toledo to walk away with a win. And for a while, it seemed like he would -- until two CT heavyweights entered the equation. Despite the soft, onshore conditions, Parkinson and South African powerhouse Jordy Smith tore the rights to pieces, ending the heroic runs of Toledo and local wildcard Tanner Gudauskas. And although Smith edged out Joel for the win, the pair's impeccable rail work at Lowers certainly sent a message to the younger generation.

"I might be one of the oldest guys in the draw these days," said Joel. "But I'm probably the most frothing grom internally. That's what I strive for." 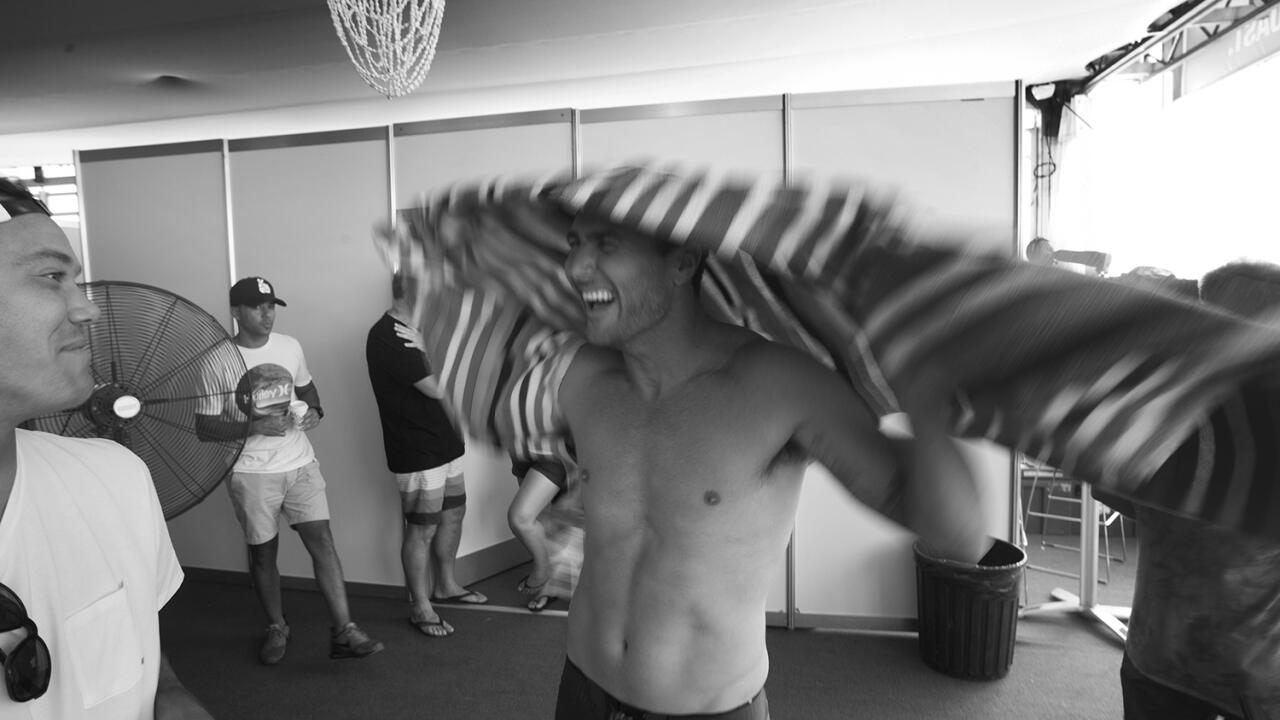 Parkinson may be in his mid-thirties, but his surfing and grom-like stoke suggest otherwise. - WSL / Steve Sherman

"I can honestly say that I won't be on tour five years from now," Joel said. "But I'm committed to next year. I'm not too sure about the following year... I would've said that next year is my last year but I've enjoyed this year so much that I'm too scared to give that up."

Warming Up for Snapper with Mick
1:22
Mick Fanning and Joel Parkinson enjoying the off-season at the Superbank.