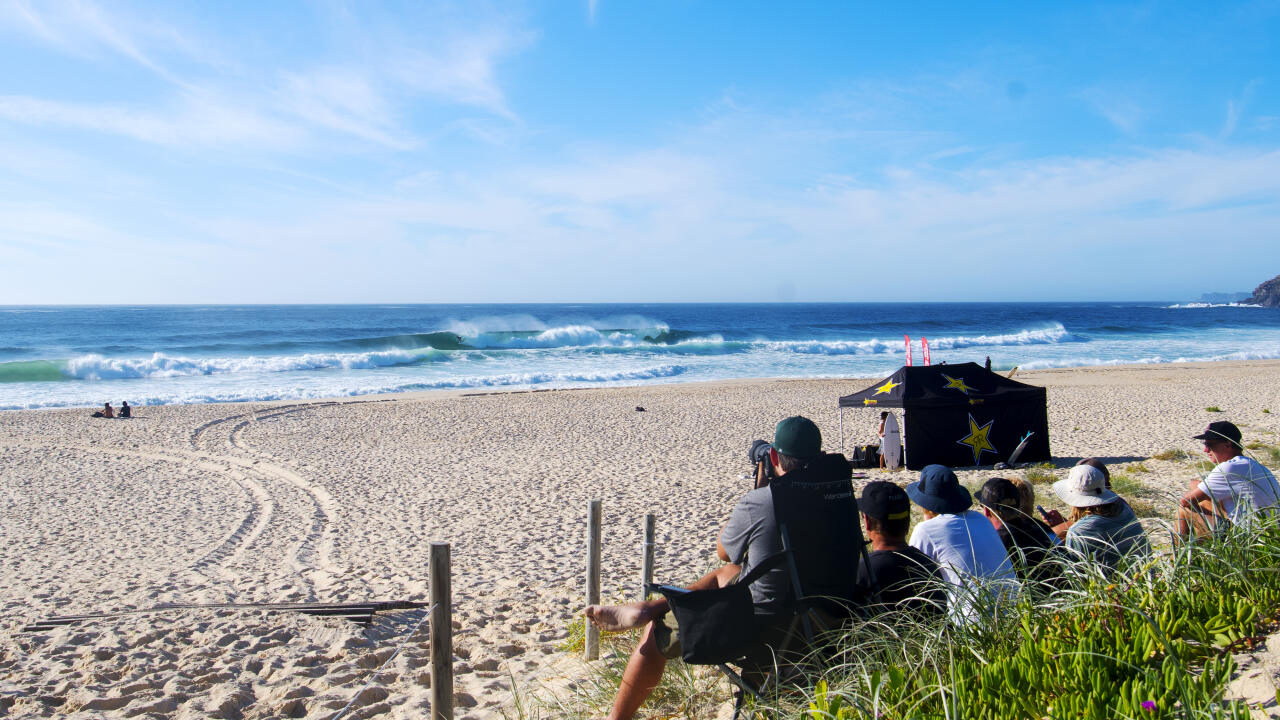 It just keeps getting better at the 2017 Komunity Project Great Lakes Pro presented by Rockstar. After an epic day of competition yesterday, the swell has continued to pump at Boomerang Beach while conditions cleaned up. It was a day full of incredible performances as the men's and women's main rounds were completed, leaving only the Quarterfinals for the last day.

After recently falling off the elite Championship Tour (CT), Hawaiian pocket rocket Keanu Asing has declared 2017 as his year to prove himself. He has started his campaign off strong, putting down some of the best performances of the event. Asing went to town on the long lefts at Boomerang, moving into the Quarterfinals courtesy of his powerful backhand attack. In Round Five he posted a near-perfect heat total of 19.30 (out of a possible 20) with vicious vertical hacks. Keanu Asing reckons 2017 is the year to prove himself. An exciting prospect. - WSL / Tom Bennett

"My backhand is definitely my money maker," Asing said. "I feel like my forehand is also strong but my best results have been on my backhand. Showing up to Boomerang for the first time and seeing the long lefts got me pretty excited. The waves are pumping so the Finals should be good. I'm super pumped to keep going and get on a roll."

On his second visit to Boomerang Beach, Rafael Teixeira of Brazil displayed incredible control on rail, laying huge, gouging hacks on the long, open walls. Teixeira posted a solid heat total of 15.90 to book himself a spot in the Quarterfinals. After recently finishing 3rd at Cabarita, Teixeira is hoping to get a few steps further on his second visit to Boomerang. - WSL / Tom Bennett

"I'm so stoked to be back in Boomerang," Teixeira said. "The waves are pumping and it's just a beautiful spot. I got to the Semifinals at Cabarita so I really want to go one better here and make it to the Final, at least."

Central Coaster Wade Carmichael returned to Boomerang in 2017 as the event's reigning champion. Carmichael is known for his solidity in powerful waves and today was no different with Carmichael destroying any wave he took off on. He moved closer to going back-to-back at the Komunity Project Great Lakes Pro by moving into the Quarterfinals with a massive heat total of 17.00. Wade Carmichael will be hoping to go back-to-back at Boomerang. - WSL / Tom Bennett

"I felt good out there today," Carmichael said. "I'm just having fun really, the waves are so pumping, it's unreal. Two years in a row we have been here and had sick waves, I feel pretty spoiled really. I can't wait to get out there again tomorrow in the Finals."

Kiwi Ella Williams has been showing glimpses of brilliance throughout the Komunity Project Great Lakes Pro. The powerful naturalfooter has been consistently finding solid single-wave scores to push through her heats. Her progression into the Quarterfinals was no different, as she posted one quality wave with an average backup. Williams narrowly advanced in second spot behind Macy Callaghan. Ella Williams was happy to progress through her heat purely so she could get to surf pumping Boomerang again. - WSL / Tom Bennett

"I was super excited out there in that heat," Williams said. "I think I was maybe a little over excited as the waves were so pumping. I do need to settle a bit and just take the waves that will get scores, but it's tough when it's this good. I'm stoked to get to the Quarters and surf Boomerang like this again."

Tahitian Karelle Poppke looked seriously comfortable in the solid surf at Boomerang, even comparing it to waves at home. Poppke laid huge forehand carves to post a mid-range heat total of 12.75 and progress to the Quarterfinals. Karelle Poppke enjoys the power of Boomerang and draws comparisons between it and her native Tahiti. - WSL / Ethan Smith

"That was so good out there," Poppke said. "I really prefer bigger surf so this has been a good contest for me. The waves remind me of a few places at home with the clear water and powerful surf. I can't wait to surf in the Finals."

Japanese ripper Hinako Kurokawa surprised herself when she won her Round Three heat. Kurokawa only caught three waves to win the heat with a total of 10.45 and copped a few huge beatings along the way. Although it was a scary heat for Hinako, she has earned herself a spot in the Quarterfinals at Boomerang. "I'm so tired from that heat," Kurokawa said. "So many of those big sets were landing on my head and pushing me back so it was really hard for me to get out the back. I think that was some of the biggest surf I've seen so I was really scared. I'm so happy I won it and made it into the Finals, I didn't think I was going to win at all." Long lefts were on offer at Boomerang on Day 4. - WSL / Tom Bennett