The women's Gotcha Ichinomiya Chiba Open QS 1,000 may not be worth the same points as last year's 3,000, but competitors are surfing with just as much fire and delivered valiant performances throughout Round 2 and Quarterfinal draws. Local contingent flourished with their home break knowledge and gave their spectators on the beach something to cheer for. Hinako Kurokawa brought her best when she needed it most against an in-form Minami Nonaka. Kurowaka dropped a near-perfect 9.00 (out of a possible 10) and solidified her spot into the Semifinals. The Japanese upstart earned a runner-up in this event last year and now looks to take that campaign one spot further.

"I'm really happy with that heat and had my game plan of positioning down for it," Kurokawa said. "I moved to position to right side of the contest zone then found that middle-sized, long shoulder-high wave which felt great. Getting second here last year definitely has me wanting to win this event and I'm feeling great to do so." Ren Hashimoto put her name in the running as a competitor to beat after an outstanding Round 2 performance with decimating, forehand turns to earn an excellent 8.83. Hashimoto wasn't finished, and added a 7.70 to accrue the women's second-highest heat total so far -- a 16.53 (out of a possible 20). Hashimoto went on to eliminate fellow event standout Julie Nishimoto in the Quarterfinals with another dominant performance and now has her eyes set on a Finals appearance.

"Currently I'm not doing so good this season just yet so hopefully I can work on getting better results starting with this event and continue that momentum," Hashimoto said. " It is very important for me to get the job done since I'm looking for higher QS ranking at this point in my career. I really want to advance and be a true world-level competitor and bring that higher level of surfing in the future."

Upset of the Women's Event Unfolds 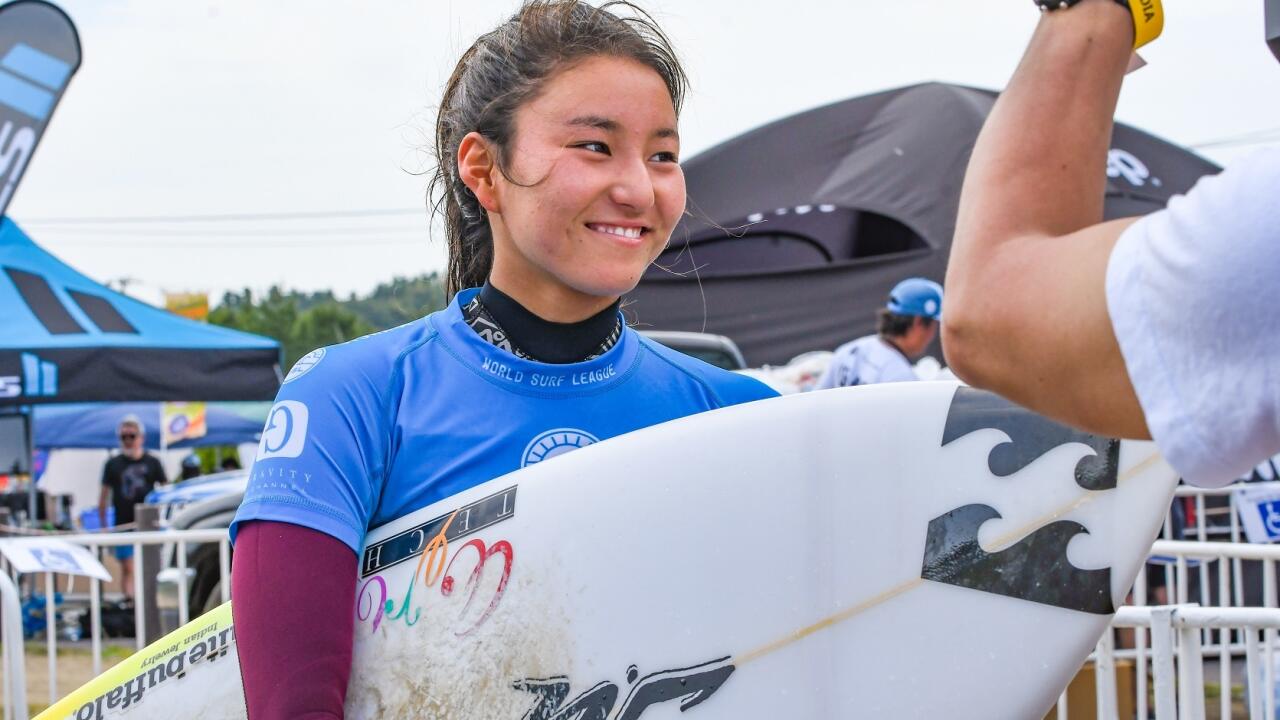 Another all Japanese affair finished Quarterfinal action featuring Shino Matsuda and Hawaiian, now representing Japan, Mahina Maeda. An incredible finish to a nail-biter heat witnessed Matsuda come away with a huge win in the dying seconds over the favored Maeda. Matsuda held a slight lead over Maeda heading into the final minutes, but one last exchange looked like Maeda may just pull it off as she posted a 7.77 in need of a 6.18. However, it wasn't to be as Matsuda dealt her one last blow as she got the second wave of the set and finished with a 7.60 to finish.

"I'm so happy to win a man-on-man heat with a traveling, world level surfer," Matsuda said. " I just wanted to show my surf style and advance to next round and I got so much confidence in myself now. It is so important be competing in my own country at a QS event, there aren't many events in Japan so it is great to enjoy surfing here."

Trouble on the Home Soil But, amid the local standouts, Karelle Poppke sent shockwaves through the contest site after she eliminated defending event winner Minori Kawai. Poppke turned up the volume on her relatively quiet campaign and now finds herself in the Semifinals. The Tahitian does have a QS victory in her resume already, but hasn't competed much outside of her Hawaii/ Tahiti Nui region, and showed some of her potential today.

"This is my first time here and I'm just so stoked make it this far," Poppke said. "I'm just trying to do my best surfing and this is like some of the beachbreaks we have in Tahiti so I came prepared. The water temperature here is also pretty similar to my home when the winds come up so that hasn't been a problem and I just want to finish this event strong."

Event organizers will reconvene at 8:00 a.m. JST to determine a call for the start of women's Semifinals and get finals day underway.