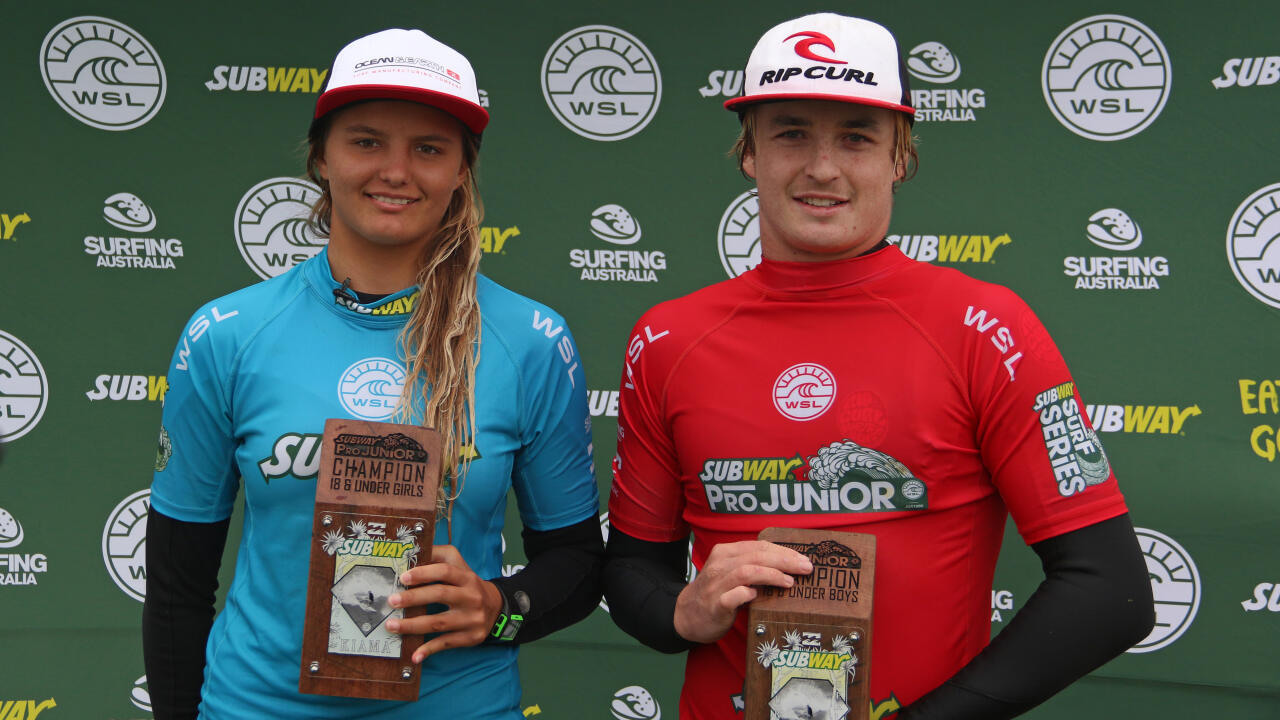 Lucas Wrice and Sophia Fulton have taken out event five on the Subway Surf Series, claiming the top spots after a handful of exciting heats in difficult one-foot waves at Bombo Beach.

After finishing runner-up in several Pro Juniors last year, Lucas Wrice was able to go one step further at Bombo today, taking top honours over Sandon Whittaker in the Boys division. Wrice, who is coming back from a recent injury, showed no signs of restraint today as he attacked the tricky sections with a healthy mix of flair and style to post a 15.00 heat total (out of a possible 20 points) and claim the top spot on the dais. Wrice dialled in hi local knowledge to take one of the biggest wins of his career. - WSL / Ethan Smith

"It feels amazing to win," said Wrice. "I've been trying to win a Pro Junior for some time and came second a few times, so to go one step further feels awesome. I tore my meniscus and cartilage and was out of the water for two months and only really returned to surfing last week."

Despite Whittaker managing to muster up the highest wave score of the final - an excellent 8.00 - he was unable to find a 7.00 to knock Wrice from the top position. Whittaker put up a valiant battle over the duration of the 30-minute affair executing a chain of giant backside turns, but a flat spell meant he was unable to scratch into anything that would bump him into the winner's chair. "My goal was really to move up the rankings, so getting second place finish should do that," said Whittaker. "The waves were really tricky out there and unfortunately I couldn't find a really good back-up score for my 8.00. Still, to finish in the runner-up spot feels amazing."

Sophia Fulton claimed her maiden Pro Junior victory taking the win with a respectable 13.65 heat total. Fulton remained in the runner-up spot over the course of the heat, only to strike in the final ten minutes, posting an impressive 7.50 wave score for a barrage of backside snaps. The victory has given Fulton a solid jump in the JQS rankings going into the final two events of the series in Queensland. "I'm so stoked to have won," said Fulton. "The lineup was definitely tricky, but I knew if I got the best waves of the heat then I could get the score. Alyssa and I have shared a few heats in the past and it definitely feels good to get one over her."

After a recent win at the Subway® Surf Series Pro Junior in WA and gaining entry into the Roxy Pro Championship Tour stop via the trials, Alyssa Lock was able to claim the top spot on the WSL JQS rankings thanks to claiming the runner-up position. Lock held down the lead for the majority of the heat, only to fall into second place following Fulton posting an impressive 7.50 wave score. "I would have loved to have won the event, but it still feels great to get second and move to the top of the rankings," said Lock. "My goal is definitely to qualify for the World Juniors next year, so this result puts me in a good position for it."

The South Coast hamlet comes to life for stop five of the Subway Surf Series JQS.