The day dawned and the line-up revealed pristine 4 - 6 foot long left-handers, setting the stage for an epic day of finals action. The historic day of competition saw the first ever WSL QS champions crowned at the Krui Pro in South Sumatra. Adding to the excitement, both the men's and women's event champions are first time QS winners.

Lucy Callister took out the all-Australian women's Final over Ellie Francis in a one sided affair. Callister and Francis were the standouts all event, with both surfers using their backhand attack to win their way through to the Final. In the Final Callister was in sync with the sets, putting herself on the best waves and locking in some solid scores. 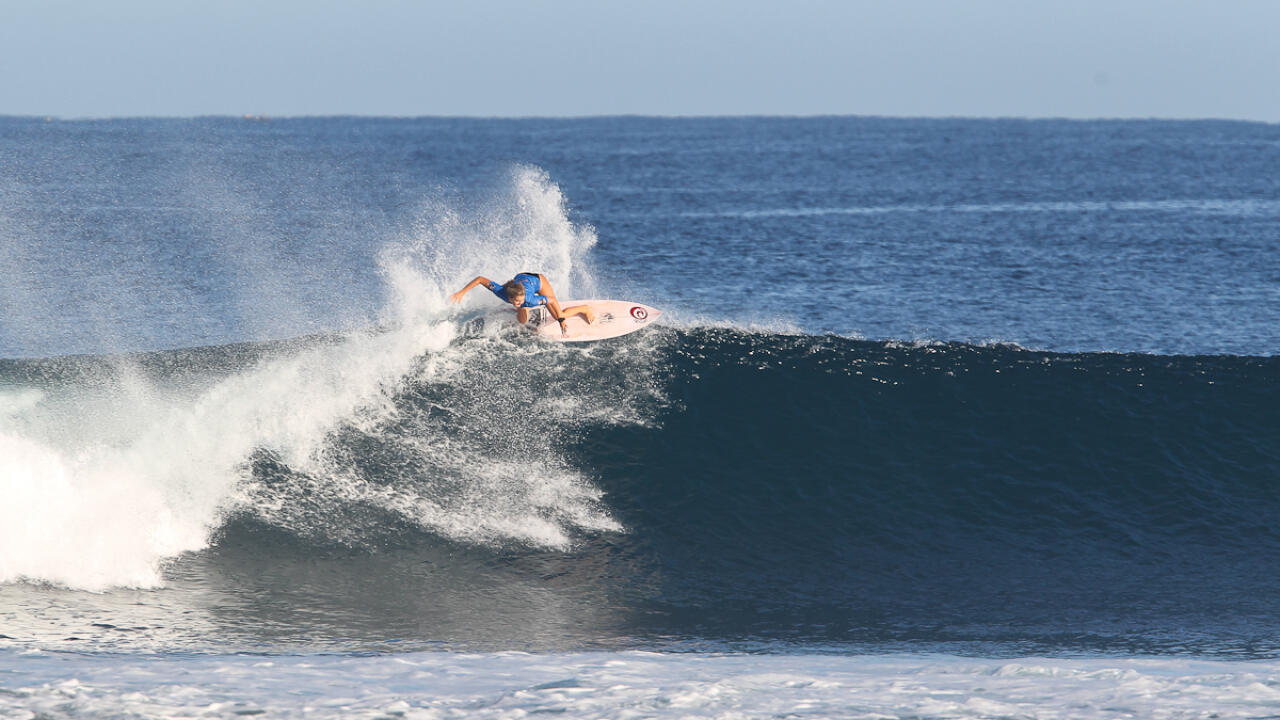 Lucy Callister was a standout all event with an amazing display of backhand surfing. - WSL / Tim Hain

"It's not just my first QS win, it's my first QS Final and it feels so good," Callister said. "I had a few seconds in the Juniors last year and I knew I'd have to work harder to get a win. I had a few bad results at the start of the year and I was getting a little down about my surfing and competing. Then I decided to do a few of these QS1000s to get some confidence back and it's worked. I feel really good and am excited to keep doing more events."

Most of the surfers in the draw travelled to South Sumatra without their family, but the Callisters came as a part of a family holiday. Callister is known for a forehand attack, but her backhand was good to her at Krui. - WSL / Tim Hain

"It's been so good to have my family here, we came here early for a family holiday and the contest. I'm so stoked to be going home with a win, it's the best holiday ever. It was really special to have my Mum, Dad and Brother and Sister here."

Keijro Nishi from Japan took out the men's event with his unique brand of fast and hard surfing. The young goofy-footer was a standout all week. The lead wen't back and forth in the Final, but Nishi put an exclamation mark on the event sealing victory with a 9.00 on his last wave. Nishi and Le Grice on the podium at the Krui Pro. - WSL / Tim Hain

"This feels incredible!" Nishi said. "We have had great waves all week, but we had the biggest and best waves in the Final, we were very lucky. I knew I had to find a wave with an open face to do some big turns because the heat was close and I found one at the end and took the win. I can't believe it. I love this place, I am coming back here next year."

Moses Le Grice advanced into the final after defeating event standout Jean Da Silva in the Semis. The stylish regular footer built on his performance in every heat. He started the week of slow but you could see with every heat and every wave his confidence grew as he got to know this wave better. "I sort of struggled with the wave early in the event," Le Grice said. "As soon as I made my first heat I just relaxed and tried to have fun and then I started to get bigger and better scores. It's been a great event, the level of surfing was really high so to make the Final is a huge confidence booster for me."

Ellie Francis used smooth and powerful backhand carves to progress into the final, but found herself out of rhythm, missing a few sets and uncharacteristically falling on a few sets. But a career best result had the young Australian feeling confident for the rest of the QS season. Ellie Francis on her way to the best result of her career at the Krui Pro. - WSL / Tim Hain

"It's frustrating to make the final and lose because you are so close to your goal," Francis said. "I am happy now that it's sinking in, second is really good for me. We have had the best ever waves for an event and I am now feeling good about competing."