Michael February and Zoe McDougall claimed the Men's and Women's titles at the Corona Durban Surf Pro presented by Quiksilver and Roxy in glassy 2-3 foot waves at Dairy Beach on the Durban beachfront.

The top seeds in their respective QS1,000 rated events, the pair delivered come-from-behind victories, producing high-scoring rides in the pressure-packed dying minutes of their Finals to lift the trophies, pocket the bulk of the prize money and add 1,000 precious points to their QS rankings.

The JQS1,000 18-and -under event titles went to Adin Masencamp (Strand) and Kayla Nogueira (uMhlanga), both of whom led for the bulk of their respective final encounters, with Masencamp posting a pair of nine point rides that left his rivals comboed -- needing two new scores to catch up.

February (Kommetjie), ranked No. 26 on the Qualifying Series (QS) leaderboard and wearing the zebra-striped Skullcandy rankings leader's vest in Durban, has been the form surfer throughout the City Surf Series and advanced to his third successive final after earning totals in the high teens in virtually every heat he contested. Up against fellow QS surfer Matthew McGillivray (Jeffreys Bay), February started the Final with a couple of mid-range scores before being overtaken by McGillivray, but came back with an excellent nine-point ride in the last couple of minutes to secure his second victory this month.

"I started the final with two mediocre rides and then Matt overtook me with that 7.8 he got under my priority, and then added a 6.3," said February. "After sitting for nine minutes with priority I lost it on a small wave, so I was super nervous. But with three minutes to go probably the best wave of the heat came through and gave me the chance to get that 9.0."

"I'm super happy to get another win and extend my rankings lead. These City Surf Series events have been great, they fill the gap between the two QS6,000 events in Australia early in the year and the bigger events here and overseas still to come. The momentum I've built up will really help me in Japan next month."

McDougall came into the event ranked No. 13 in the Women's QS standings. The Hawaiian dominated her heats on the way to the Final and started strongly with a 7.17. But a see-saw battle ensued when reigning WSL Africa Women's champion Faye Zoetmulder (Cape St Francis) grabbed the lead and then former CT campaigner Nikita Robb (East London) took over with back-to-back rides. . 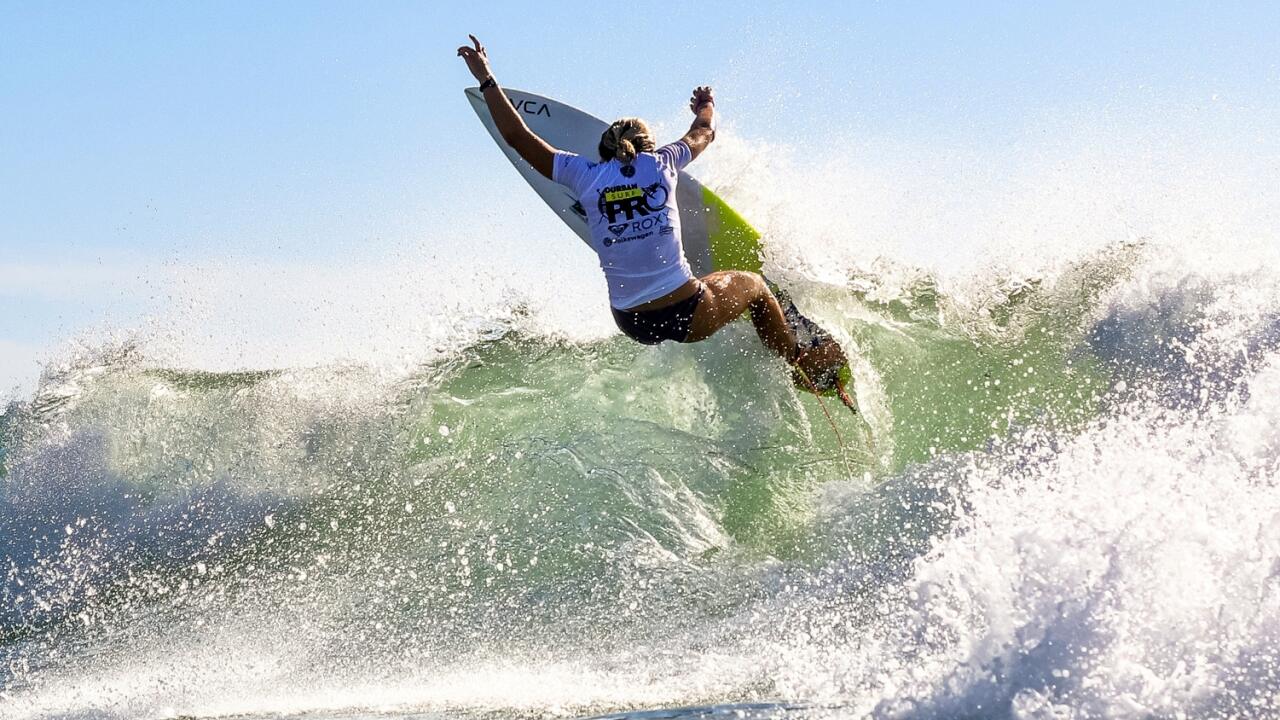 Without priority McDougall caught a wave in the dying seconds that walled up and she produced the maneuvers that earned her a 7.57 and the event title.

"It was a pretty slow heat for waves and with the high tide all four of us were close to the pier trying to get the lefts," said McDougall. "I swung on that last wave without priority and Emma [Smith] let me have it, so I guess I owe her one.

"I'm glad to pick up the 1,000 points and am going to spend another month here in Jeffreys Bay -- my dad is coming over for a surf trip -- before going to Mexico and El Salvador for QS6,000 events early in June."

Masencamp won all three heats he contested in the Junior men's event, finding the best waves and employing his full range of carving and above the lip maneuvers that relegated his three fellow finalists to fighting for second place.

"I'm super happy to get the win here after struggling to get it together in the last two events,' said Masencamp. "I feel like I'm fully in tune with the rhythm of the ocean and I'm surfing really well, so I'm looking forward to the next events in Cape Town and Lamberts Bay." A super happy Adin celebrates on the podium. - WSL / Thurtell

Throughout the Junior Women's event, Kayla Nogueira bounced back to form with great surfing, posting seven- and eight-point rides in every heat, including the Final, and adding the Durban title to the one she collected in Port Elizabeth a fortnight ago.

"There were very few waves in the final and we sat for nearly five minutes before catching anything. But once I had that 8.17 I led all the way to the end," said Nogueira. "I really wanted to do well in this event so it feels good and I'm really stoked to be back at the top of the rankings again." After two wins in three finals on consecutive weekends, February has a significant 1,200 point lead at the top of the 2017 WSL Africa men's rankings, with Steven Sawyer (Jeffreys Bay) and Beyrick De Vries (uMhlanga) within 200 points of each other in second and third places.

The other three leaderboards are all much tighter with Emma Smith (Jeffreys Bay) holding a slender 50-point lead over Crystal Hulett (St. Francis Bay) among the women, Jake Elkington just 70 points in front of Masencamp in the Junior men and Nogueira a slightly more comfortable 250 points ahead of Sophie Bell (Salt Rock) in the Junior Women.

Highlights from the final day of the Corona Durban Surf Pro