Keramas continues to produce the goods as the Komune Bali Pro pres. by The Mad Hueys ran through Rounds Four and Five, leaving just eight worthy Quarterfinalists to fight it out on finals day. Waves were in the 4-to- 5-foot range with slightly wind affected conditions, making the surfers work for their scores.

Adriano de Souza, the 2015 World Champion and No. 1 seed at the Komune Bali Pro, continued his red-hot streak at Keramas today. De Souza posted 9-point-plus rides in both of his heats to secure a spot in the Quarterfinals. The Brazilian is using this event to prepare for the next Championship Tour contest, in Brazil, and is in great form as he heads toward his hometown event, the Oi Rio Pro. De Souza advanced in first place with Australia's Robbie Rickard also advancing in the second spot. Mikey Wright and Riley Laing were eliminated in third and fourth. Adriano De Sousza is the events No.1 seed and is looking pretty unbeatable on the big walls of Keramas. - WSL / Scott Hammond

"I'm happy with how I'm performing here," De Souza said. "I wanted to come here, surf some good waves and post some big scores and it is working. I really looking forward to finals day, there's a lot of great surfers in this event so I know I will need to be at my best. I feel bad for Mikey Wright in that heat, he was eliminated with a 9.90, it's hurts to lose like that, but this is competition and it happens sometimes."

Brent Dorrington clocked a solid round five heat win to advance into tomorrow's Quarterfinals. Dorrington is The Mad Hueys last team rider left in the event and mixed tubes, big carves and aerials to impress the judges to progress alongside last year's runner-up Shane Holmes who finished in second. 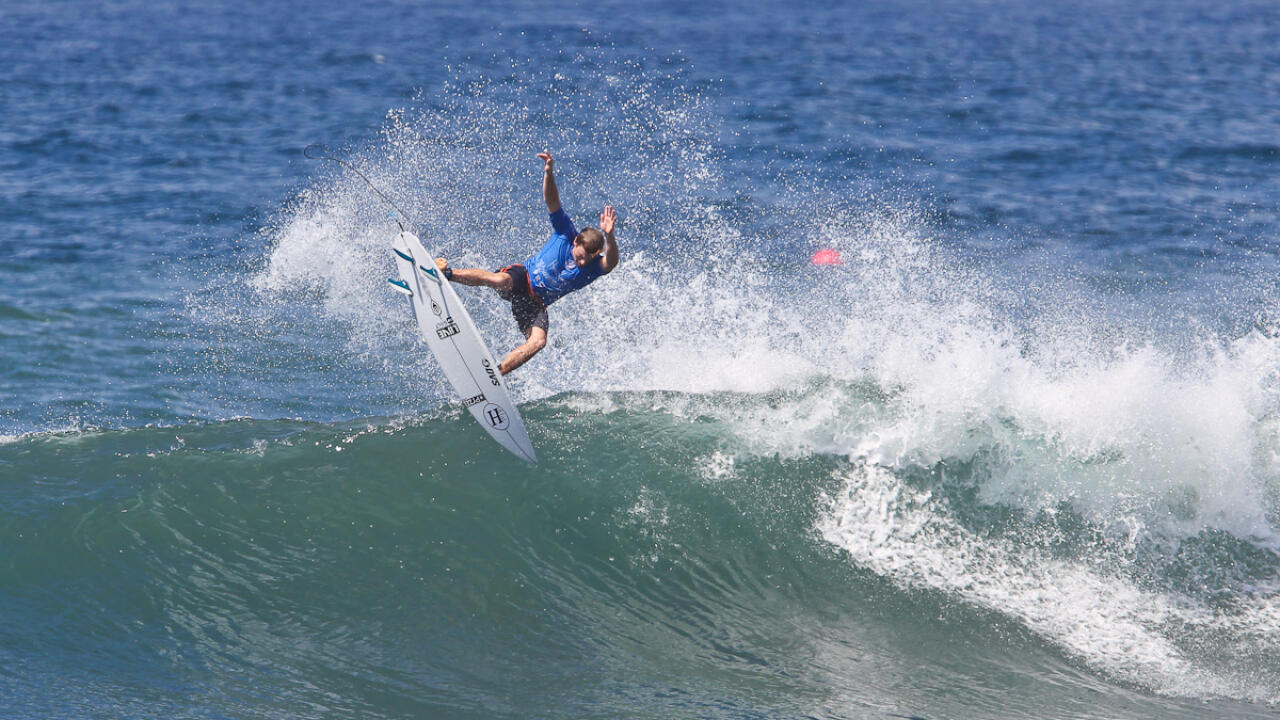 Brent Dorington throwing heat at Keramas in a contest he's been waiting to compete in for three years. - WSL / Tim Hain

"Keramas is probably my favorite wave in the world, I've been coming here since I was 12 years old," Dorrington said. "This is the first time I've surfed in this event, I missed the first two because I was at other QS events and last year I injured myself the day before my heat. So I am loving being here and making heats. It's my brother's Bucks Party tonight so I may have to take it easy because I want to win."

Sebastian Zietz is the event No. 2 seed and threw some massive turns at Keramas to claim an impressive heat win in round five to advance into the Quarterfinals. Zietz is currently ranked 10th on the Championship Tour, but is using the Komune Bali Pro as a working holiday to get some waves and some pressure free heats under his belt before the next CT stop in Brazil. Sebastian Zeitz is another CT competitor who has been looking dangerous in the punchy waves of Keramas. - WSL / Scott Hammond

"You never know who's going to blow up, we had Rio Waida beat Kai Otton in my heat so you need to be on your game," Zietz said. "I thought about going home after Bells, but Bali is such a rad place I figured I'd stop here for the event and then I go on a boat trip next week to get some wave before the next CT."

Mitch Parkinson's cousin Joel Parkinson won the Championship Tour event at this very location back in 2013, but this year Mitch is the one to watch. Mitch has been the best all-around surfer of the event so far, launching and landing massive aerials, riding tubes to perfection and laying down some solid rail turns. He will take on Indonesia's Rio Waida in the Quarterfinals. At a contest that has been making waves for the time competitors have been spending under the lip, Mitch Parkinson sure has been spending some time above it. - WSL / Tim Hain

"I can't think about winning, I think I'm doing well because I've got no pressure on me at all," Parkinson said. "This wave is incredible, it has it all. It's good for turns, big air and barrels. I can't wait for my man-on-man Quarterfinals."