As if being a pro surfer wasn't dreamy enough, Tatiana Weston-Webb and Jesse Mendes get a double dose as a couple on the Championship Tour (CT) and Qualifying Series (QS), respectively. While their competition schedules rarely match up geographically, this month they enjoyed some time together in Brazil: Mendes, who is currently No. 1 on the QS rankings, was a wildcard at the men's Oi Rio Pro, while Weston-Webb was competing in the women's CT event. 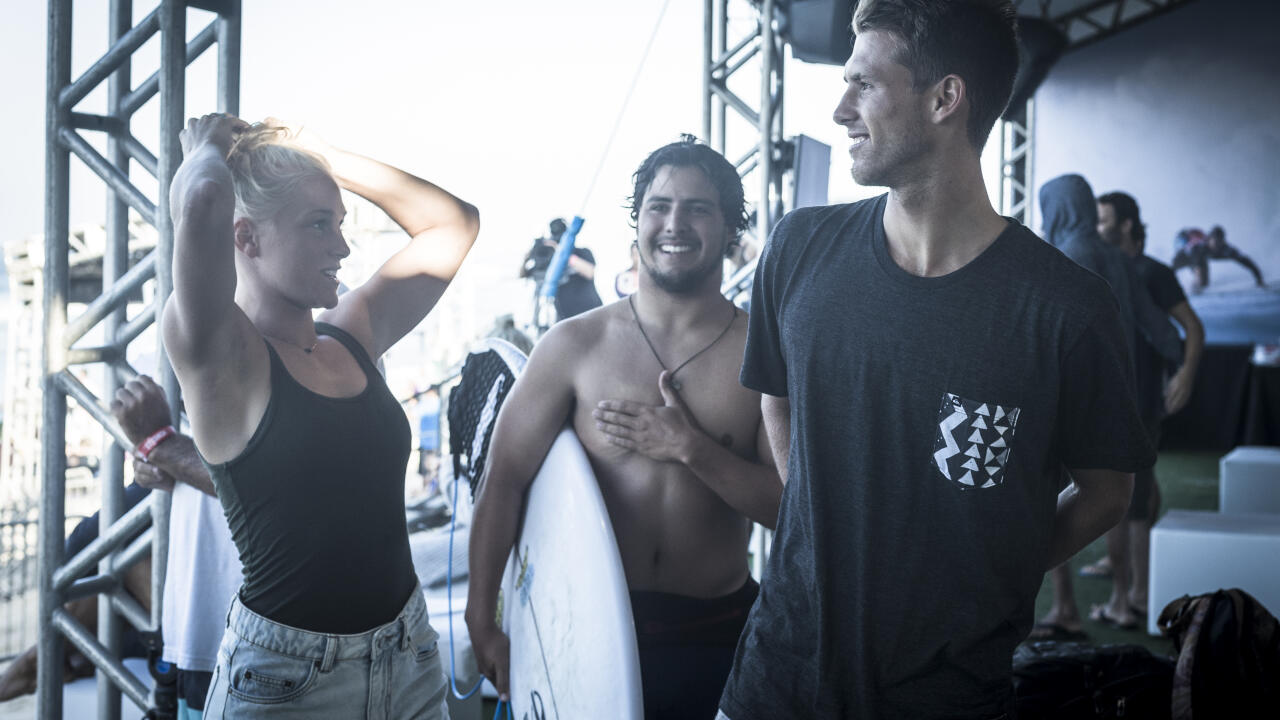 Tatiana and Jesse (far right) have been able to travel together for the past few months. This week, however, they headed to different islands: Mendes to Japan and Weston-Webb to Fiji. - WSL / WSL/POULLENOT

Now it's back to their respective Tours, with Weston-Webb already on Tavarua for the Outerknown Fiji Women's Pro, and Mendes in Japan for the Ichinomiya Chiba Open - Men's event, chugging ahead on the QS points-train. Before they headed to their respective competition corners, they opened up about life together (and apart). 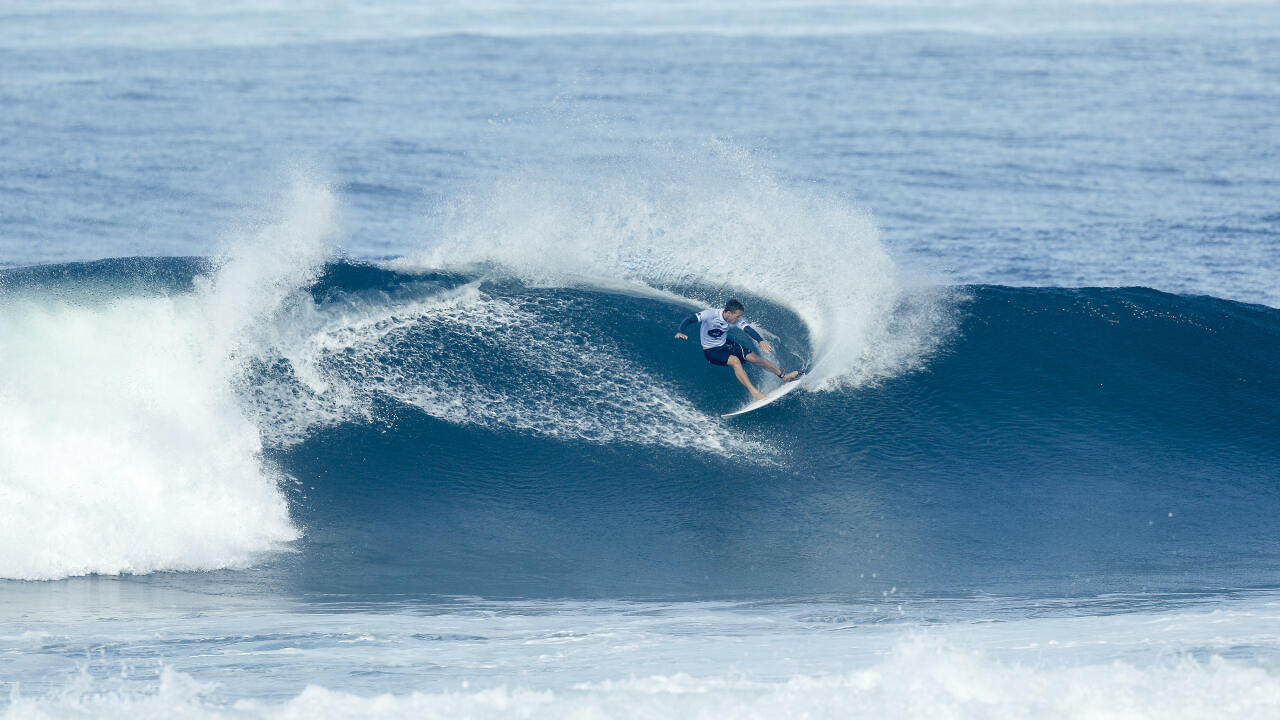 As the current, top-ranked QS surfer in the world, Mendes has scored several wildcard spots in elite CT events so far this year. Last week, he surfed in the Oi Rio Pro. - WSL / Damien Poullenot

World Surf League: Let's go back to the beginning. How did you two meet?
Jesse Mendes: We started hanging out in Mexico, during Los Cabos [Open of Surf, a QS event each June].
Tatiana Weston-Webb: That was about three years ago. He started checking me out. We hung out and it was like we were best friends instantly. It was like we knew each other forever. After that Jesse became obsessed.
JM: Pretty much.
TWW: We would hang out every day. After about a month of that, he was leaving for a trip so I asked him what was up with us. Three years later, here we are.

What were some of the initial challenges of being on the road while dating?
TWW: I think the longest we ever stayed away from each other was three months, and that was after we first met. For me, it was weird when we saw each other again because it was like we were meeting again [for the first time]. It was still new.

What was it like when Tatiana made the Tour? Did that shift things?
JM: For a while we were both on the QS. She qualified when we were in Brazil in 2014. It was the last event. She was against Alessa [Quizon] in the Final and whoever won, qualified. Right after the Final, I left to catch my flight, but I was stoked I could be there to support. I ended up getting super close to qualifying, but didn't.

We work as a team. I want to see her doing her best and she wants to see me doing my best. Hopefully it works out this year and we'll both be doing the CT.

Do you two counsel each other on your careers?
TWW: At first we didn't want to because we didn't want it to get in the way of our relationship. We would get mad at each other if we tried to say something. I'm really hard-headed and so is he.
JM: You can only have one person telling you what to do, not multiple. It doesn't really work out. But we do give tips.
TWW: Now we are a lot more open. We've gotten more comfortable. Especially after this year in Australia. We traveled alone together, so he basically only had me. It was the weirdest thing because he would be looking back at me during heats. I was freaking out like, 'He's looking to me for signals, what do I do?!' Finally, I was like, ‘Okay, go that way!.' I think that made everything more mellow. He knows I'm a surfer and I know what I'm doing, so he trusts me if he's lost in the water and I'm up watching. With his win at the men's QS10,000 contest in Cascais last fall, Mendes was within reach of qualifying for the CT. He just barely missed the points cutoff, though, and is trying again this year. - WSL / Laurent Masurel

Outside of surfing, what would you say are the biggest things you've learned from each other?
JM: Open the mind a bit, to listen to other people. I would always listen but I wouldn't always take it in. I'm much more open now. Even if it's someone that I'm not sure about, because they are looking at it through different eyes.
TWW: It's more like you learn very valuable life lessons because when you are with someone all the time and seeing things through their perspective. Jesse is very considerate of other people and I've learned how to be like that. He's really patient and kind. That extra awareness, being conscious of one another, lifting one another up.

How do you spend time together away from surf competition?
TWW: We love playing tennis. We're really sporty. We like playing soccer too. JM: When we are with our friends we will play different games. Like Altinha. And we like eating.

How do you take care of each other?
TWW: By being positive. For me I like to put him on a pedestal, that way he always feels like he is important to someone. And vice-versa. And it's real. He is the most important person in my life besides my parents.

What would you say is the most unique thing about couples who are surfing on the Tour together?
JM: We get to travel everywhere together. Some couples go on trips once or twice a year, tops. But for us, it's just normal. Does that make it hard to feel like you have daily life together?
TWW: As far as being in a relationship goes, we have our own lives. We don't say that we have lives together yet. We aren't married. We aren't going to take on the role of being husband and wife. We're still just boyfriend and girlfriend. We want it to be that way. He wants to go home and see his family and I want to go home and see mine. A lot of people live together before they get married but I don't want to do that. Like, I love you but I want to go home. We aren't complicating it.
JM: There's time for everything.

Catch Mendes live this week surfing at the Ichinomiya Chiba Open - Men's QS6,000. Watch Weston-Webb, meanwhile, go up against Tyler Wright and Bethany Hamilton in Round One of the Outerknown Fiji Women's Pro live daily from May 28- June 2.