The Hawaii Youth Surfing Development Organization lit up Haleiwa Saturday at the first annual Blue Carpet Benefit, which raised awareness and support for the non-profit's year-round programs. Hosted at the World Surf League (WSL) Hawaii office in the North Shore Marketplace, the Benefit featured the Oahu premiere of Tim Bonython's sensational film The Big Wave Project, and a crowd of nearly 100. The HYSDO Benefit drew a crowd of supportive members from the community and beyond. - WSL / Turkowski The crowd fills in at the WSL Hawaii Headquarters on the North Shore of Oahu. - WSL / Turkowski The film debuted to an eruption of cheers and the evening maintained a high level of enthusiasm thanks to the stunning cinematography of monstrous waves, horrendous wipeouts and beautiful breaks around the world. Hawaii's own big-wave athletes Aaron Gold, Jamie Mitchell, Billy Kemper, Mark Healey, Paige Alms, Garrett McNamara and more careened down 30-foot faces on screen while Gold and Mitchell stood among the crowd in support of their community. Jamie Mitchell, one of the big-wave surfers in attendance, with his pint-sized plus one. - WSL / Justin Turkowski

During intermission, Il Gelato Hawaii served up local goat cheese and guava and Waialua Chocolate gelato to cool down guests as the silent auction bidding heated up. Winners were announced halfway through the night and included Oceanic Time Warner Cable's President Gregg Fujimoto, who took home the Pyzel board, surf coach Jason Shibata for the coveted win of the WSL jersey pack and one of the Hydroflask fleets, and local realtor Orion Barrels' $200 Banzai Sushi gift certificate score. Other auction items included an Xcel Wetsuits prize pack, SoHa Living gift certificate and VIP experiences to the Hawaiian Pro and Vans World Cup. Industry notables like founder of professional surfing Randy Rarick, Australian surf pioneer Mark Warren, surf artist Hilton Alves and the award-winning filmmaker himself Tim Bonython added to the turnout. Those who could not attend but made valuable contributions included Jerry Coffman of Jerry's Pizza in Waialua and Friends of Senator Wakai. 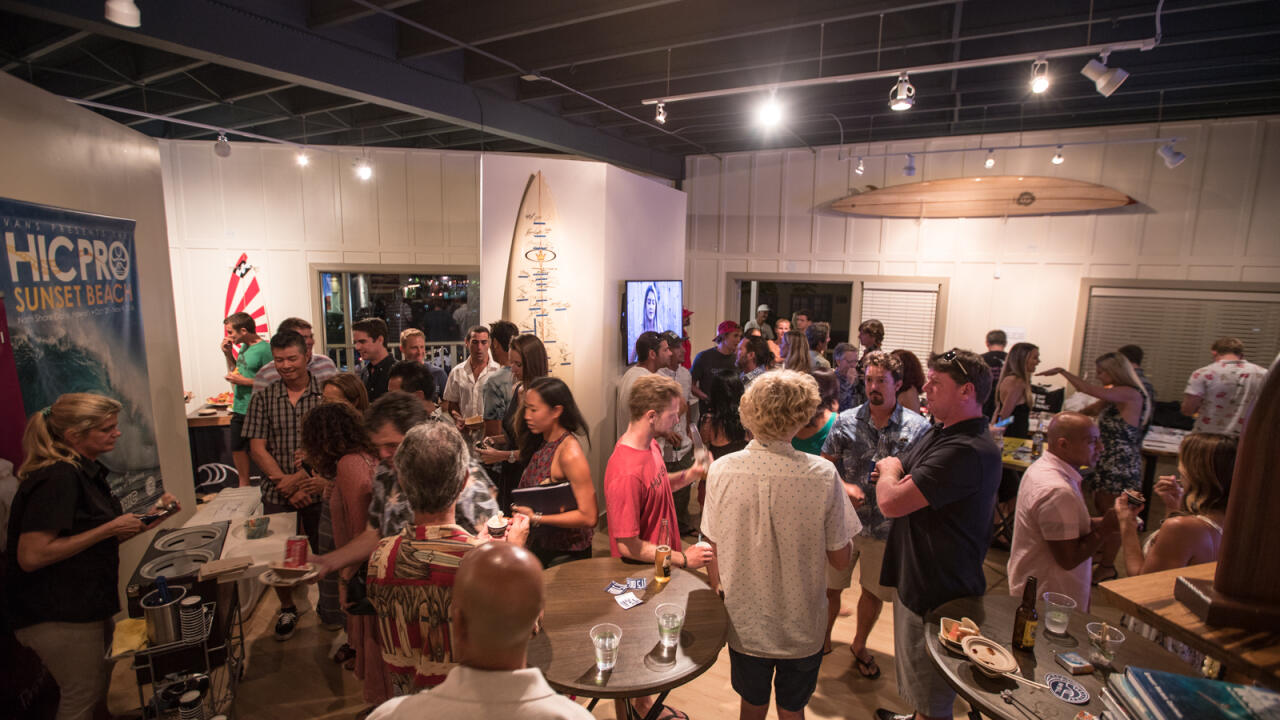 A very special thank you to Ke Nui Kitchen, Il Gelato Hawaii, Island Paradise Party Rentals, KT Protection Services, Paradise Beverages and Tim Bonython Productions who all helped make the event a success, and a big mahalo to the organizations that contributed to the silent auction. Thank you to our community members who came out to support the younger generation.