Day 3 of the Ballito Pro pres. By Billabong didn't disappoint with playful surf once again to complete the second round of competition. Here are a few highlights.

Josh Kerr hasn't been a familiar face on the Qualifying Series (QS) for some time, and for good reason. He's been hanging around the Championship Tour's (CT) Top 10, not needing the security of a QS cushion to fall back on. Josh Kerr is one of the few CT athletes to survive Day 3 in Ballito. - WSL / Kelly Cestari

Coming back to Ballito for the first time since 2011, his heat started just fine, with a decent 6+ ride before everything went south. A sketchy landing from an air sent half of his board to shore while the Aussie swam toward a backup board on the beach. By the time he reached the lineup again, the other guys had done the job and in third position with only a few minutes on the clock, Josh needed something big.

Starting on a closeout right which looked like it had absolutely no potential, he launched into a big forehand rotation, tweaked just enough with a little grab, and landed perfectly smooth for an 8.43 and the win. Yep, that backup board looked just fine under his feet. Kerr had to bring his A-Game for this. - WSL / Kelly Cestari

"I can't complain, I have a lot of good boards," he said. "The whole plan is to come here early, get rid of the jet lag before J-Bay and gain a bit of confidence too, I had a bit of a lackluster season so far. It's good to see all the new faces on the QS too, I've been having fun just watching the warm-up sessions, it's just like watching video parts all these guys are amazing."

Michael February continued his incredible run through the South African leg, and even got the growing crowds on the beach excited with his aerial prowess in the opening heat of Round Three. Mikey was under pressure in last position when he launched into an impressive rotation projected forward onto the shoulder, and completed the job with a somewhat conservative reo on the closeout. The score came in as an 8.83. Mikey quickly put another average score on the board to get in the lead. Eventually Alejo Muniz managed to squeeze back into first, and the South African advanced into Round Four in second place. 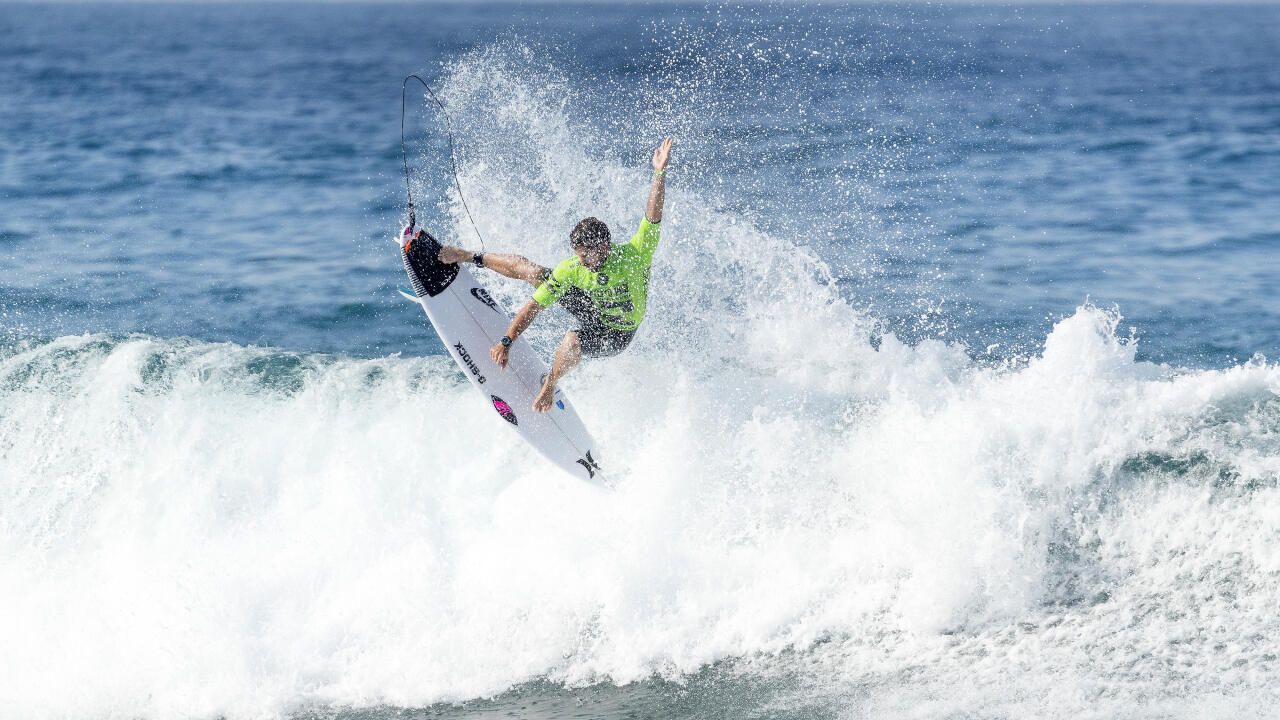 "It feels amazing having everyone screaming on the beach," he said. "It is like a little extra pressure, but when you do need to perform it definitely gives you a bit of confidence cause there's so many people behind you. We don't really have this anywhere else in the world, so it'd be nice to capitalize on it in this event."

Samuel Pupo is Miguel's younger brother, an uber-talented 16-year-old who's on the right track to join the elite Championship Tour down the line. He won the Junior division of the Ballito Pro last week and just advanced into Round Three of the main event today. "It was my first win in a Pro Junior and it made me feel great and confident for the main event too," he said. "Last year I got a good result in Haleiwa and I managed to get in these big events already. I definitely feel more pressure now, surfing against all those CT guys, but I try to keep my surfing light and fun. I want to surf the way I like, going for big turns and big airs." More people join the fun every day on the beach. - WSL / Kelly Cestari

The two Pupo brothers are not only progressing through the rounds in Ballito, but they're making a healthy bid to support the Waved Foundation, a Panamanian non-profit that raises funds to support education in the developing country via improvements in school infrastructures, English classes, as well as swimming and surf lessons.

"One dollar per wave I surf in this contest is going to go into a fund for local schools in Panama and Brazil, so it's a good cause and being able to do what I love and help out at the same time is awesome," he added. "I'm going to catch as many waves as I can and hopefully make more heats, it's just one dollar, which is nothing for us, but can go a long way there." Michael Rodrigues finds a cheeky barrel and heads on to Round Three. - WSL / Kelly Cestari