In 2007, Arica received global attention after hosting a Championship Tour event as part of The Search global series. The Final, featured legendary surfer Andy Irons (HAW) earning a perfect 10 from the judges to defeat Damien Hobgood (USA) in a seminal performance.   Fast forward ten years and the waves at El Gringo and the surrounding region have been mainstays for adrenaline-hungry surfers.   Following a lay day on Monday, conditions improved in Arica, Chile for the start of the 2017 Maui and Sons Arica Pro Tour presented by Corona & Canon. Tuesday morning began with an overcast sky and light winds, yielding glassy conditions in the morning. Round 1 hit the water and ended after Heat 11 as double overhead sets provided gaping barrels, gnarly wipeouts and last second heroics at the Men's QS 3,000 event at El Gringo.   After a historic cold front left Chile snow ridden, the receding storm left the waves in the line-up in a transitional period, with several sets closing out and frigid water temperature. In Heat 1 of the day, Danny Fuller (HAW) showed his expertise in barreling waves by advancing in 1st place into Round 2 along with former event winner Alvaro Malpartida (PER). "I was really concerned yesterday because the waves were super big and since we don't have much time, I was figuring they were going to run it, but things looked a lot cleaner this morning," said Fuller. "It's my second time here and I feel like I know this wave well, but it was still kind of hard to find two good ones. I was lucky enough to win that heat and I'm going to hold on to my high scores for the next round. I love this region, the people are super friendly and I love this wave…it's like the South American Pipeline," concluded the North Shore local. Fuller will now face Lucas Silveira (BRA) and Skip McCullough (USA) in Round 2.   In Heat 8 of the day, Pedro Neves (BRA) scratched into a bomb and earned an 8.67 after getting blasted out of a heavy lefthand barrel. Despite receiving the highest single wave score of the day, Neves had trouble finding a quality back up, but still advanced with a 10.30 total. The lone Greek surfer in the event, Alex Maniatis, moved on in 2nd place, eliminating Gerald Alvarez (CHL) and Luke Adolfson (HAW).

"I was lucky enough to catch that wave (8.67) at the beginning of the heat and it gave me some more confidence," stated Neves. "It was a super late drop and I really had to accelerate down the face and back-doored the section before getting spat out. I competed here last year to get to know the wave better and since it got upgraded to a QS 3,000, I thought it would be a good opportunity to move up in the rankings."   As the tide moved in, conditions reached a climax in Heat 9 as Nicolas Vargas (CHL) scored a 6.00 and an additional 7.00 for the highest heat total of the day with 13.00 points. "I'm really happy that I won that heat," said Vargas. "There were some good waves, but it's still not the typical El Gringo as we know it. I caught a good one at the start and then with like three minutes remaining, I got that barrel for a 7.00 ride."   Despite living in Chile, Vargas doesn't always get the chance to surf heavy breaks like El Gringo, but he knows the key to performing well in Arica.   "I only get the opportunity to surf waves like these when I come here to compete," continued Vargas. "I don't think it's a very difficult wave, but you need the right mentality to surf it." 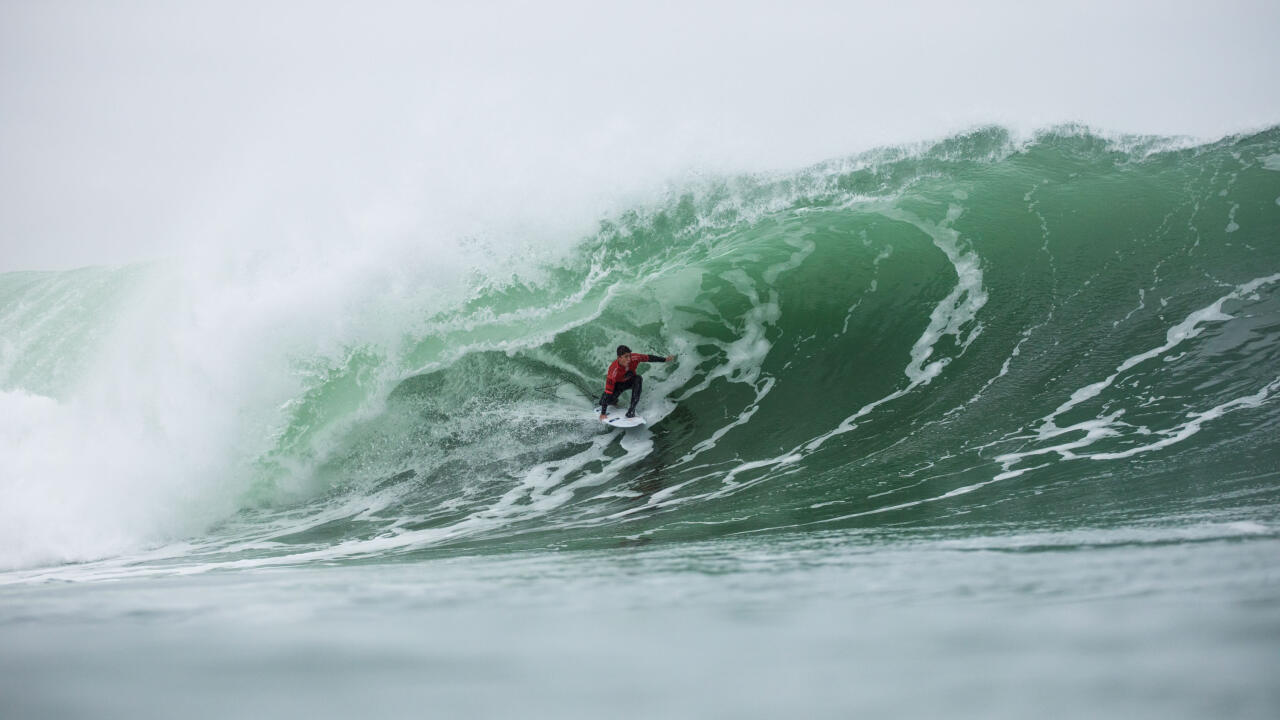 Like clockwork, as noon approached, so did the onshore wind. A heavy reefbreak like El Gringo becomes unmanageable, and frankly dangerous, as the waves begin to pinch and closeout with unfavorable winds. Event organizers acted quickly and put the contest on hold after Heat 11. Young Australian Ty Watson luckily advanced in the last heat of the day with only a 4.27 heat total.   "There wasn't too much on offer in that heat and I only snuck into a few waves. I didn't even get barreled, so it was a bit disappointing after seeing good waves all day, but the wind has changed and things have gotten a bit funkier. I've been watching all the guys get barreled and it's really exciting," declared Watson.