Rarely in life are there moments of sheer magic. Those elusive times when something extraordinary happens. Where mind, preparation, time and body all align, for extraordinary results. And where an underdog rises, triumphant, beyond their wildest dreams.

But today in Huntington Beach was that moment for Sage Erickson. The California native won the Vans US Open of Surfing - Women's CT, after a week in which, in her own words, she knew it was time to shine. It was Erickson's first-ever Championship Tour (CT), and a massive coup after a long, bumpy road on tour, off tour, and on yet again. For years, Erickson relied on her lower-tier rankings to stay on the elite tour, scratching her way back every time.

Sage Erickson Makes a Huge Leap in Huntington Beach
2:06
With a huge win over Courtney Conlogue in the Semifinals, Sage Erickson is now up where many believe she belongs.

So it's not a reach to suggest that, as bodies crushed together around her on the beach, flesh pressed against flesh to catch a glimpse, an autograph -- anything -- and Erickson's friends chanted her name, the achievement had yet to sink in.

"Holy crap, I don't even know what's going on right now," she said. "I had the best wave to start and I just blew it so hard and just told myself 'It's okay, don't worry.' Then I thought, 'Wait, it's kind of lully, maybe I should've worried about that.' I...could hear [my coach] Tom [Whitaker] in the back of my head "Don't you dare stand up unless it's a good wave, especially at this point" I got that last wave and I don't know exactly what I got, but this feels like a dream.

Tatiana Weston-Webb Surges to Final at US Open
1:43
Despite narrowly missing a second consecutive win in Huntington Beach, Tatiana Weston-Webb was cognizant of what victory meant for Erickson, asking, 'How can you not be happy about that?.'

"I'm in complete disbelief and can't thank everyone enough, Tom has just believed in me so much the last two years. I feel like I've been working really hard for a moment like this and something felt really special about this event, really comfortable and just aiming high. I can't believe I'm here. I'm not World Champ, it's just the US Open, but it still feels like that so I'm going to celebrate it like I am."

Erickson, long an underdog on tour, had to battle some Goliaths on her way to the win here. Earlier in the event, she scored mini-coups, taking down three-time World Champion Carissa Moore and World No. 2 Sally Fitzgibbons. And Sunday, things only got tougher with a dropping swell, making wave selection and an intimate knowledge of the Huntington Hop keys to success. First, in the Semis, Erickson faced Courtney Conlogue, perennial runner-up for the World Title, powerhouse surfer, and nearly local status. Which is all to say, under normal circumstances, most bets would be on Conlogue. But those bets would have wrong. Early on, Erickson wrested the life out of a wave and its reform for a 7.50, one of the highest scores of the day, and took over the lead. And while Conlogue is formidable -- a beast of a competitor in any conditions -- she couldn't muster a big enough score to get it back. 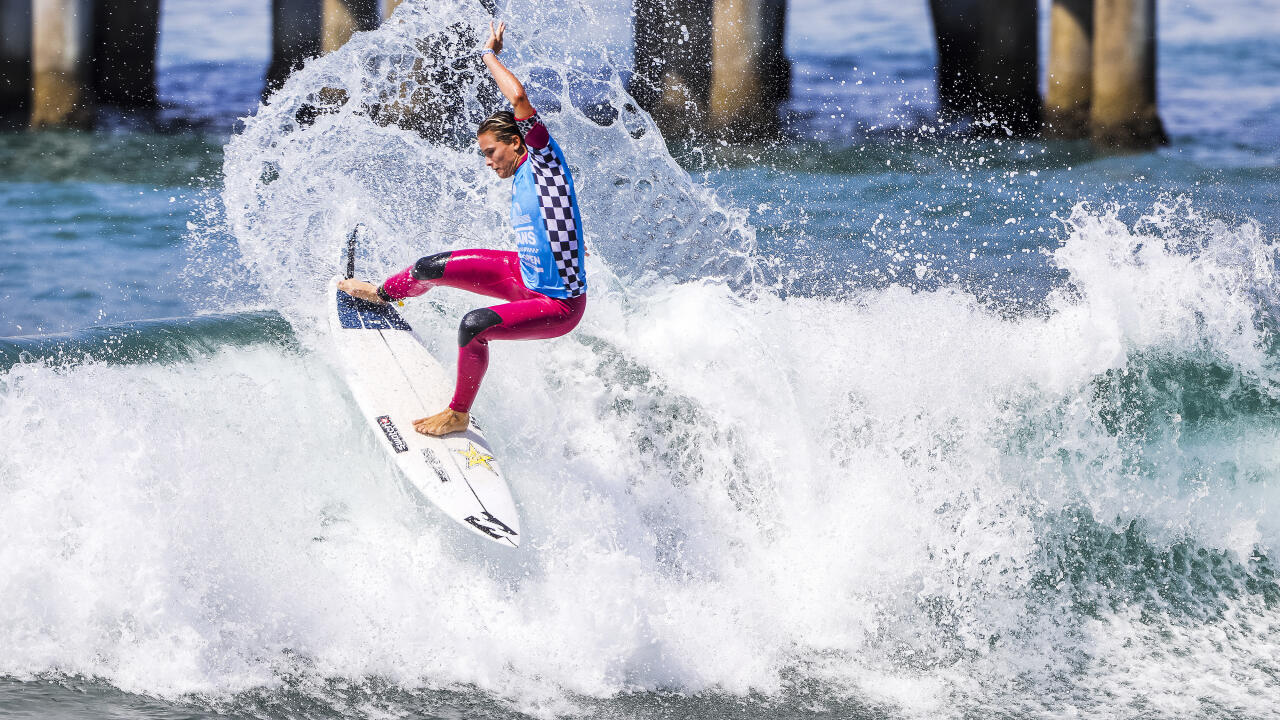 Courtney Conlogue wasn't able to get past Sage Erickson in their Semifinal heat. But that was after three contest wins in a row -- not too shabby. - WSL / Kenneth Morris

The uphill battle didn't end there. The Final pitted Erickson against Brazilian-born, Kauai-reared Tatiana Weston-Webb. Weston-Webb won the Vans US Open last year, and practically had a spot ready on her Hawaiian mantle for another. With under three minutes left, Weston-Webb had the lead, the waves had gone flat, and her win seemed imminent. But then, she took off on a small one that didn't pan out. As she worked the mushy inside foam, though, Erickson had her chance out the back. She jumped on a set wave as the seconds ticked down, and as she pounded on her board to make the reform, her profound desire to win, finally, was palpable. She came out of the inside on her feet to the roar of the fans, and her fate was sealed. 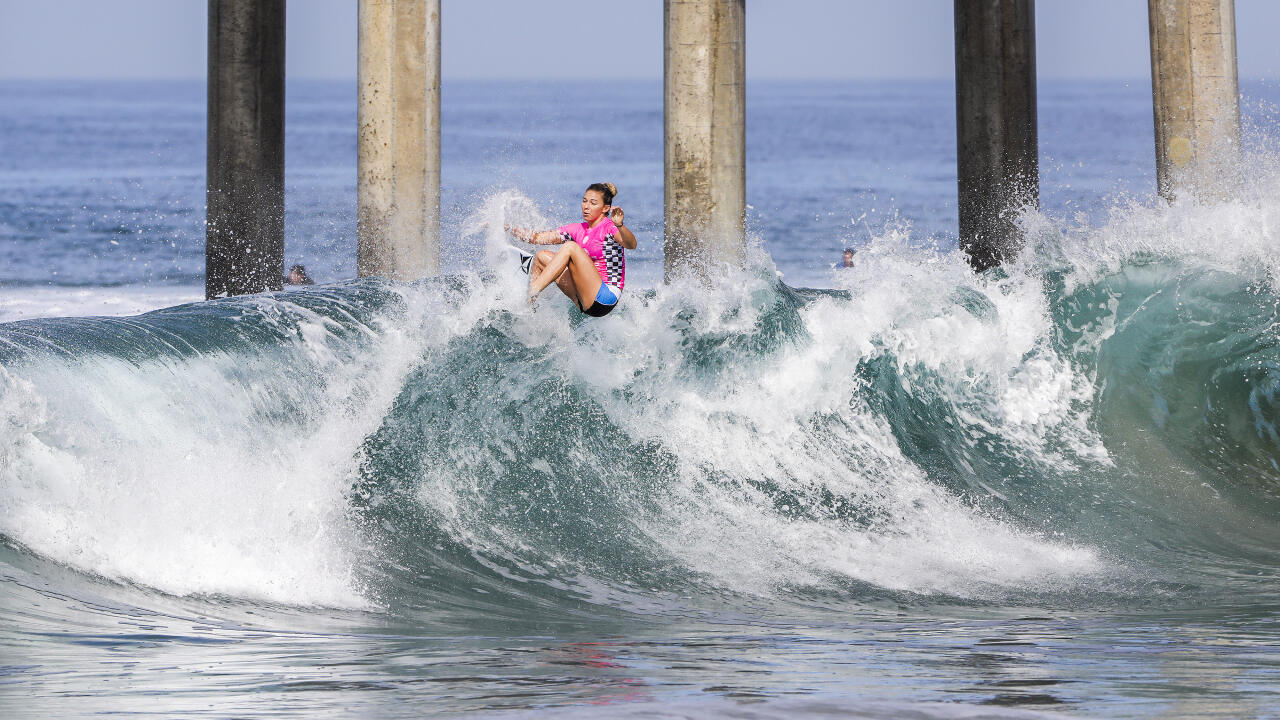 Coco Ho had a great week in Huntington. Her third place finish was the best yet in 2017. - WSL / Sean Rowland

Before the fanfare, the contest's other emerging star, Coco Ho, surfed her first CT Semifinal of the year, against Weston-Webb. The magic that had propelled her (otherwise known as hard work, determination, and, maybe, a bit of fairy dust in the air), had faded. Weston-Webb surged ahead, comboing her fellow Hawaii local, and sending her home. Still, Ho's performance at the US Open was remarkable and, hopefully, was glimpse of things to come.

The CT women compete next at the Swatch Trestles Women's Pro, Sept. 6-17. That gives Erickson exactly a month to savor what she called "a dream come true," and the sweet reward that came from newfound confidence, an increasing focus on fitness, and the determination, put simply, to just keep going.

Lakey Peterson ripping at lowers, Billy Kemper takes out the Men's Ride of The Year Award, and Coco Ho keeping the vibes right at home.

3:46
- WSL
Sunday, August 9, 2020
Coco Ho Celebrates The Life And Legacy Of Uncle Derek Ho Before Competition At The Surf Ranch