Louis Venezia (pictured) and his family -- wife Lisa and daughter Bella -- have received outpours of love from the surfing community since the tragic loss of Zander. - WSL / Andrew Nichols

A very special finals day crowned Cole Houshmand and Kirra Pinkerton the first recipients of the Live Like Zander Junior Pro In Memory of Zander Venezia titles. A heart-driven event by all those involved culminated in two incredible finals that witnessed a San Clemente sweep at Soup Bowl.

The wins earned both Houshmand and Pinkerton their first-ever Pro Junior wins in amazing fashion. Conditions were tricky for competitors as Soup Bowl's shifting peaks continued to surprise, but the best was saved for last. Cole Houshmand's first-ever chair-up the beach at Soup Bowl will be one he won't soon forget. - WSL / Andrew Nichols

The men's Live Like Zander Junior Pro In Memory of Zander Venezia Final witnessed the waves turn on in the opening stages and offered one last flurry of waves at the end that ultimately earned Houshmand a massive win. It looked as though East Coaster Chase Modelski would run away with the Final after his first two waves accrued a 15.93 (out of a possible 20) in the first five minutes.

But, Houshmand spotted a wave with under a minute remaining, and in third priority, and took off on the left, needing a 9.60 (out of a possible 10) that went by both Che Allan and Tyler Gunter. The 16-year-old gouged the opening section on his forehand, then took to the air on the closeout and stomped a massive full rotation for a near-perfect 9.67 as the final horn blew seconds later -- emerging victorious. Cole Houshmand's prowess on the lefts began early on in the event and ended up being the difference maker. - WSL / Andrew Nichols

"That was such a crazy Final and to win my first Pro Junior event at Soup Bowl is amazing," Houshmand said. "The people, this wave, this place as a community is incredible and I can't imagine a better way to end this year. This win is so special just being in memory of Zander -- it's a big honor to earn this one." 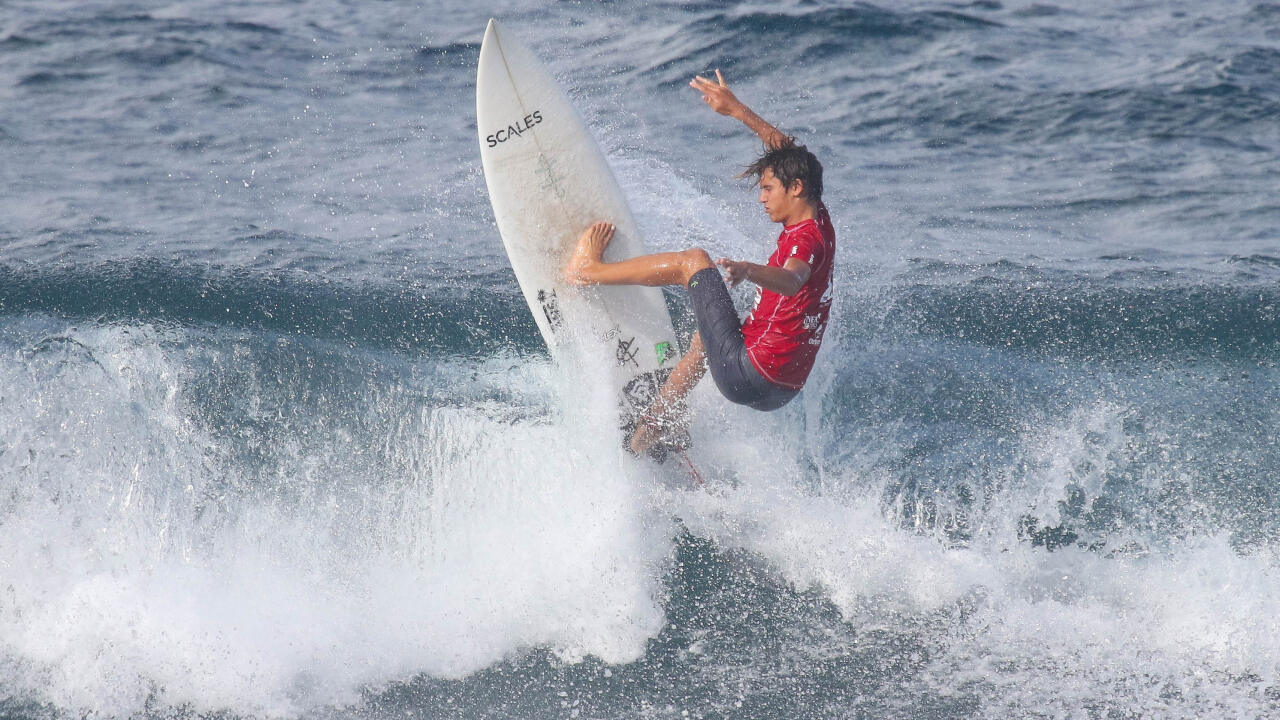 The Live Like Zander Junior Pro runner-up Chase Modelski opened up with an amazing start on a Soup Bowl gem. - WSL / Andrew Nichols

Modelski looked well on his way to the win, but a few mistakes ended up being his demise. It was still the Floridian's best result at the Pro Junior level and showcased a glimpse of the young surfer's potential. Modelski now looks forward to another year among the Junior Tour ranks and a chance to mold his surfing even further.

"Those waves just came to me right at the beginning and I was so happy to get that start," Modelski said. "I screwed up with priority a few times, but I wasn't too worried about it -- I've never even made the Semifinals so this amazing. It'll be great to work on my strategy a bit more since I haven't really done that, but I'm more focused on just bettering my surfing." Tyler Gunter fulfilled his goal of earning a spot among the Top 4 with a third place result with clutch performances to edge out No. 4 Luke Gordon. - WSL / Andrew Nichols

With Gunter and Allan both making the Final, each of them have punched their tickets to the World Junior Championships as Allan finishes ranked No. 3 and Gunter No. 4 -- joining North America Regional Junior Champion Ryland Rubens and No. 2 John Mel. Kirra Pinkerton's win capped off the San Clemente sweep and made a jump up the rankings. - WSL / Andrew Nichols

The junior women had a remarkable Final of their own prior to the men's in which Pinkerton take down No. 1 ranked Alyssa Spencer, No. 2 ranked Samantha Sibley and an in-form Rachel Presti.

Pinkerton's incredible Finals performance earned her a first-ever Junior Tour win at the Live Like Zander Junior Pro In Memory of Zander Venezia. The San Clemente, California, native opened up with a near-perfect 9.50 right away on her aggressive backhand and backed it up moments later on her forehand to apply serious pressure. A nail-biter ending witnessed Alyssa Spencer earn a 7.50 on her last wave in the dying seconds that would've given her the win, but Pinkerton responded one last time with an 8.33 to claim a huge victory. "It feels amazing to win my first junior event and to do it here is extremely special," Pinkerton said. "I saw a left that Rachel got in her Semifinal heat and when that left came in the beginning I just had to give it a shot which worked out great. This event means everything to me and I'm donating my prize money to the Zander Venezia Foundation. I miss him so much and this is for him. I'll start to get ready for Worlds and keeping training, but I'll enjoy this moment for awhile." The win also propels Pinkerton ahead of Sibley for a bid into the World Junior Championships at Kiama, Australia, in January alongside the North America Regional Junior Women's Champion Alyssa Spencer. Spencer secured her place at No. 1 with a Finals appearance and received the Regional Champion's Award that has been dedicated to Venezia. The Carlsbad, California, native returned to Soup Bowl in great form after being eliminated in the Quarterfinals of last year's event and losing the No. 1 spot, but the 14-year-old wouldn't let that happen again.

"To get it this year is really special after I came so close, so it's really cool to be going back to Worlds as the Regional Champion," Spencer. "This event as a whole was extremely special and I wanted to get a win for Zander, but second isn't too bad and I'm happy with that."

In honor of Zander, the Venezia family founded the Zander Venezia Foundation to aid disabled and underprivileged children throughout Barbados. Donations can be made here: http://www.gofundme.com/livelikezander.

"Zander's short, but incredible time here on Earth has had a ripple effect on so many people, crossing borders of nationality and age," Zander's father, Louis, said. "All the donations will go directly to helping these children that Zander was touched so deeply by, causing that ripple effect to become a tidal wave of love for the less fortunate."

More information on all the North America Region Tour Champions will be sent after the final men's Qualifying Series event at the Pismo Beach Open November 17 - 19.