If such a thing exists as a sneaky win, Conner Coffin snuck up on everyone and took out the 2017 Vans World Cup at Sunset Beach. The lineup at Sunset is a big canvas and Coffin paints in broad strokes with a vivid palette, placing turns in critical places and burying his rail with new-school power. And yet, he's a surfer inspired as much by the traditional, stylish power lines of Taylor Knox and Brad Gerlach as he is by postmodern aerialists like Dane Reynolds (not that Reynolds is lacking in the power department).

"I've been coming over to Hawaii since I was 12, I just love surfing here," said an emotional Coffin after taking the win. "It's always been a dream to win in Hawaii, I struggled with contest results in the past, but always had so much fun surfing here I knew I'd put it together at some point."

The Californian, currently ranked No. 21 on the Championship Tour, has a strong affinity for the North Shore. Home may be Santa Barbara, but the Coffin family has had a second home on the North Shore for over a decade. Conner, along with his younger brother Parker, have used their experience spending winters in heavy surf to launch themselves onto surfing's world stage.

"It meant so much to have my brother here," he said, reiterating multiple times the importance of sharing the victory with his younger sibling. Coffin's victory over two other Californians, Kolohe Andino and Griffin Colapinto, and as well as Australian Wade Carmichael was the capper to a pressure-packed final day of the Qualifying Series -- a day with an abundance of compelling stories full of Championship Tour (CT) qualification and Triple Crown title implications.

Colapinto and Carmichael had especially significant days in their young professional careers.

Carmichael started the day on the cusp of qualification, but needed to progress through at least two rounds to avoid a repeat of his 2015 qualification misfire. He's been flirting with CT qualification for the past few years, suffering a crushing near-miss in 2015 after winning the Hawaiian Pro that winter. Looking like a mirror image of the original Keg on Legs, legendary Aussie CT surfer Mick Lowe, the husky lumberjack from Avoca Beach, NSW, did better than that. By finishing 3rd, Carmichael made the Tour, and his aggressive approach will be a breathe of fresh air on the CT next year.

"I don't know man, I just wanted to make some heats today and do some good surfing and I finally got a couple good waves, it feels good," said a teary-eyed, gobsmacked Carmichael. "Yeah, it's a dream come true. I've been trying so hard, I finally got a real good crack at it and it came true, I'm stoked man."

If Carmichael had a day for the ages, Colapinto, the 19-year-old shooting star from San Clemente, Calif., might have done him one better. His 4th place finish at Sunset not only put him atop the Triple Crown ratings list, it boosted him into the top spot on the New Era QS rankings, overtaking Jesse Mendes on the last day of the year. 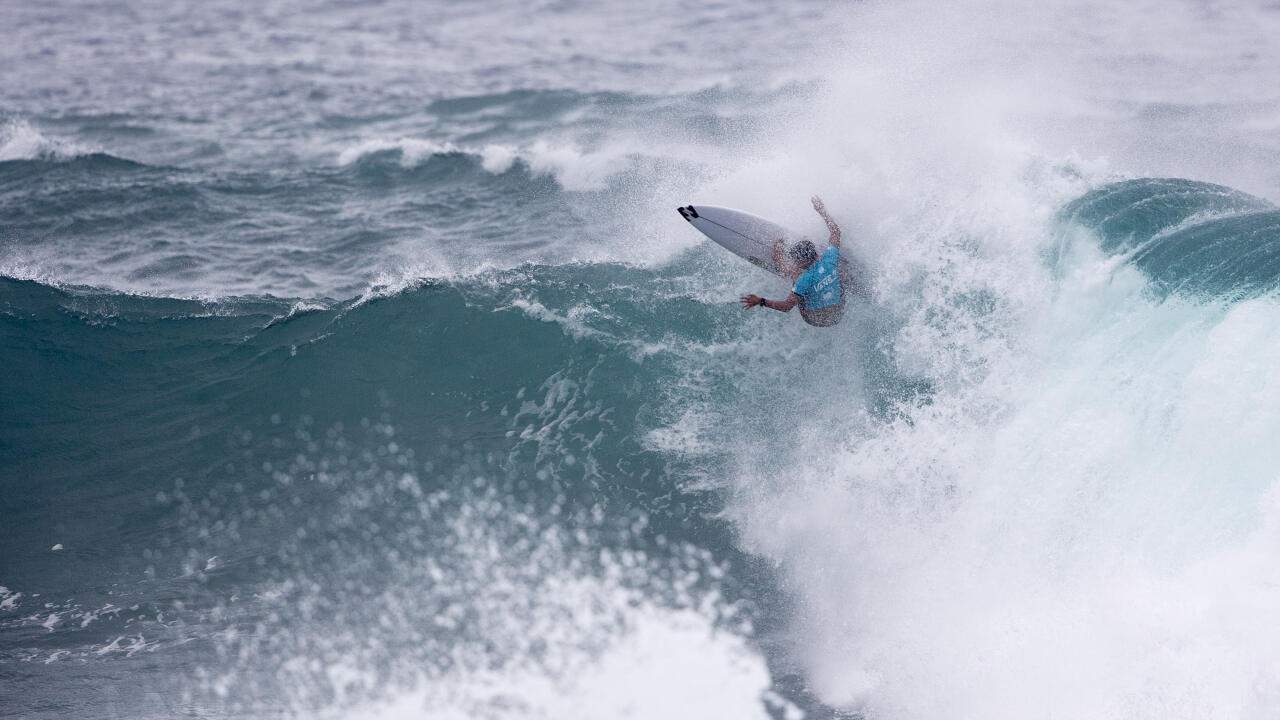 Although Colapinto didn't reach his goal of winning a QS event this season, he was still over the moon with his performance on a climactic day full of intrigue. "I'm really stoked to make a few heats at Sunset, I haven't really gotten a result out here before, but I've always felt like I surf good out here, now that I'm starting to make heats it feels good, I'm happy."

Of significant note regarding the 2018 CT qualification hunt, two of the happiest surfers on Oahu (maybe the planet?) have to be Keanu Asing and Ezekiel Lau. The two Hawaiians were forced to watch other surfers decide their qualification hopes, biting their nails like a couple of dead men walking waiting for a last-minute pardon. In the end, the Hawaiian surf gods granted them a reprieve. They'll both be on the CT next year. 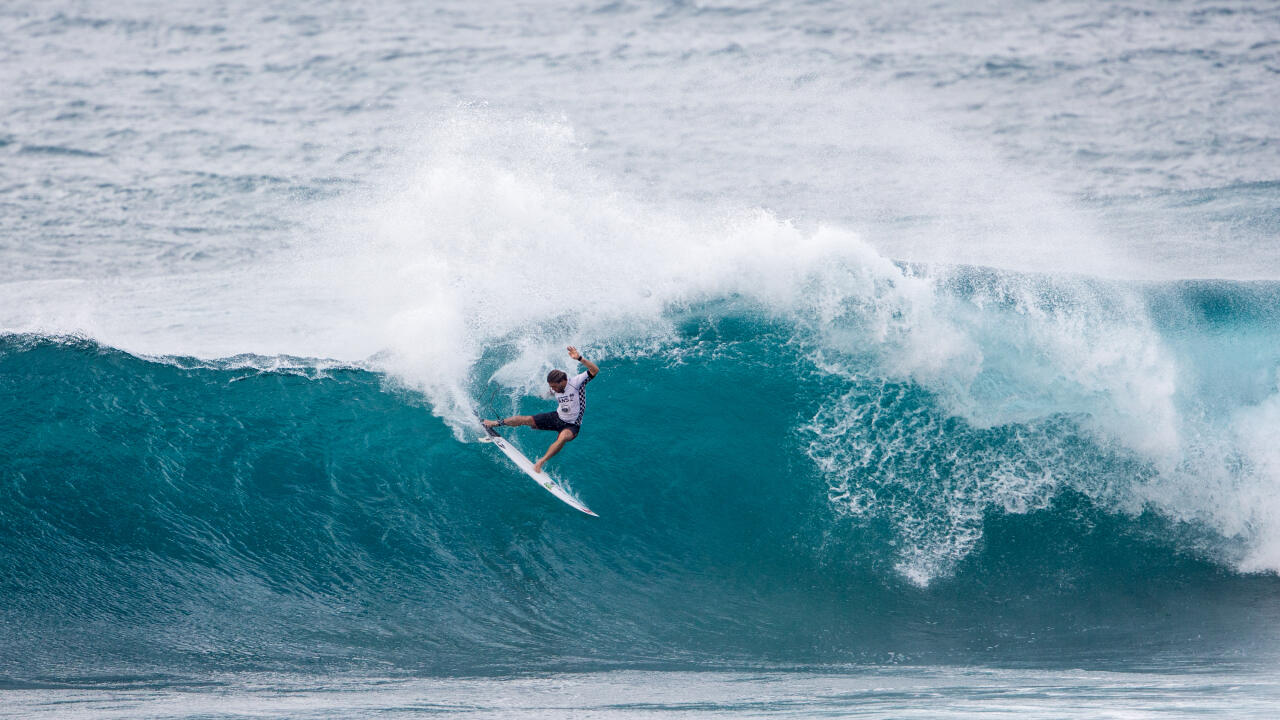 Interestingly, Coffin elected to give the vast majority of the Qualifying Series the miss this year. The Vans World Cup was just the third QS event that he surfed. Heading to Pipeline, he's ranked No. 21 on the Jeep Leaderboard, which means he's still at risk for making the Top 22 cut on the CT. His win today moved him to No. 25 on the QS rankings.

Meanwhile, Kanoa Igarashi and Italo Ferreira both have a great shot of double-qualifying at Pipeline. If they do, that will open the door for two more Qualifying Series surfers. The first one in would be Brazil's Michael Rodrigues, the next would be Californian Patrick Gudauskas. Gudauskas made a valiant effort at breaking into the Top 10 during his heats today at Sunset. He tore through his Round Four and Quarterfinal heats. Needing to make the Final to guarantee a CT slot in 2018, he went for a massive re-entry on a meaty Sunset closeout section on his final attempt. The detonation at the bottom proved too violent, however, and his shot was blasted away.

Still, all hope is not lost. Gudauskas and Rodrigues will be down at Pipeline next week ready to cheer on Italo and Kanoa. The Billabong Pipe Masters event window opens December 8.