Italo Ferreira and Carissa Moore have won surfing's first-ever Gold Medals, more than a century after Duke Kahanamoku spoke about his desire for the sport to be included in the Games.

This was a historic moment, and the culmination of so much hard work for both these athletes -- each a defending WSL World Champion. Especially in Ferreira's case, this was the peak of a fairytale story which has been him go from learning to surf on a foam cooler lid to earning the highest honors in the sport he's so passionate about. This was a magical moment for Italo Ferriera - Sean Evans/ISA

And for Moore, it was a singular achievement which stands out despite already owning four World Titles. How fitting that a Hawaiian, from surfing's birthplace, has the chance to be such an amazing ambassador for the sport on a truly global stage, in a way that would make Duke -- the father of modern surfing -- proud. 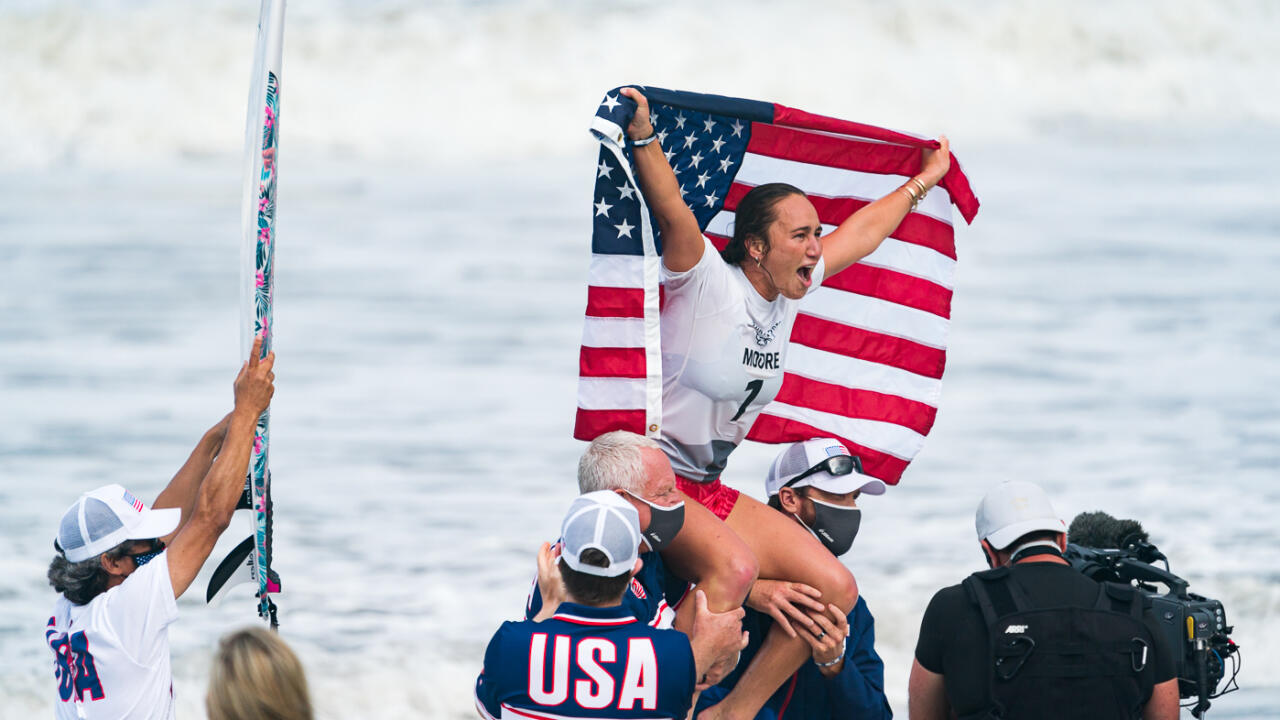 Wrapping Up In Tokyo

After the event concluded, athletes had time to take in the atmosphere in the Village before departing.

Kolohe Andino and Caroline Marksfrom Team USA and Michel Bourez from Team France were among those making the most of the experience before re-setting their sights on the Championship Tour, which resumes August 10 with the Corona Open Mexico presented by Quiksilver.

Julian Wilson was knocked out of the event by Gabriel Medina, who in turn was eliminated in the Bronze Medal heat by Australia's Owen Wright.

Wilson had earlier announced a step-back from professional surfing, and that he was putting all his eggs in the Olympic basket, so the loss had to have stung. But the mark of a true sportsperson is being gracious in defeat, and Julian, as we can see, is all class.

He gifted Medina a green-and-gold board and had some gracious words for the two-time Brazilian champ, while Medina gave him one of his Johnny Cabianca shapes.

"Thank you for pushing me to find better than my best my whole career on the World Tour," Wilson said. "Massive respect for you, your family and your contribution to surfing at the highest level."

Now that the Olympics has concluded, athletes will be refocusing on the resumption of the Tour, which is returning to Mexico and one of the world's great pointbreaks, Barra de la Cruz.

While Olympic athletes have been focused on Tokyo, others have been posted up in Mexico for weeks, scoring some great waves.

Among those was Australia's Wade Carmichael, who seems to have made the most of the extended break between CT events.

Others have been enjoying waves in California, and putting in some work outside of the water to make sure they are ready to go once the Tour resumes, including Sage Erickson.

With only two events to go before the first-ever Rip Curl WSL Finals, this is make or break for the athletes sitting just outside of the WSL Final Five -- names like Caroline Marks and Tyler Wright, or Kanoa Igarashi and Conner Coffin.

The waiting period for the event begins in less than two weeks, so get ready to see some of the world's best surfers on a world-class right-hand pointbreak -- the first proper right-hand point we have seen all year.

The Fight For The WSL Final 5 Hits The Corona Open Mexico pres by Quiksilver
0:16
With just two events remaining, the Championship Tour makes its much-anticipated return to Mexico and the famed Barra De La Cruz.