Despite less-than-ideal swell and weather conditions stirred up by the north Pacific at two of the globe's premier big-wave spots, both Pe'ahi and Mavericks produced memorable sessions yesterday. Pe'ahi, specifically, was the scene of a number of epic rides (Aaron Gold, Nathan Florence and Russell Bierke) and some brutal wipeouts (again, Florence). But it didn't take long for a Jaws local and one of the best big wave surfers on the scene today, Albee Layer, to stir up a social media brouhaha while assessing an especially crowded lineup, which may or may not have been juiced-up by a positive long-range forecast. "Couple things: We know less than we think about forecasting. Jaws isn't a tow wave anymore on glassy days. WITH 60 SURFERS THERE WERE 2 HIRED SAFETY GUYS AND ABOUT 15 SKIS DRIVING PHOTOGRAPHERS. THIS IS ABSOLUTELY UNACCEPTABLE AND WE NEED TO FIND A WAY TO FIX IT! Also, there was a lot more balls than brains out there." Later adding, pragmatically, "Let's work together to fix this because it puts everyone in danger including those of us who hire water safety."

Layer's self-proclaimed "rant" highlighted an ever growing concern amongst the big wave community -- mainly, what should be done about water safety in the current state of rapidly increasing crowds both in the lineups and in the channels?

Layer isn't alone. Mavericks legend Grant Washburn recently raised his own concerns while deliberating on the Mavericks Challenge selection process. "A lot of frustration from the older local crowd is that these guys are coming from elsewhere and they just sell out into the biggest wave that they can and then just blow themselves up," he said. "Then they get rescued immediately and get brought right back out. So you're taking up a bunch of waves that other people would have wanted and you're really endangering everyone by that approach." While the weather was a bit spotty, Mavericks had its moments on Monday. - WSL / Frank Quirarte

The biggest culprits -- multiple-use inflatable vests, hyperbolic press coverage, social media notoriety -- appear to have created an Internet-age conundrum: Are the very same things that are pushing the boundaries of big wave riding making the sport more precarious than ever? There is little doubt that this debate will rage on as big-wave heroes and unknown soldiers struggle to strike a balance between free access for all takers and a safely controlled environment for pros to advance their craft.

Response was swift and ran 90 percent in the affirmative to Layer's concerns (all responses below are intentionally unedited to preserve writer's context, except for foul language). Here are a few of the best:

Maui local, Kurtis Chong Kee of Skullbase Water Safety, was one of only two PWC safety teams in the lineup for part of the session: "Thanks Albee I couldn't agree with u more at one point today it was only me and Ollie lucky he had my back as I had his pretty f--ked up seeing 50 surfers and only me and him to help them all ! To me IF U GOT THE BALLS TO GO OUT THERE HAVE THE F--KEN BRAINS TO HAVE SOMEONE WATCH OVER U ! And thanks to Daniel for the help too he helped a lot as well but, some of these guys need to wake up!!!!! We try our best but we can't save everyone, much love brotha! @live.fast.die.old" The pack at Jaws is getting thicker every year, which is a growing concern. - WSL / tony heff

IG follower Kyle Weiland led the prevailing counter-narrative: "The photographers and videographers are the ones that make it possible for you to make a living surfing. If you are complaining about how surfing big waves is dangerous why don't you quit and get a job like the rest of us?"

While shaper Matt Kinoshita of Kazuma Surfboards, meanwhile, cut straight to the point: "Safety skis are for those who hire them. You paddle out at your own risk and you can't expect anyone to save you unless you have planned ahead. It's simple. Can't handle it yourself then you should not be out there. I feel bad for those on skis risking their lives and money to save someone that should not have been out there. The truth is that the guy on the ski rescuing people has the most dangerous job out there and the highest odds of things turning bad." 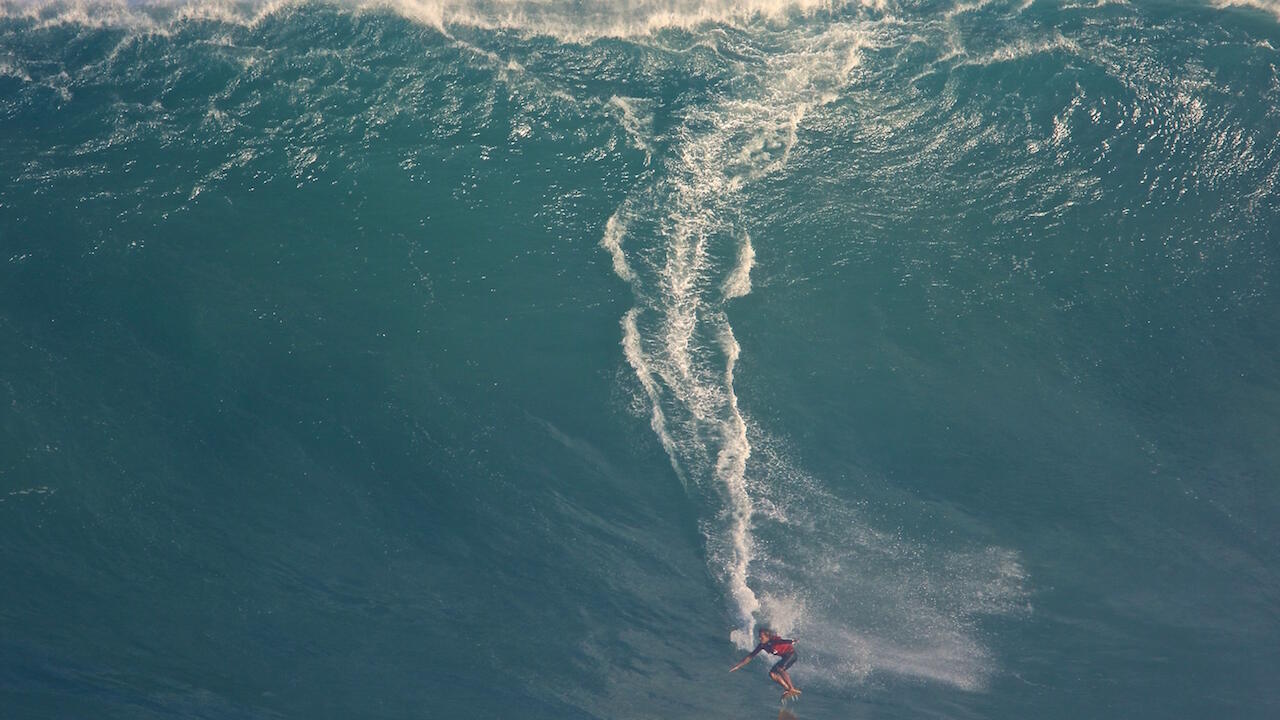 Kai Lenny, under prussure and above the fray. - WSL / Dooma Photos

So, too, did Shane Dorian, while sneaking in a sarcastic parting shot at Albee: "@kazumasurfboards I agree totally, I trip out when people just jump off the rocks with no safety plan in place and just expect to get rescued. I see those same guys waiting for safety skis to show up before catching waves in the morning. It's a zoo out there @live.fast.die.old and it's pretty much all Albees fault for making it look so easy and fun."

Finally, legendary photographer Tom Servais made his case for the photogs: "Too many surfers just show up expecting to get free help from whoever is running water safety skis. But they certainly don't want to pay for the ski if the driver loses his ski trying to save the surfer, and lots of times their board, too. If the photogs can line up a ski, why can't the surfers. Surfers should have a pocket full of $100 bills to pay for pick ups if they don't have their own safety ski. And the photogs aren't exactly rich either! Good point @live.fast.die.old, and it's not a new problem."

Defending event champion Carlos Burle comes out on top of the final heat of the Quarterfinals.