By any measure, Kelly Cestari has a dream job. As the lead photographer and Digital Imaging Manager for the World Surf League, he travels the world, spends his days between the beach and a mobile office, and rubs shoulders with some of the best surfers alive. It's the stuff of which childhood (and adulthood) dreams are made. And yet, it came close to not happening at all. During Cestari's first trip to Tahiti, in 2015, it rained for 10 of the 12 days he was there. That didn't stop him from being happy, though -- or from soaking up views of the mountains about which he'd dreamed for years. - WSL / Kelly Cestari

"I used to work in IT, before a snowboarding trip went wrong and I ended up snapping my femur four weeks into a full season in Vermont, USA," said Kelly. "I went back home to South Africa, unable to surf, but I didn't want to spend my recovery sitting on the couch. So I bought some equipment with money saved up over three years working in London, and I traded lifts to the beach for photos with friends."

And no -- the rest is not history. Not yet: From there, after extensive practice, Cestari approached Pierre Tostee, a fellow South African who was director of then-ASP photography at the time, and asked if he would review his growing portfolio. "My initial hopes were dashed with some constructive criticism," Cestari recalled. "A few months later, though, I approached him again. That led to helping him on a few local non-surfing events, which led to me assisting him on international events, and then, in 2007, covering a women's surf event in Spain on my own. That solo event led to more, bigger events."

Twelve years later, Cestari is still part of the WSL family, capturing some of the biggest moments in surfing, from the beach to boats and everywhere in between. As the first in our new series, Cestari shared a handful of his favorite photos, and why they stand out from his considerable body of work, in his own words. "This is not actually Pipe, even though it looks like it. I was shooting some freesurfing at Backdoor on a bit of a mixed-up swell with a slight but constant current pulling toward Off-The-Wall, which I was doing my best to avoid. There were waves all over the place, until this left at Off-The-Wall. I had never seen a more perfect wave." "John John Florence winning his first World Title in Portugal in 2016. No matter how many of these celebrations you cover you still get nervous, lecturing yourself, 'Don't mess it up. Don't mess it up.' Everyone loves winning but when it's something they win for the first time there is an extra bit of emotion. Space is cramped and everyone wants 'the shot,' so everyone is doing their best to read the situation and get in the best position. I thought I had missed the best moment -- smiles and possible tears of happiness -- until John had enough of the champagne being sprayed in his face and turned for cover, giving me the photo I was after. ....Thanks John." 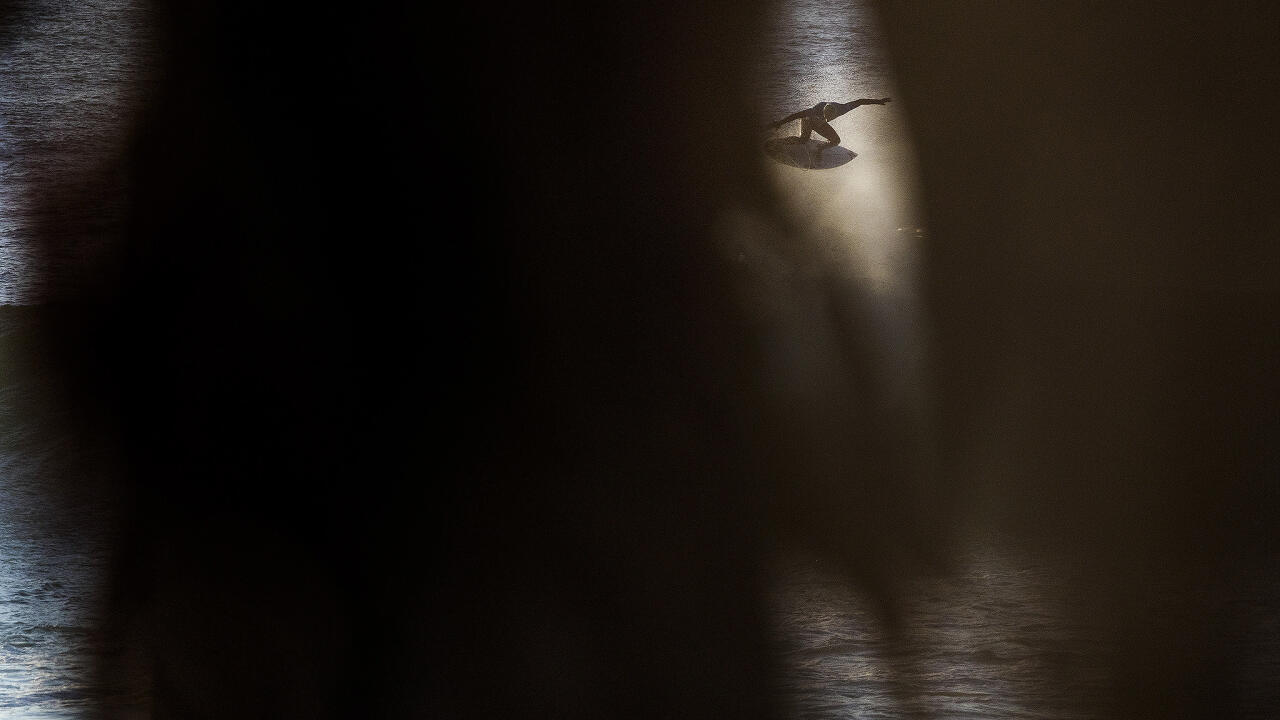 "This was the second air of Filipe Toledo's second perfect 10 of the heat. Jeffreys Bay has a multitude of angles to shoot from, I'd just bought a new lens before the event and was loving the ability to shoot tight and then pull back all on one wave. I was on the walkway trying to get some foreground when Filipe took this wave. Tracking him and knowing eventually the aloe plants were going to get in my way I managed to find the smallest gap I could shoot through (a 'chameleon eye'). Part planning and part luck worked out for something different. 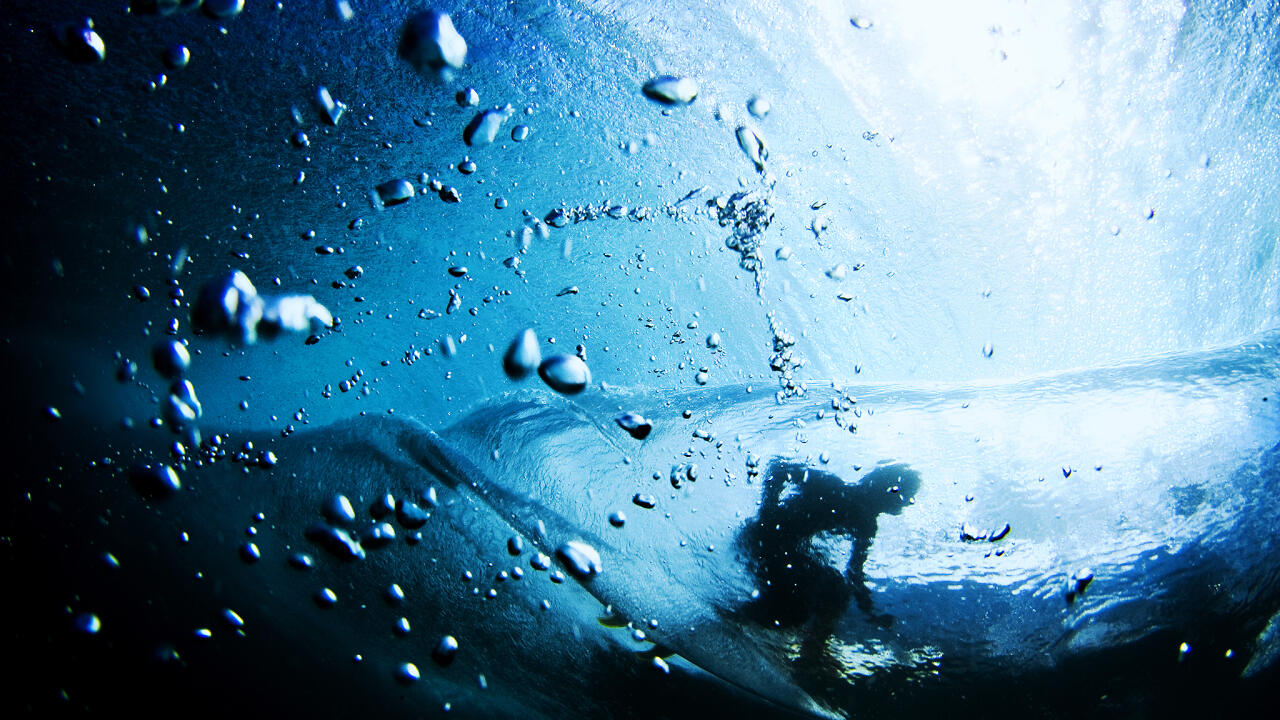 "I love shooting underwater, since this photo sparked that joy in 2008. At the time I had no controls on my water housing so there was no instant review. The best I could do was set the camera to hold on the last frame, and I thought I had ruined it because of exhaling right before squeezing the shutter, and I scolded myself the rest of the time. That feeling changed, though, once I was on dry land reviewing the photos. The bubbles actually help make the moment." "2017 was the return of both Owen Wright and Bede Durbidge to competition. With the hype and attention surrounding them, Bede had only just finished interviews when Owen got back to the locker room after winning his first heat back. To get a photo of both in a moment of pure happiness together -- after each having a year off from injury, filled with uncertainty about their competitive futures -- makes this one of my all-time favourite photographs." "My first trip to Fiji was an exciting one because it had taken me 10 years of documenting the Championship Tour (CT) to get to cover the event. You're either shooting from the photo boat, which is in the main lineup, or you are shooting from the ferry. This is from the ferry, which is in the safety of the channel, and allows for a higher, pulled-back angle. That worked out great for this photo of Kelly Slater." "There is always a great deal of excitement when a new event gets added to the calendar. This was the first edition of the Pe'ahi Challenge, in 2015. The excitement and nerves while waiting in the dark at 4 a.m. at the boat ramp was almost too much -- and I wasn't even riding the waves. If the cooler box of drinks and food falling off the boat on the hour-long ride out seemed like a bad omen, it was wrong: I spent the day shooting from the ski and loved every minute of it. Even the ones where I was telling my ski driver, 'We don't need to be so close,' and asking him to pull back a bit." "John John's second World Title celebration was in his backyard. Unlike the first in Portugal, when he was in the competitors' area and I had no restrictions getting to the celebrations, his backyard had some lockdown on it in the buildup to the moment. Whilst being respectful you also want to get the photo, so in the final seconds of the heat counting down it was a case of, 'Bugger it, I'm going in!," and I rushed the gate with a few others. Safety in numbers -- Ha! Anyway, John came out the house, hands raised, and proceeded to be showered in who-knows-how-many litres of champagne. Champagne spray can be a hindrance or a blessing, and as the spray was flying around I knew it was on the lens glass, which could cause issues. But I made the decision to work with it, instead of wasting precious seconds trying to wipe it off with a soaking shirt. It worked out, because the flares helped break up the solid black from the flag on the left (I would have loved it if the logo was actually on my side instead of a solid nothing) and then the flare on the top-centre helps frame things as well." "Mick Fanning's first wave back at the J-Bay competition in 2016 -- the year after his encounter with a shark there during the Final -- had so much hype on it, I over-stressed myself. What I love about this photo is that you can see the strapping on his left foot, an injury which could have caused him to pull out of the event. Yet instead he overcame, and went on to win the event for a fairytale ending." "The Quiksilver in Memory of Eddie Aikau opening ceremony in 2016: There is a special energy during the ceremony and I do my best to always attend. You have to work with what is available and light was running out by the time the circle had formed, so I changed plan and went for something which I hadn't done over the years. Knowing there would be splashing and throwing of leis, I moved back, way back because I was shooting with a 70-200 mm lens, and the sunset turned it all into something extra-special."